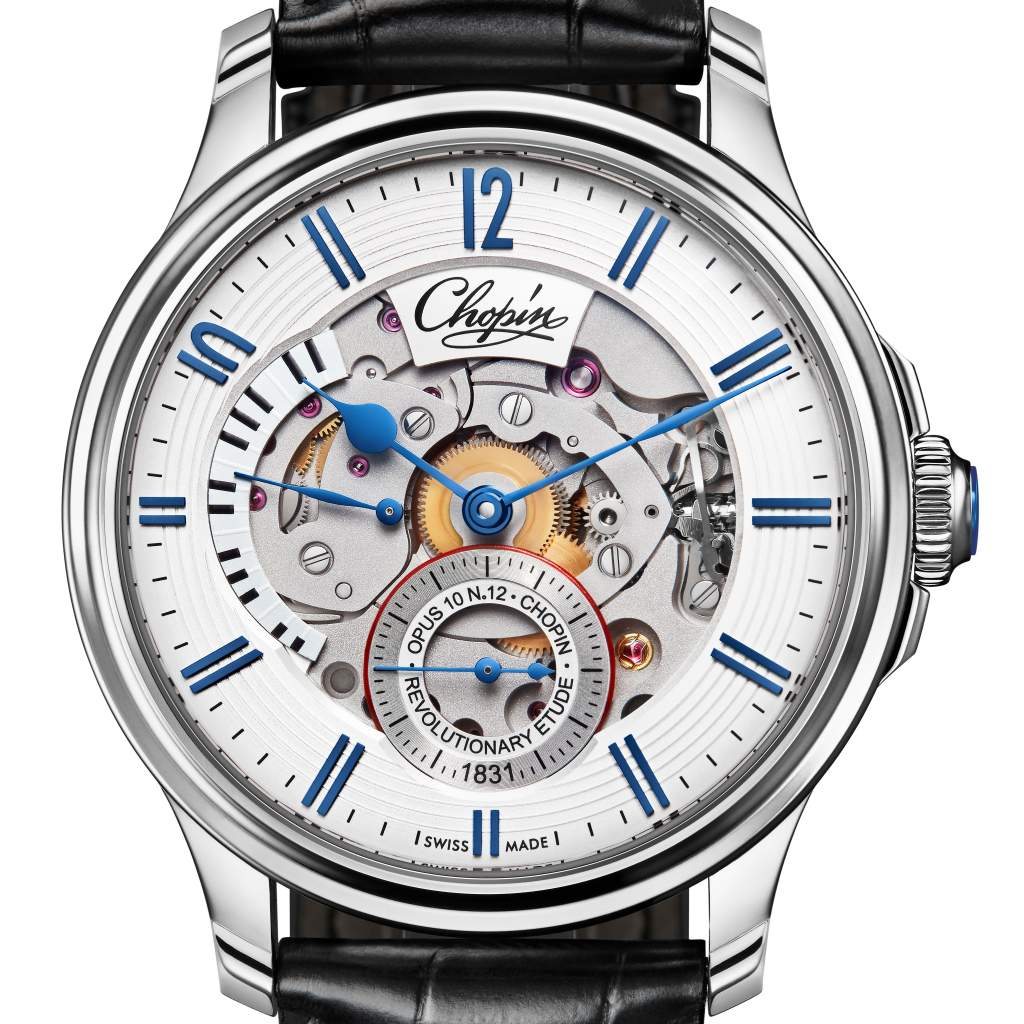 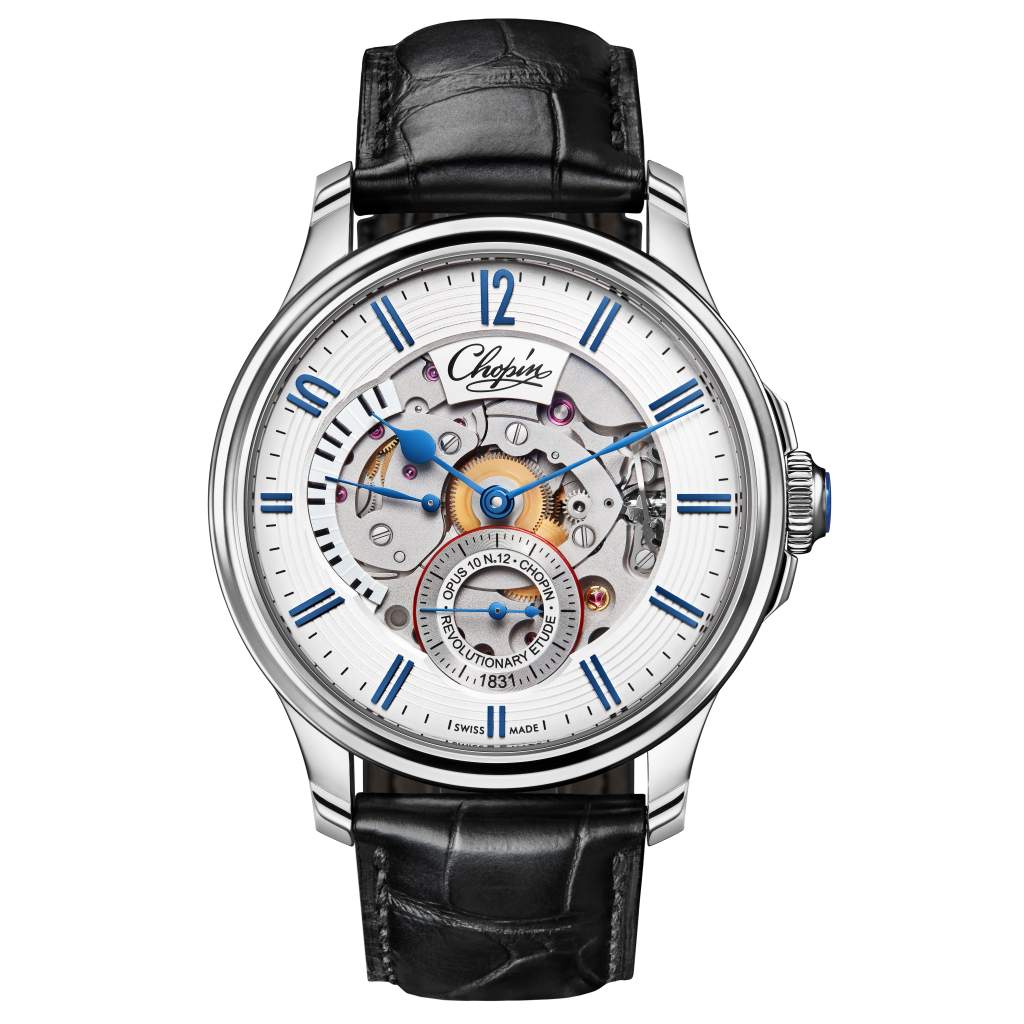 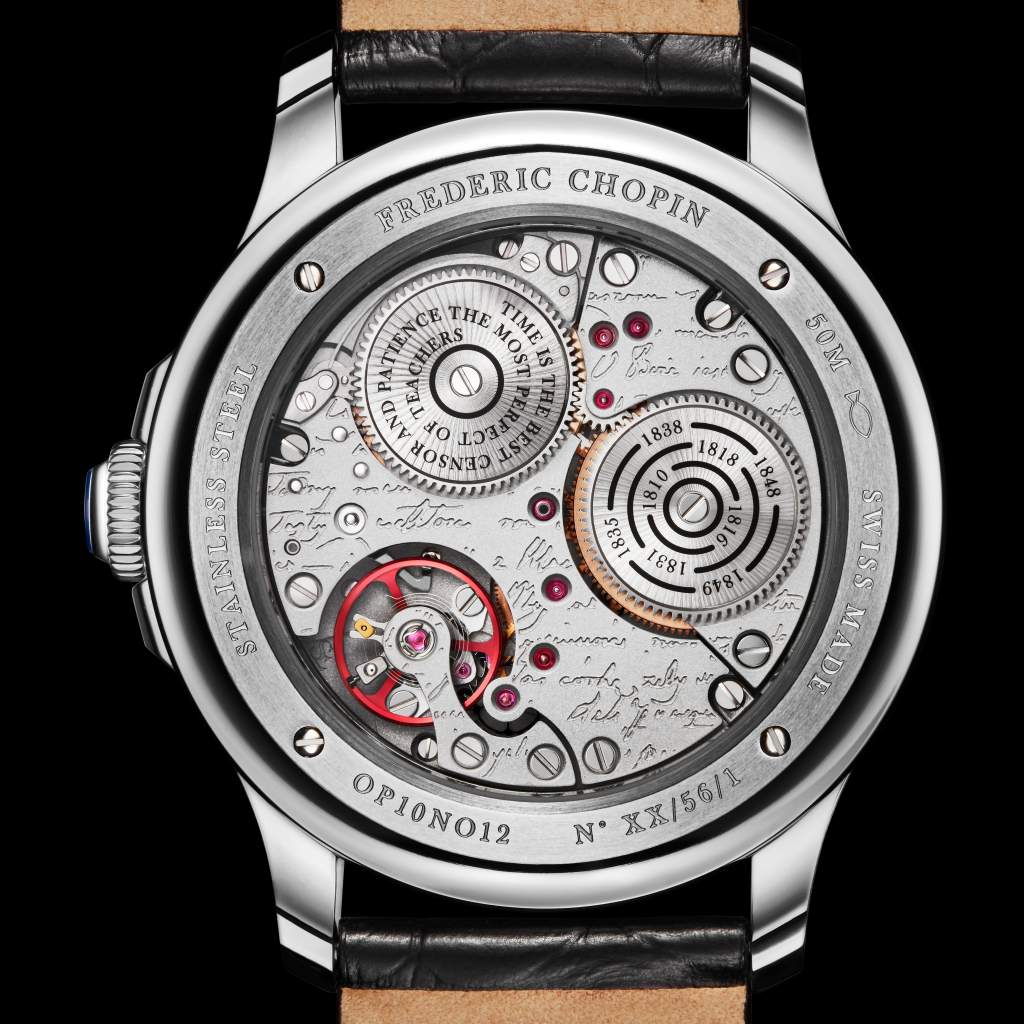 „Time is the best censor and patience the most perfect of teachers” Fryderyk Chopin, 11 October 1846

Chopin as a Symbol

"Time is the best censor, and patience the most perfect of teachers" – Chopin captured the essence of his work with these words, which have been inscribed on the mechanism’s barrel and can be seen through the watch back. Thanks to Chopin’s endless dedication for continuous improvement, his work withstood the test of time.

With his timeless achievements, Fryderyk Chopin became not only a symbol of Romanticism in Europe and around the world, but also one of the most recognizable artists of all time. He symbolizes patriotism, a theme greatly captured by his music. Chopin’s love for his homeland is most perceptible in one of his greatest works – Étude in C minor Op. 10 No. 12, otherwise known as the "Revolutionary Étude". Chopin composed the work in 1831 after learning of the capture of Warsaw and the demise of the November Uprising in Poland. Young Fryderyk hoped to join his friends and take part in the Uprising, but his family and poor health prevented him from doing so.

When news of the Uprising’s failure reached Chopin, who was staying in Stuttgart at the time, he gave voice to his frustrations in the form of a few words jutted down in his private diary : Chopin’s words carry a deep, emotional undertone, which he later expressed in the Revolutionary Étude. Anger, despair, distress, a deep concern for the fate of his homeland – Chopin eloquently transformed his feelings into notes for everyone to experience. Étude in C minor Op. 10 No. 12 is the leitmotif of the Chopin brand’s first model, with the mechanism featuring an engravement of an excerpt from Chopin’s diary to highlight the personal, emotional tone of his work.

„I wrote the previous pages not knowing that the enemy had entered.

– I can picture Marcel taken prisoner – dear old Sowiński in the hands of those rogues!

In order to commemorate Fryderyk’s rich biography, we decided to choose the most important dates from the artist’s life – those which had the greatest impact on his artistic achievements. These dates are engraved on the mechanism’s second barrel and can be seen from the watch back.

References to the artistic achievements of the great composer, including the Revolutionary Étude, are also included on the watch dial. The indexes are placed on a multilevel staff, emphasizing the extraordinary depth of the artist’s music. Numerical indices are placed at the hours 10 and 12 as a tribute to Étude in C minor Op. 10 No. 12. Finally, the left side of the watch face features a power reserve indicator resembling a piano keyboard.

Chopin’s spirit is uniquely captured on the watch face. A red rim made of a precious stone – carnelian – surrounds the sub dial located at 6 o’clock. The volcanic stone’s deep, red color is not only a direct reference to the Revolution and Chopin’s incredible sensitivity, but also symbolizes the composer’s heart, which was embedded in a pillar of the Holy Cross Church in Warsaw on the 96th anniversary of his death, as per Fryderyk’s final will. The urn with Chopin's heart remains there today, while his body rests in a grave in the Père-Lachaise cemetery in Paris.

Fryderyk Chopin’s prodigious ability and devotion to his work made him an object of admiration and praise all around the world. He was a brilliant composer, but also a devoted patriot who expressed his emotions and care for the fate of his homeland by composing his mazurkas and polonaises. One of the most important elements of the mechanism – the balance wheel – captures the symbolism of the heart, which Chopin valued dearly. The deep, red color excellently represents the essence of the composer's heart, and is the very "heart" of our watches.

Manufacturing the balance wheel, otherwise known as the “heart” of any timepiece, requires a great deal of precision and care in order for it to function properly. Our partners at Schwarz Etienne spent a number of months developing a way to create a balance wheel with a deep, red color. The task proved extremely difficult, with every adjustment evoking changes in other elements of the watch. A balance wheel was eventually created, perfected to work seamlessly with our choice of the MSE 210 mechanism. The red balance wheel is a distinguishing feature of Chopin brand watches – timepieces which capture the emotions expressed by Chopin in his work.

A limit on production

Obtaining a license from the Fryderyk Chopin Institute for creating a watch named after the famous composer is both a source of pride and an immense responsibility. The Institute not only strives to promote Chopin’s image, but also fiercely protects it. For this reason, the annual production of Chopin brand watches is limited to 56 pieces.

The Chopin brand values the protection and promotion of the composer’s image. It works with only the best in the industry to create stunning watches representing the world-renowned artist. The brand’s partner Schwarz Etienne, an over 100-year-old, family-owned manufacturer from La Chaux-de-Fonds, has built a reputation as one of the best in the watchmaking industry. Chopin watches are designed by Antoine Tschumi, founder and Artistic Director of Swiss design studio NeoDesis. Tschumi’s unique ability to listen and understand the ideas of his clients brought our vision for exquisite watches to life.