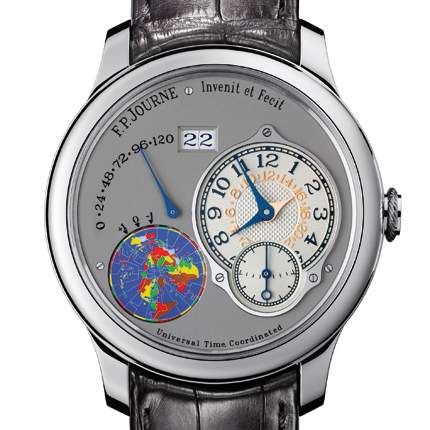 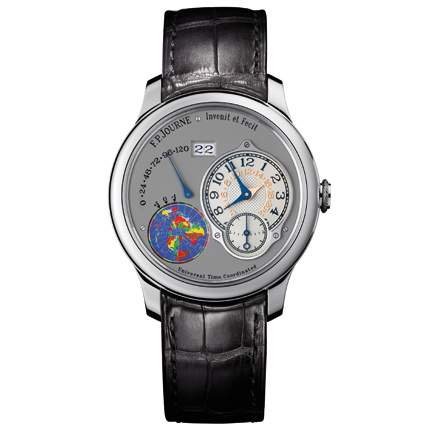 Created in the 19th Century, Greenwich Mean Time (GMT) originally referred to solar time at the Royal Observatory in Greenwich, London. Already used by the British navy to calculate their longitude position from the Greenwich meridian, it was introduced in the United Kingdom by the Railway Clearing House in 1847. It was then legally adopted as official time throughout Great Britain in 1880, and then in the entire world for the major part of the 20th Century, before being replaced in 1972 by UTC, Universal Time, Coordinated.

GMT is usually used in the watchmaking world to designate watches with a second time zone. GMT is based on terrestrial rotation, while UTC on atomic international time therefore the two time measurements are close but not the same.  Unlike GMT, UTC offers the current view of time zone division directly linked to the real rotation of the earth, and less variable.

F.P.Journe innovates once again with the presentation of the Octa UTC®, a patented system that uses the modern standards of determining time zones in full hours. Mechanically it indicates the different time periods linked with the earth's geographical positions, indicating summer and winter hour.

On the dial, the local hours are indicated by the blue hands, and linked to the calendar indicating the current geographical time. The rose gold hand indicates the home time on 24 hours, represented by the earth's 24 time zones.

UTILISATION
The hour of the home time zone is set by pushing the small secured pusher at
4h00. After having pulled the crown in position 2, the wearer moves the globe so that the home time zone is positioned on 0 for winter hour. Simultaneously, the gold hand automatically adjusts itself to the corresponding hour of this region. The purpose of the +1 / -1 indicators is to change the specific region for summer hour which is linked to the geographical location of the user depending if its east or west of the chosen zone.

The mechanical movement with automatic winding is manufactured in 18K rose gold, like all F.P.Journe –Invenit et Fecit watch creations. It is constructed on the 1300.3 calibre, and offers an additional complication to the Octa line, still in the same calibre dimensions. The dial features off centre hours, minutes and seconds, a retrograde power reserve, a large date, and for the first time, a dial with the earth divided in time zones. The passing of the months from 28 to 31 days is done manually.

The OCTA UTC also features the 22K red gold exclusive off centre rotor that winds in one direction only, thanks to an exclusive self-blocking ceramic ball bearing system. Every infinitesimal movement is thus maximally exploited for an optimized winding of the watch. In 2001, F.P.Journe presented the OCTA collection composed of mechanical wristwatches with automatic winding featuring an exceptional power reserve of 5 days (120h), all with the same case thickness regardless of the complication.