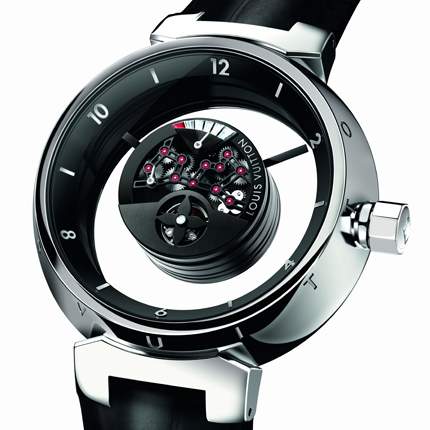 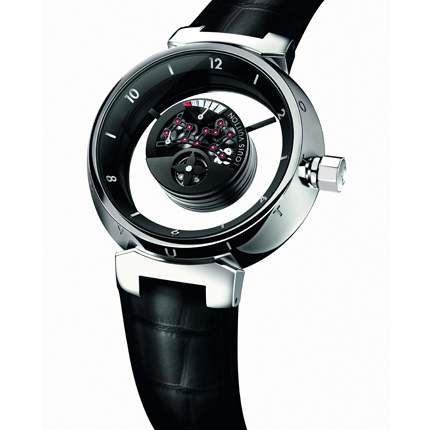 Inspired by the brilliant inventions of Jean-Eugene Robert-Houdin in the 19th century, the Tambour Mystérieuse embodies peerless watchmaking genius: with the finesse of a conjurer, this Louis Vuitton montre à complication somehow completely conceals its own mechanism. The hands hover on an astounding system of transparent sapphire discs; no trace of the watchworks is detectable by the eye. Prowess beyond compare, causing time to float as if by some other-worldly bewitchment.

This is a first in the luggage master's history: a timepiece entirely created, developed, and assembled in the Louis Vuitton watch-making workshops in Switzerland. Perpetuating the prestigious institution of traditional craftsmanship, every element of the calibre “LV115” is rigorously handmade, a technical masterpiece of 115 components. The unprecedented power reserve, too, stands as testament to pure watchcraft virtuosity: 8 days - 8 hours. A tip of the hat to this lucky number, this timeless talisman. Three models have materialised: the first, a resolutely technical creation of clean, minimal lines; the second is classic, sophisticated, accented in brown or gray; the third, a supremely feminine model radiating an aura of jewelled artistry. Though such a triptych may cast the semblance of a silhouette, only the owner of the Tambour Mystérieuse holds the key to the true identity of the timepiece. For, to ensure each Tambour is unique in the world, Louis Vuitton provides a thousand and one ways to claim it as one's very own.

From a vast spectrum of possibilities, each personality summons its own reflection; yellow, white, or red gold or platinum…diamonds, rubies, or sapphires…brilliant or baguette cut… Reminiscent of a conductor nightly bringing forth a new symphonic spectacle with his baton, the owner of the Tambour Mystérieuse weaves a myriad of choices into an original composition, in which sameness and conformity shall never hold a place. And for the ultimate chic, the watch's oscillating rotor can be inlaid with one's own initials, golden marquetry on an unseen sapphire heart. It is far from a mere accessory; the Tambour Mystérieuse is the very breath of a lifestyle.

Lastly, as homage to such extraordinary watchcraft, Louis Vuitton has conjured a case that itself is pure originality: a genuine trunk, prepared exclusively for the Tambour Mystérieuse in the historic Louis Vuitton workshops in Asnières. All the traditional practices are honoured in its making, every standard that has meant the longstanding success of the brand. This tiny treasure chest can also be personalised, from the choice of leathers to the lining's colour; even the legendary LV lock, with a wave of the wand, can have a number matching that of other luggage pieces brought to life by their Monogram maker.

It is a passion for excellence that has drawn such acclaim for Louis Vuitton in the very exclusive world of fine watch-making. Only an elite few – chronometer connoisseurs and luxury timepiece aficionados - will capture the magic, the exceptional savoir-faire of the Tambour Mystérieuse.