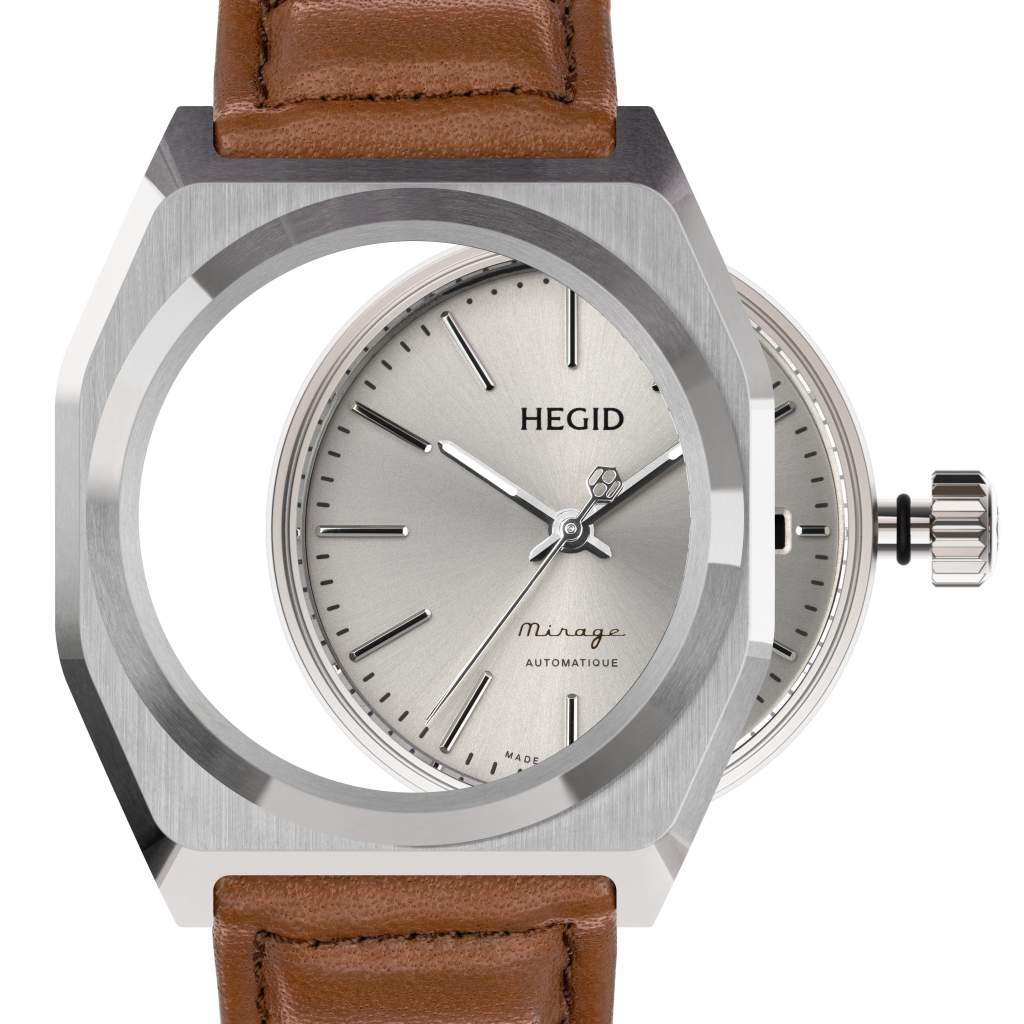 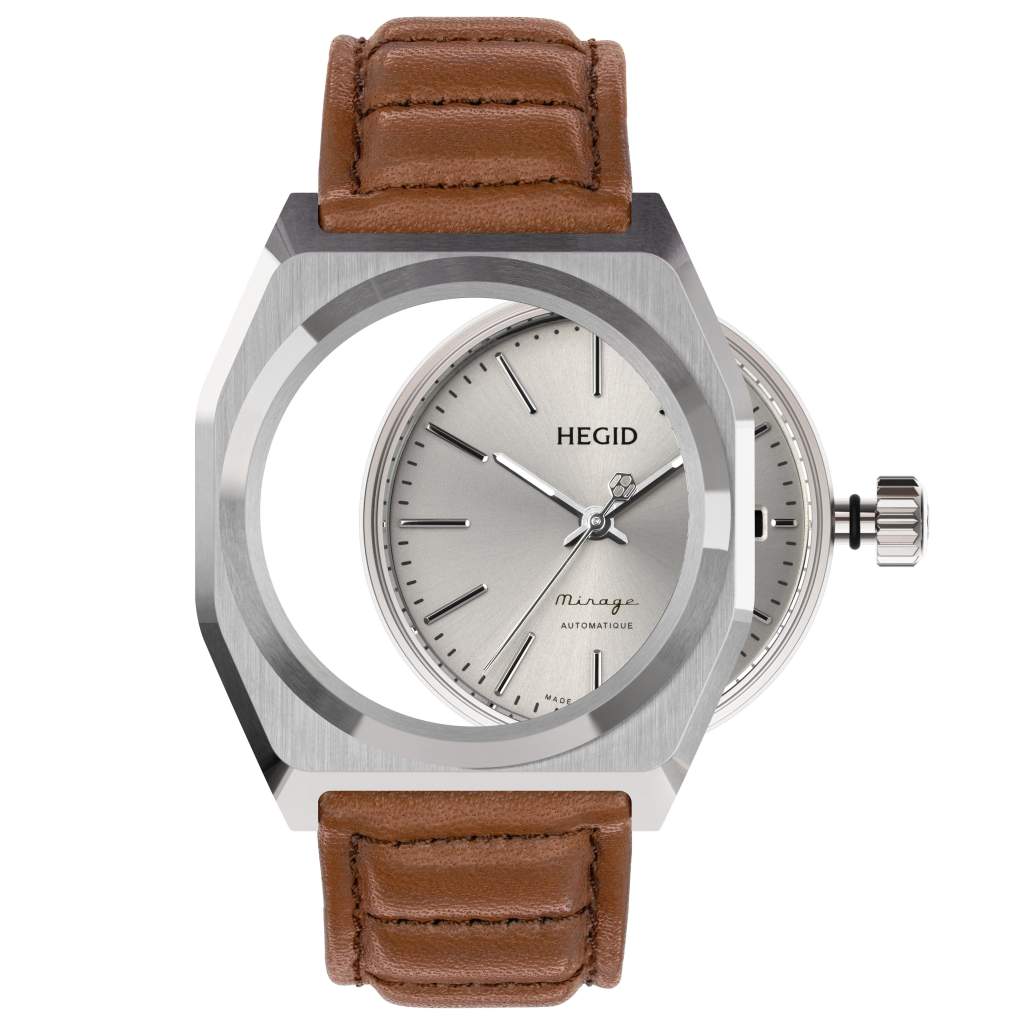 Hegid is a young French company which invented a dressing complication for mechanical watchmaking. Designed from the best materials, with reliable mechanics which has already been proved by major watchmaking Maisons, Hegid watches are made to last for generations. They can also be easily transformed, in a few seconds, to adapt to desires and situations. After purchasing a Hegid watch, anyone can upgrade it with a new carrure, a new capsule or a new bracelet. Created under the guidance of the brand's artistic director, Jerôme Coste, Hegid elements are then a ready-made idea for a gift, and each new element multiplies the number of possible combinations. If every collector is unique as a person, his watch must also be unique. Between the French precision industry and the Swiss movements, most of the manufacturing takes place within a few kilometers, between Besançon and La Chaux-de-Fonds, the world heart of Watchmaking. The requirement in production, the mastery of know-how and the independence of the brand allow Hegid to offer watches of exceptional quality at a competitive price. At a time when our flexibility to adapt is required, the Hegid Maison responds: "Make your Evolution". Make your Evolution, whether in the head or on the wrist.

Hegid®, French Maison of Evolutive Watchmaking, presents its Mirage collection, the brand's new complete watch line since its Inaugural Series. Hegid introduced the patented EVOL® system, which allows its mechanical watches to be transformed in a few seconds while preserving their precise watchmaking properties. A premiere in watchmaking.

Now, the brand is moving forward and strengthens its portfolio with the Mirage collection, the first comprehensive watchmaking creation of its new artistic director, Jerôme Coste. The idea of this watch was born from a mirage, a pure fantasy, the nostalgic dream of a happy era. At the end of the 1960s, between the continuation of the Dolce Vita and the expression of new aspirations, a boundless appetite for freedom was leading to a promising future. This mirage took the form of a romantic ride on an elegant and racy transalpine supercar, more specifically a Lamborghini Miura, on the sinuous mountainside roads of the Italian and then French Riviera, from Portofino to Saint-Tropez. The bold lines of the Italian cars at the genesis of  'Wedge Design' inspired the aerodynamic curves of the Mirage watch. Its design features a retro-futuristic balance in the blend of rounded corners and the frank lines of the chamfer surrounding it.

Hegid watches are made up of three parts. The different elements that compose the Mirage can be acquired separately and adapted to the pre-existing Hegid watches, according to desires and needs, in order to never get tired of our watch. The Capsules, the Carrures and the Bracelets of the Mirage watches are produced in French workshops following a responsible production process, like the entire range of Hegid products.

The Mirage Carrure, the resistant body of the watch, wears a sharp octogonal silhouette in steel. The sobriety of the brushed up satin finish on its surface matches perfectly with the polished metal of the crown and the other metallic details of the Mirage Capsule. This Carrure assembles naturally with the other Capsules of the Maison from both mechanical and aesthetical considerations. Its aerodynamic curves and its robust bezel which is flush with the sapphire glass offer a Coupé profile to this slender watch. Propelled at high speed, attached to the arm that steers the vehicle, while the other hand shifts gears, the Mirage Carrure takes a breath of fresh air and its multiple facets interact with the sun's rays.

The Mirage Capsule, the mechanical heart of the watch, is distinguished by its radiant and sophisticated dial. The delicate moving reflections of the light on its ' Sun ' -finished dial reveal its fine metal hands. These wander between the bright polished steel ‘ stick ’ markers at the precise rhythm of its mechanical self-winding movement.This Swiss watchmaking engine differs from that of the Inaugural Series by the appearance of an aperture indicating the date, a new second hand with the Hegid monogram and a new openworked oscillating mass, marked with the Hegid signature : EVOLUTION. This can be seen on the back, and reveals the technical lacework hidden under the Mirage's dial. After hours of roaming the mountain, on the edge of the abyss, when the heat becomes intense and it is time to take a refreshing bath in a creek, the Mirage Capsule remains on the wrist and plunges into water, up to 100 meters deep, before heading back on the road. Once the destination is reached, the sunset reveals the night and its delights. Once again, the Mirage Capsule, charged with the sun's rays of the day, enables to stroll until twilight thanks to the glow of its luminescent hands and its 40-hour power reserve.

The Mirage Bracelet is another original creation. Its quilted strands suggest the comfortable seats in padded leather, so typical for the sports and grand touring cars of the 60s. The bracelets are made of lined nappa leather and are resistant to both sun and rain. This saddle leather finish is the ultimate touch that marks the intrepid personality of the Mirage.