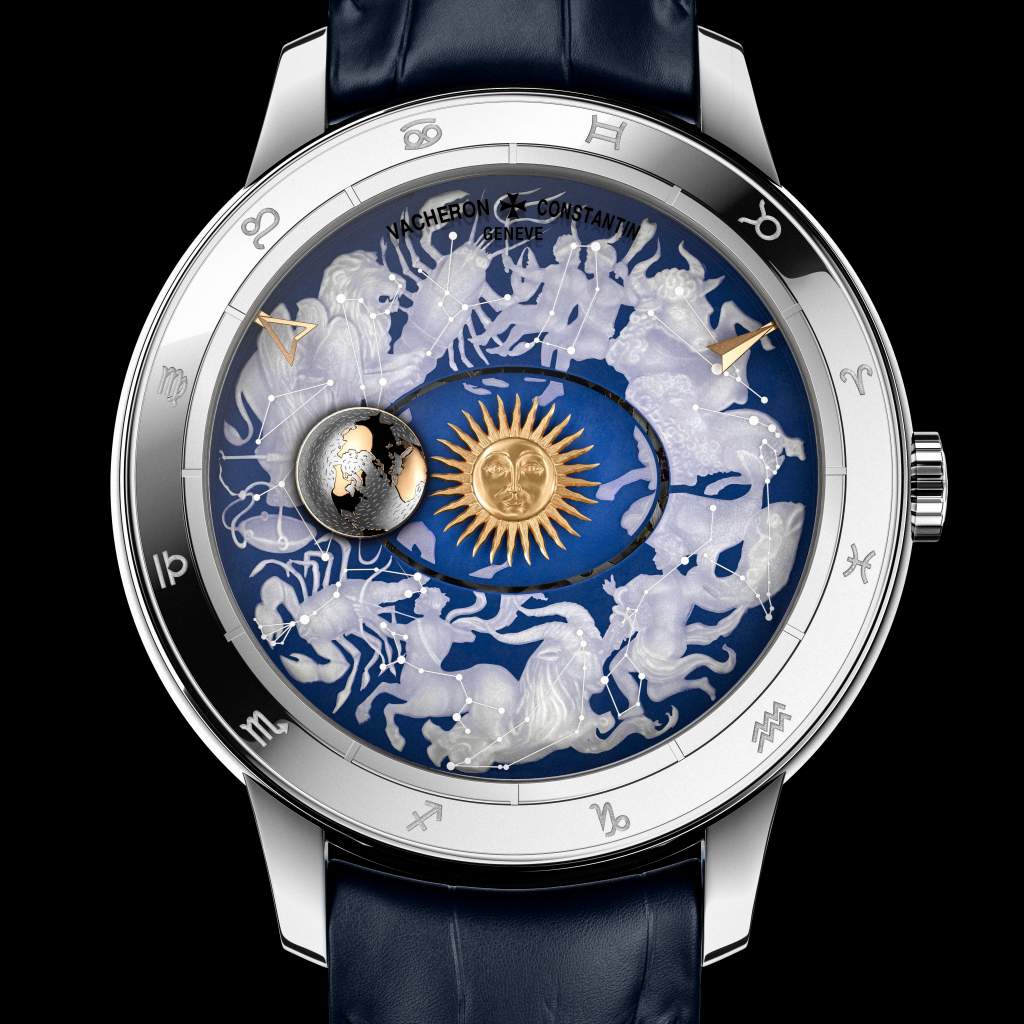 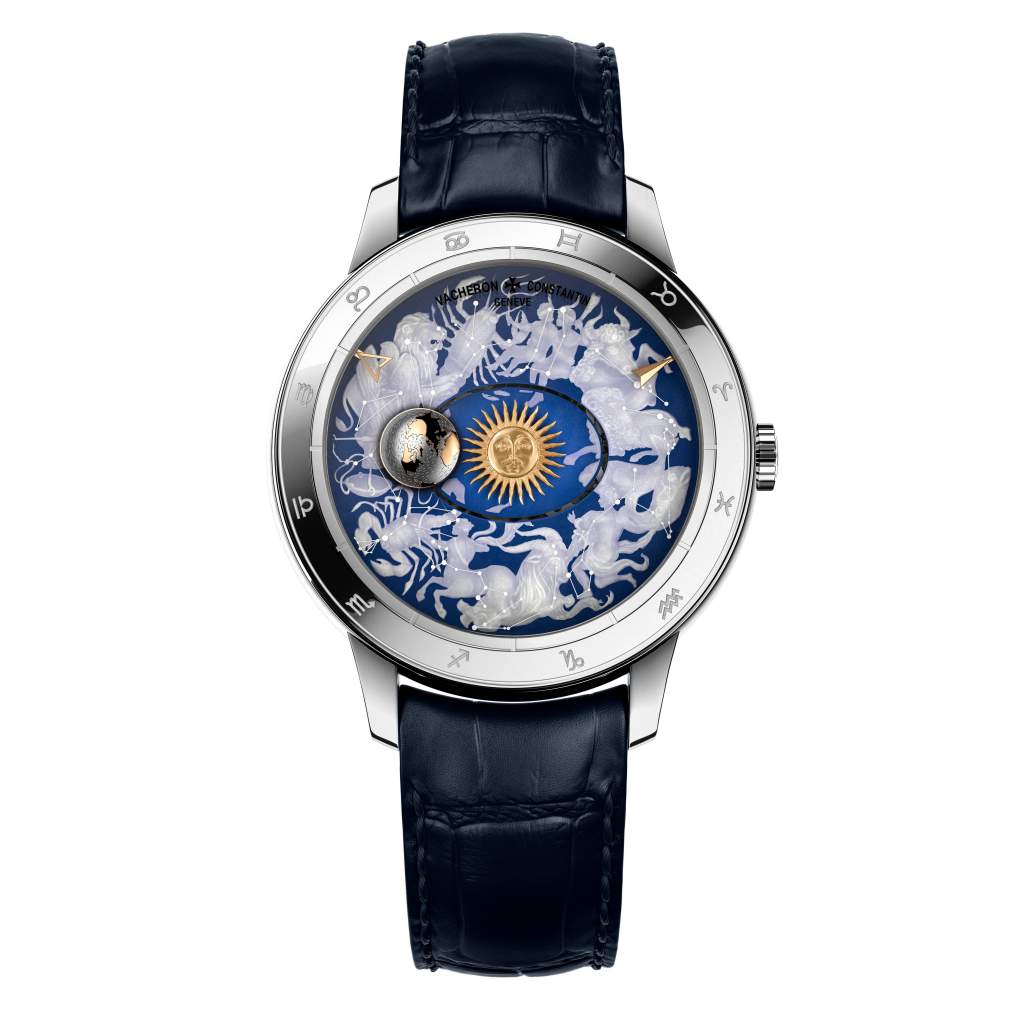 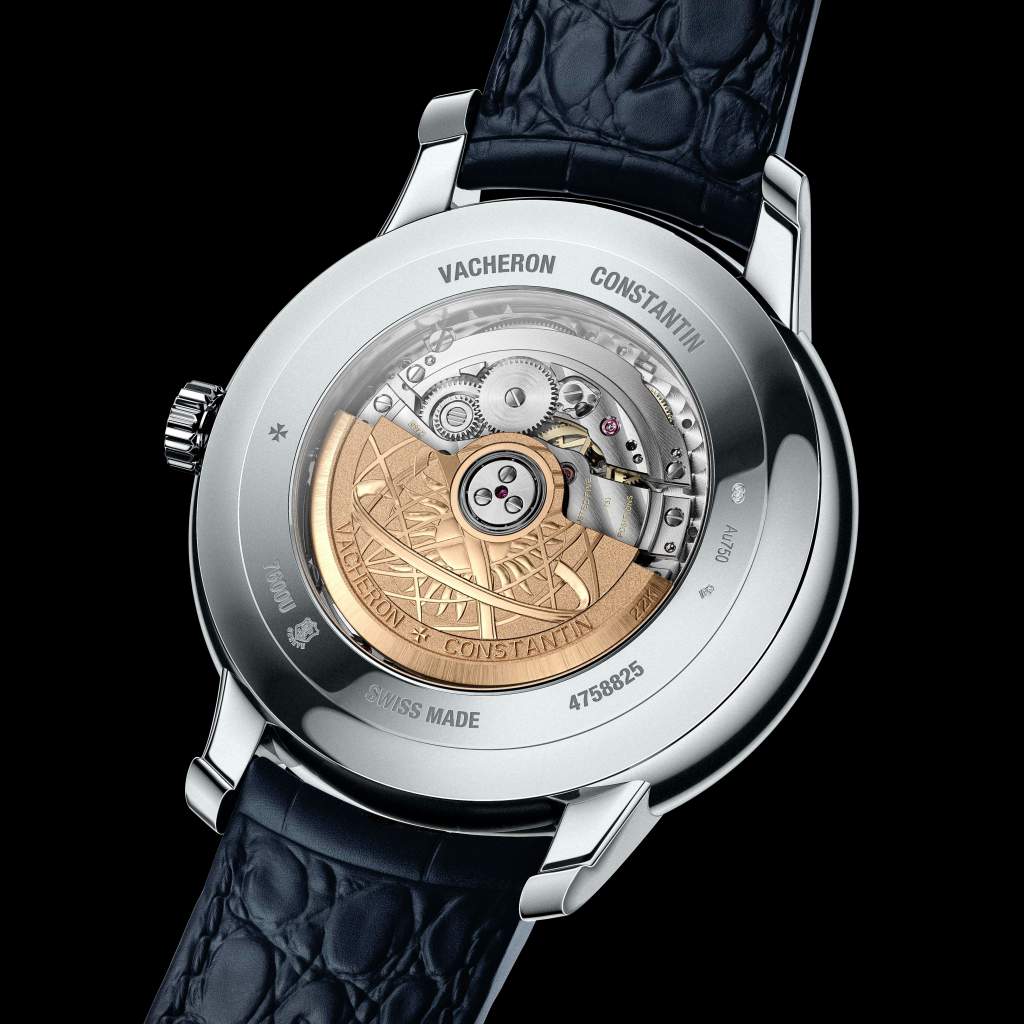 A true artistic mastery is fully expressed through the new Métiers d’Art Copernicus celestial spheres 2460 RT collection, imagined in three different executions. The Manufacture has chosen the formal simplicity of a white gold case to set the scene for the astronomical world according to Nicolas Copernicus. With its original display and spectacular decoration, this collection pays tribute to heliocentrism thanks to the decorative crafts.

Nicolas Copernicus was a mathematician and philosopher, who in 1543 published De revolutionibus orbium coelestium, a work heralding a major astronomical revolution in the history of science. His hypothesis challenged geocentrism, the cosmological system rooted in antiquity and defended by Aristotle and Ptolemy, which held that the Earth is immobile and located at the centre of the universe. In this book, Copernicus put forward the theory of heliocentrism, demonstrating not only that the Earth spins on its axis and has a satellite, the Moon, but above all that it gravitates around the Sun. Several decades later, this theory was to be completed by incorporating the elliptical trajectories of the heavenly bodies. This new vision of space had a considerable philosophical impact on the perception of humanity. It overturned all existing beliefs and ushered humankind from a closed world into an infinite universe. This revolution was to have profound repercussions on all fields of thought. Vacheron Constantin pays homage to these emblematic discoveries that definitively changed the face of the world.

The Métiers d’Art Copernicus celestial spheres 2460 RT collection testifies more eloquently than ever to the creativity of the Vacheron Constantin master-artisans. They have dreamed up three dials with different interpretations of the same theme. The decoration is inspired by the graphic depictions of Andreas Cellarius, a 17th century Dutch-German cartographer, author of the most important colourful sky map, Harmonia Macrocosmica, with its splendidly baroque style. The model presented at the Grand Prix de l’Horlogerie de Genève 2017 subtly combines the Haute Horlogerie craftsmanship to the modern techniques of applied art.

When tradition meets modernity: a combined art of hand-engraving on sapphire crystal and of laser engraving

The dials comprise two distinct parts. Circled by an outer disc, the oval centre bears a Sun with a glowing hand-engraved pink gold face. Between the two, a tiny elliptical groove provides space to display orbit performed by the Earth. The latter is represented by a tiny gold disc, slightly domed and measuring barely 6.8 mm diameter, featuring a polar view of the continents based on a Lambert conic map projection.

The piece presented at the Grand Prix de l’Horlogerie 2017 combines the Haute Horlogerie decorative techniques to the modern engraving. The Earth hand-engraved brought to life on a contrast between the fine graining of the ocean waves and the brilliant glow of the continents. A hand-painted midnight blue underdial is overlaid with a transparent sapphire crystal engraved on its back. Vacheron Constantin has used the innovative laser technique to sculpt the symbols. The engraver then works them over entirely by hand so as to accentuate the raised motifs and play with the opalescent effects of sapphire. On the front, the constellations are laser-engraved and then highlighted with Super-Luminova®. The captivating sight of the sky chart echoing the immensity of the night sky is thus fully revealed in the semi-darkness. To accompany this dance of Earth and Sun, the zodiac signs are complemented by a 3D-effect star-studded sky.

These Hallmark of Geneva certified timepieces driven by a mechanical self-winding Manufacture-made movement, calibre 2460 RT. Entirely designed, developed and created by Vacheron Constantin in a three-year process, it provides the possibility of staging the fascinating view of the sky reproducing the heliocentric system. The time is displayed by two triangular peripheral hands in 4N gold – a cut-out one for the hours and a solid one for the minutes that glide around the dial rim. These pointers are driven by large dedicated wheels positioned on the outer part of the calibre.

The elliptical path of the Earth around the Sun is a key highlight of this watch, exuding a powerful presence and providing continuous information as the days go by. The first complication takes the form of the Earth that spins on its axis in a 24-hour rotation period, corresponding to a mean solar day. The second complication achieved by means of a ‘tropical’ gear train is the Earth’s elliptical orbit around the Sun in 365.2421898 days, meaning one tropical year. An extremely precise mechanism, since the device operating this realistic motion of the Earth requires a one-day correction only once in 8,000 years – an eternity! This degree of precision for such a complication is a means by which the Maison testifies to its commitment to developing new movements. A tour de force serving as a timely reminder that the Manufacture has consistently demonstrated this capacity for innovation in terms of analogue time display, guided by its mastery of horological engineering as well as its creative boldness cultivated across more than 260 years.

The gold oscillating weight appearing on the back of the watch and protected by a sapphire crystal features an engraving on the same theme: a radiant Sun surrounded by ellipses. This 352-part self-winding calibre has a 36–hour power reserve. The perfectly mastered finishing operations are entirely crafted by hand in accordance with the purest Haute Horlogerie tradition.

Twelve stylised zodiac signs are engraved around the rim of the 43 mm diameter bezel. To ensure optimal convenience, all functions the hours, the minutes, as well as the two motions performed by the Earth are adjusted via the crown. The three models are fitted with a Mississippiensis alligator leather strap secured by a gold buckle. They are delivered in a precious presentation wood box containing a magnifying glass providing a chance to admire in detail the finesse of the artistic work accomplished on these creations.