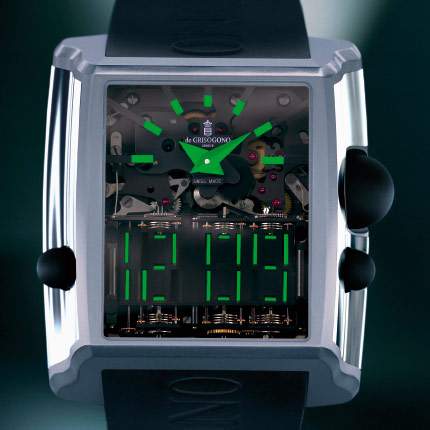 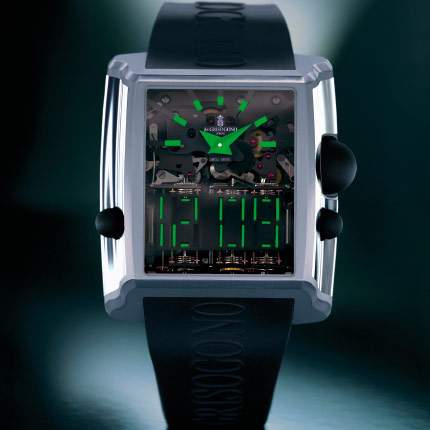 In fine watchmaking, you can decide to reinterpret existing concepts or choose to steer a pioneering course.  Founder and CEO of de Grisogono, Fawaz Gruosi has deliberately chosen the second approach. With the Meccanico dG, the Geneva based manufacturer's most recent entry, de Grisogono  presents a design stemming from the purest watchmaking tradition and projects it into the future. With a total of 651 components, the Meccanico dG's mechanical movement is one of the most complex ever made. A masterpiece of fine watchmaking, designed to display the time in two time zones, it ranks as the world's first watch with a mechanical digital display as well as an analogue face. This world first - based on a de Grisogono patent -  places a startlingly complex mechanism in a very contemporary design.

To celebrate his company's 15th anniversary, Fawaz Gruosi decided to explore an area where no watchmaker had ever been:  the digital display driven by a mechanical system exclusively. Despite the considerable audacity and the measure of recklessness this extraordinary project demanded, Fawaz Gruosi  never looked back. For him,  watchmaking goes hand in hand with innovation. With its patented dual analogue and mechanical digital display, the Meccanico dG springs from a totally innovative concept in the world of traditional horology. A single mechanical movement, two time zones, two types of display: the Meccanico dG breaks truly new ground; for the first time in watchmaking history, a digital display and mechanical power come together successfully.

In the meantime, traditional watchmaking has undergone radical change; through wave after wave of innovation and increasingly impeccably finished products, it has  conferred on the most highly complex timekeepers the status of objets d'art. But watchmakers had up to then never challenged the digital display's basic technical principle. Meccanico dG has now achieved this, making  history as it propels Haute Horlogerie to a stunning new level.

The Meccanico dG is an assemblage of microsystems featuring highly sophisticated cam and gearing mechanisms. A proprietary de Grisogono calibre, its hand-wound movement comprises 651 components. It offers an analogue display of the hours and minutes on the upper  dial and the digital display of a second time zone on the lower section. The latter features the tens of hours, the hours, the tens of minutes and the minutes. The mechanism is activated via movable micro-segments driven by a set of 23 cams combined with gears plus a triggering and synchronization device.

23 horizontal and vertical micro-segments are  involved in displaying the time digitally. The vertical segments are 4.55 mm high and the horizontal segments have a display length of 1.80 mm. Each segment has four faces: two visible faces opposite each other with coloured inserts and two invisible faces, also  opposite. One or more segments rotate 90° to turn one time indication into the next. The jump is instantaneous while anywhere from 1 to 12 segments move, depending on the time being displayed.

This radically new dimension in fine watchmaking extends to the Meccanico dG's trim contemporary design. Its intricate mechanical construction, not least the cam and gear systems, can be observed through the watch's transparent dial. Also fitted with coloured inserts, the hour markers for the analogue display seem suspended in mid-air to allow a glimpse of their mechanical driving system. Just like all de Grisogono movements, the Meccanico dG calibre features an immaculate black finish. “de Grisogono” and “Swiss Made” are inscribed on the movement itself while the back of the watch features a small plate inscribed with “Meccanico dG”.

Despite the power required for the dual mechanical and digital display and the torque essential for the instantaneous rotation of the micro-segments, the proprietary de Grisogono hand-wound calibre fitted in the Meccanico dG  has a power reserve of some 35 hours. The latter is displayed by a hand in a 90° sector on the back of the movement and is visible through a shaped crystal caseback giving a glimpse of the brand's famous emblematic scrolls.

The Meccanico dG case matches its outstanding movement. Imposing in size (56 x 48 mm), innovative in design, water-resistant to 30 metres, it comes in a choice of pink gold, titanium, titanium and rubber, titanium and pink gold or titanium and platinum. In keeping with the watch's futuristic character, its correctors and crown cover are vulcanised rubber. A crown at 3 o'clock controls the analogue time display. Two correctors serve to reset the second time zone; the left-hand one controls the hours, the right-hand one the tens of minutes and minutes. The strap is also fashioned in natural vulcanised rubber and features a deployment clasp adorned with the de Grisogono emblem.

An outstanding design enhancing an exceptional de Grisogono watchmaking year, the Meccanico dG is being fashioned in a limited edition of 177 watches.