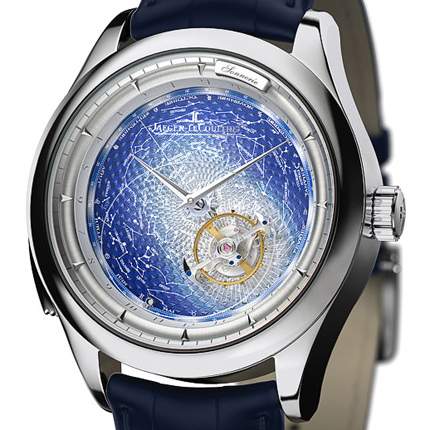 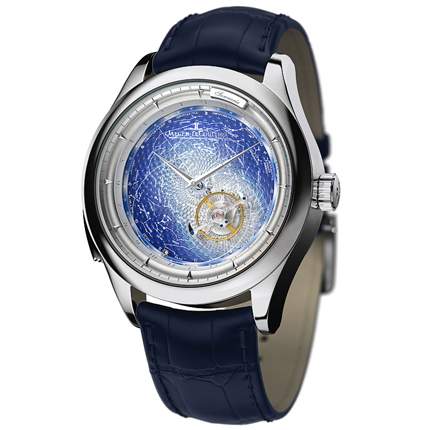 With the new Grand Complication watch in the Master Grand Tradition series, Jaeger-LeCoultre again demonstrates its attachment to its horological roots as well as its drive to bring watchmaking in line with the latest in research and development. The watch incorporates three complications that elegantly mingle homological history with cutting edge technology: a minute repeater, a flying tourbillon and a zodiac calendar – each a highly regarded complication of its own right and all constructed according to the latest of watchmaking standards and combined through the romantic soul given by true horologists, whose work is deeply rooted in their art.

This is the first time that Jaeger-LeCoultre is presenting a Grande Complication within the Master Grande Tradition line. However, as one of the driving forces in the world of high horology, the manufacture didn't dwell on copying this marvelous concept; instead the watchmakers were keen on setting new standards by reinterpreting the idea from a modern viewpoint.

Traditionally a Grand Complication consists of three watchmaking complications. One providing an astronomical information – such as a perpetual calendar – the second a sounding system such as a minute repeater – and a third one showing one or more additional hands, usually a chronograph, but it could be any other complication, for instance, a tourbillon.

In the new Master Grande Tradition Grande Complication however those three complications do not merely coexist in the platinum case – they are intertwined in an almost poetic way: For the essence of the watch lies in its interpretation of astronomical timekeeping for the wrist. And there couldn't be a better driving force than the pulsing heart of a flying tourbillon rotating around the dial, depicting a sky-chart of the northern hemisphere.

Enhancing the astronomical aspect, the tourbillon doesn't count the passing minutes of the official day with its 24 hours, but it counts the time of the so called Sidereal Day, which is almost 4 minutes shorter than the solar day. A small sun rotating around on the outer spheres of the dial, where zodiac signs and an indication for the twelve months round off the heavenly display, indicates our ‘official' time, also known as Mean Solar Time.

Its brand new Jaeger-leCoultre Calibre 945 is a highly complex mechanism with 527 parts, all of which require the hands of a single watchmaker to be assembled and adjusted. Concerning precision, it relies on the latest technology: a flying tourbillon sets the beat with an advanced silicium-escapement, specially developed for use within an ultra-light titanium cage.

Additionally, the watch incorporates an innovative minute repeater, the result of five years of research, where the sound is generated by an ingenious ‘crystal gong' system in which form-improved gongs are attached to the watch glass. Together with a new striking mechanism called ‘trébuchet hammers', delivering 80% additional power to that of ordinary gong mechanisms, the watch offers an unprecedented clear and harmonious full sound at the simple push of the slider mechanism.

Its classically shaped platinum case and the movement-parts finished to the highest of watchmaking standards are witness to the experience of 177 years in high watchmaking, which Jaeger-LeCoultre can look back upon. Meanwhile, the ultra modern siliceous escapement is a clear marker of the innovative spirit that drives the manufacture to the present. This unique combination makes the watch a true contender for the annual theme of “Invention through movement”.