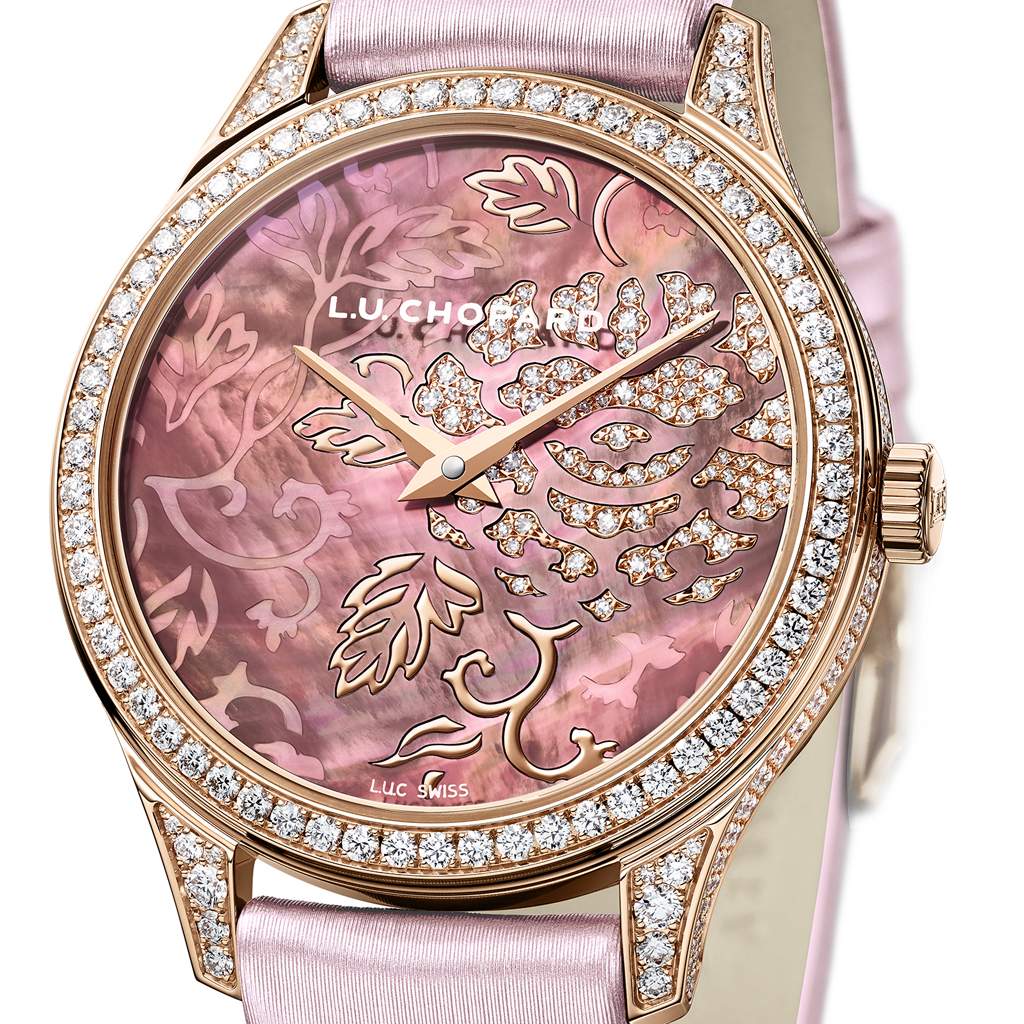 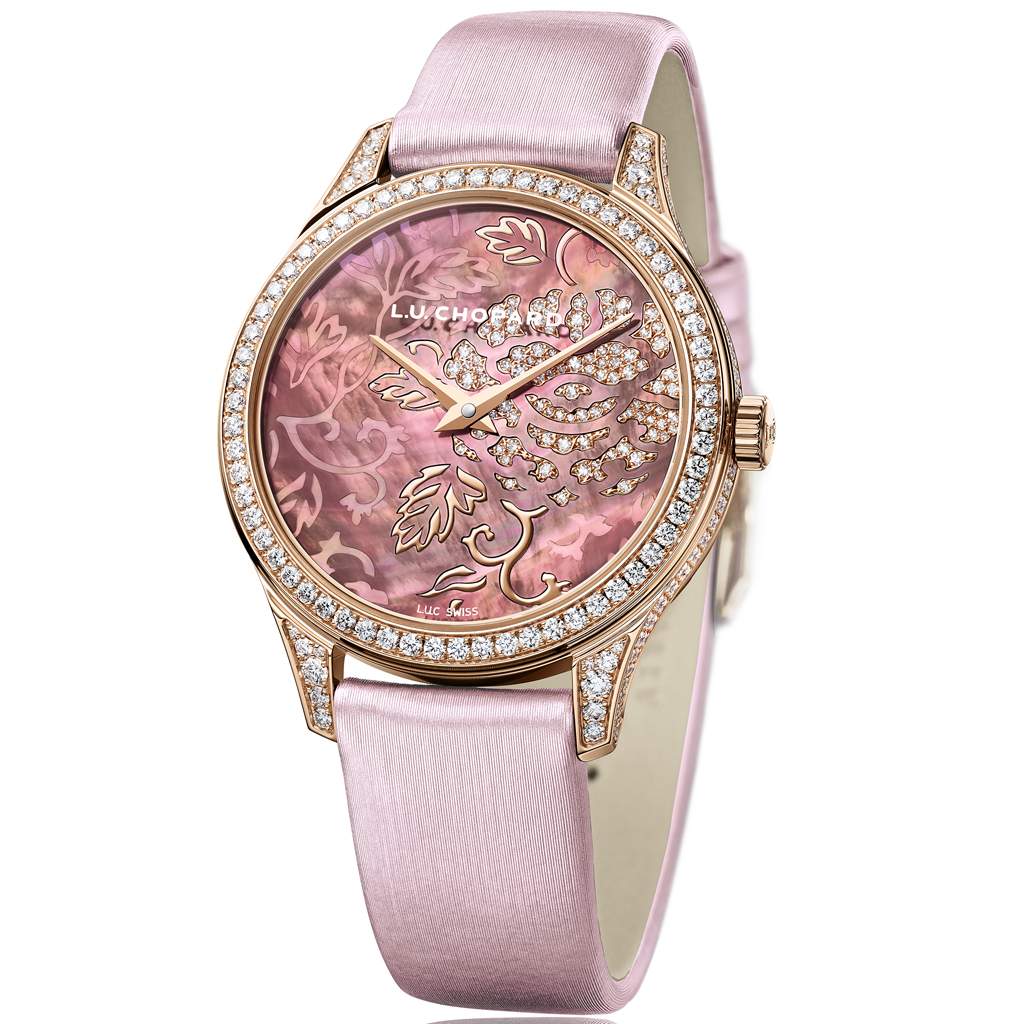 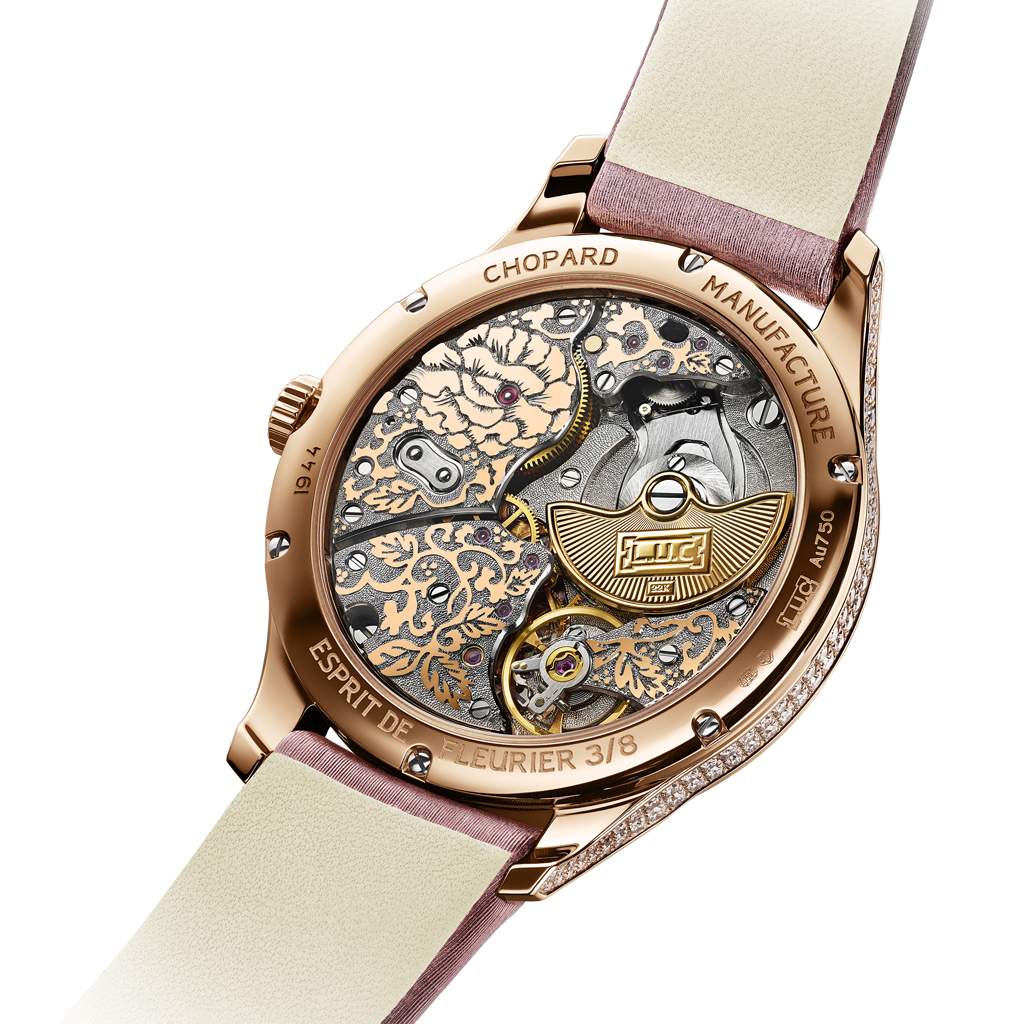 Its understated elegance and its technical sophistication have made the L.U.C XP a flagship model among the Chopard Haute Horlogerie collection of L.U.C watches. In 2014, Chopard created a version with a 35 mm diameter, in smaller size, intended for women. The beating heart is the L.U.C 96.23-L calibre. It’s produced by Chopard Manufacture and graced with Fleurisanne engraving, an almost extinct handcraft. Where beauty meets precision, a gorgeous peony blossoms in a 8-piece limited edition watch: the L.U.C XP 35 mm Esprit de Fleurier Peony.

This legendary flower has been casting its velvet-smooth spells across legends and fairy tales since the dawn of time. Today, the peony unfurls its silky petals and delicate scents onto the famous Chopard timepiece. It adorns the dial and the manufacture movement of the L.U.C XP 35 m Esprit de Fleurier Peony, an eminently feminine model governed by the principles of Haute Horlogerie. The dainty curves of the peony bloom on the Tahitian mother-of-pearl dial, where this majestic flower appears clothed in gold and decked in diamonds finely set into the rose gold dial base.

It was in 2014 that the first ultra-thin L.U.C watch was created in a 35 mm diameter, to offer women a version exclusively made for them of a watch that they previously tended to borrow from men. This model with its light, subtle and timeless lines is powered by a high-precision movement produced by Chopard Manufacture.
In 2015, the design codes of this supremely elegant watch took a new turn with the L.U.C XP 35 mm Esprit de Fleurier and this model is now reborn in an eight-piece limited edition featuring a peony motif and fitted with a brushed pink canvas strap. It highlights an increasingly rare ancestral technique: Fleurisanne engraving.

A flower from the East

A central figure in Greek and oriental mythology, the peony suffuses countless legends with its delicate fragrance. The peony originated in central Asia and was initially cultivated as a medicinal plant. Used as a remedy for various conditions, it came to embody good health, before being associated with an increasing number of virtues. This flower acquired symbolic status as a harbinger of good luck, abundance and happy marriages, and has represented wealth and honour in Asia ever since. Under the Tang dynasty, peonies were grown on a massive scale and the destiny of this flower was even linked to that of the country, with the blossoming of the peony reflecting the prosperity of China itself. In addition to its exquisite loveliness, it was of course also appreciated for its aesthetic qualities, its opulence and its incredible scent. It adorned imperial palaces and inspired artists who interpreted it in all its forms, raising it to the rank of a symbol of springtime and a metaphor of feminine beauty in Chinese tradition and imagery. Its extraordinary allure has won over every culture and now finds unexpected expression in the Swiss village of Fleurier…

It was in Fleurier, a village of the Jura region of Switzerland, that Karl-Friedrich Scheufele founded in 1996 a Manufacture dedicated to producing high-precision movements: the L.U.C Haute Horlogerie collection, thus named in tribute to Louis-Ulysse Chopard. In 20 years, Chopard Manufacture has succeeded in taking its place among the select circle of authentic watch manufactures and is unanimously acknowedged as such, both within the profession and among the public at large. All stages in the development and production of L.U.C watches are conducted in-house, in Fleurier. This vertical integration testifies to deep-seated independence, a value firmly ingrained in the Chopard corporate culture.

Fleurier is a historical cradle of watchmaking that has given rise to a number of skills that are now becoming increasingly rare. Chopard wished to perpetuate these traditions that represent a cultural and aesthetic heritage.  Fleurisanne engraving is one of these decorative artistic techniques that are an integral part of the horological heritage: in the 19th century, it contributed to the magnificent reputation of the region’s watchmakers, whose timepieces adorned using this craft were in demand as far as China.

Chopard restores the noble pedigree of this form of artistry through the L.U.C XP 35 mm Esprit de Fleurier Peony. Its rose gold movement is adorned with the peony motif according to the Fleurisanne engraving technique. This highly distinctive expertise is notably distinguished by its raised motifs. The engraver ‘spares’ the motif that he intends to make stand out; the surface thus preserved is then engraved with scrolling patterns or flowers, and then polished to achieve a shiny effect. The base surrounding the motif is then stippled dot by dot to create a grainy effect. To perform this slow and lengthy process requiring extreme dexterity, Chopard has trained expert hands in-house to perpetuate this traditional skill. After engraving, the movement is rhodium-coated to achieve an unusual two-tone appearance.

This movement is endowed with the patented Twin® technology, involving two stacked coaxial barrels ensuring a 65-hour power reserve. Accommodating such a self-winding movement within a 7.5 mm ultra-thin case is a daunting technical challenge. The clever micro-rotor construction has enabled the master-watchmakers of Chopard Manufacture to accomplish this feat and successfully magnify the beauty of L.U.C Calibre 96.23-L.