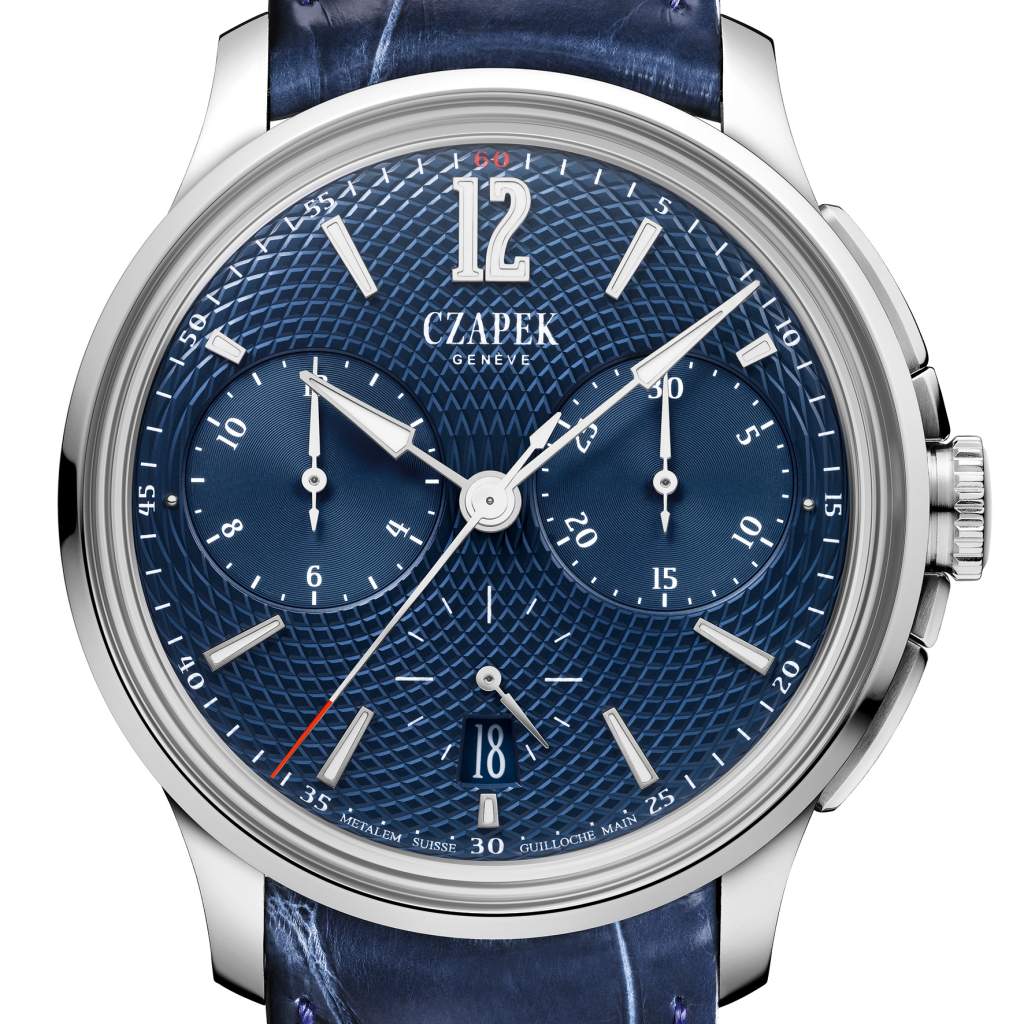 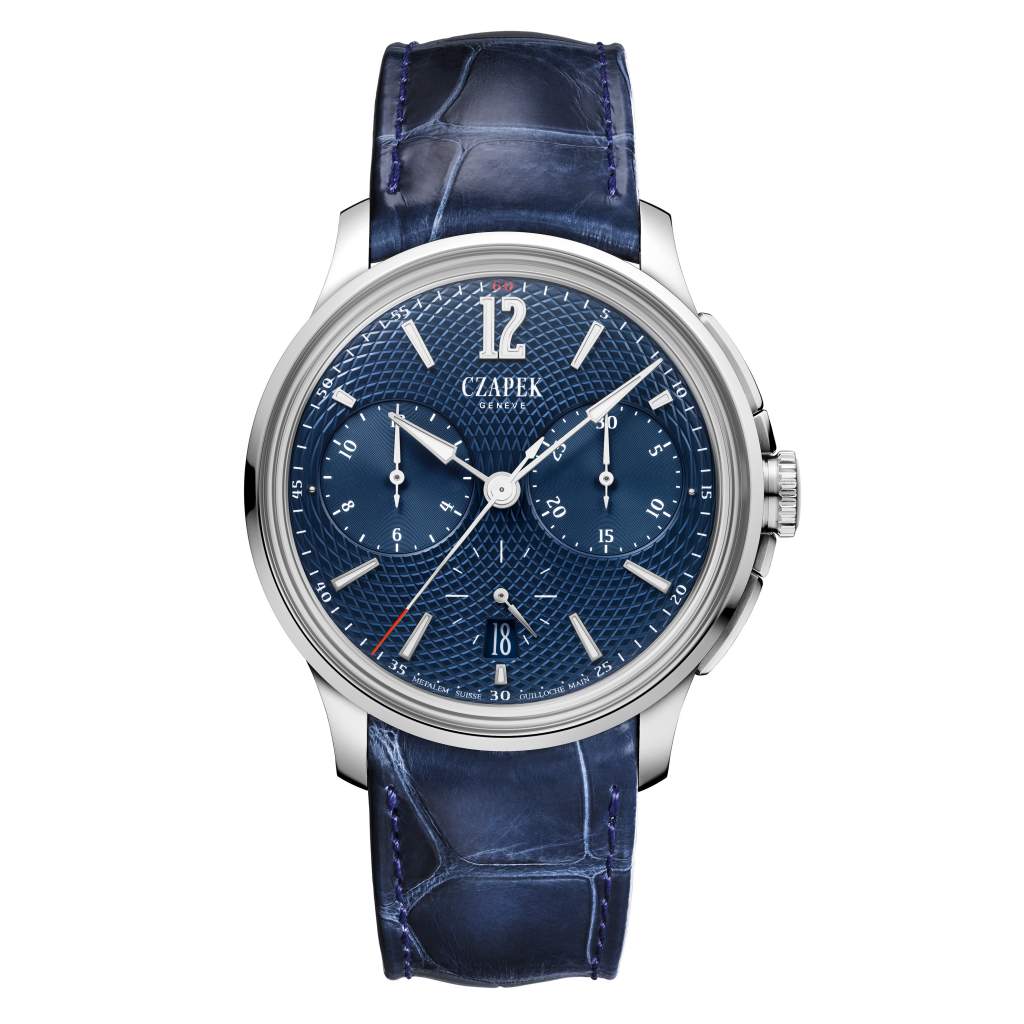 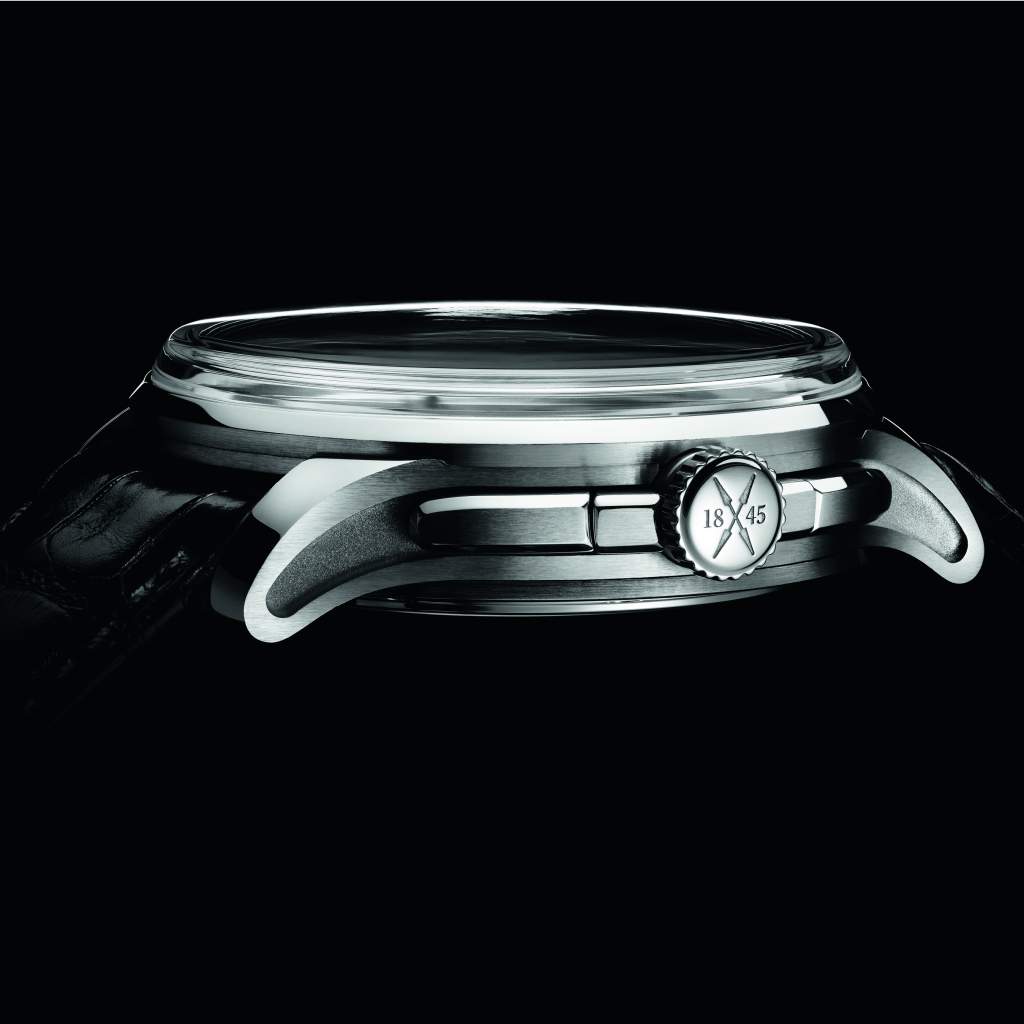 The dial, under an edgy sapphire crystal, is also unmistakably Czapek: The two signature subdials have been enlarged and moved up to 3 and 9 o'clock positions, where they now display the chronograph's minutes and hours respectively. A small seconds subdial shares the date spot at 6 o'clock. The razor fine "trotteuse" chronograph hand stands out thanks to its bright red tip, which homes in on an equally visible "60" at the top of the hour.

The Faubourg de Cracovie dial reintroduces the fascinating guilloché "Ricochet" of the Quai des Bergues collection. Intersecting circular lines form a pattern of bas-relief squares that make the dial come alive, recalling the wave interference pattern a stone might make when ricocheting on water. This traditional technique was made possible by the rose engine lathe, which was devised in the late Eighteenth century and became a key machine in fine dial-making. The Ricochet design goes back to François Czapek himself.

The new model is called “L’Heure Bleue”, a romantic inspiration related to Nature. The “Heure Bleue”, “Blue Hour”, a nautical term, is a period of twilight in the morning and in the evening when the sun is below the horizon and the residual sunlight takes on a predominantly blue shade. On a clear day, blue hour can be a colorful spectacle, treasured by many artists.

Czapek's first chronograph is driven by a bespoke automatic movement, the SXH3. This integrated column-wheel chronograph movement was built by the outstanding craftspeople at Vaucher Manufacture Fleurier in the Jura mountains, the cradle of Swiss watchmaking. It delivers 65h power reserve from a single barrel that drives the balance wheel at 36,000 vph. The movement makes use of some of the most advanced and effective mechanical elements, like the linear hammer, which reduces wear and tear on parts and resets all the associated dials in one easy movement. A modern solution, the vertical clutch, ensures a perfect start for the chronograph hand. Finally, the diamond-blasted anthracite bridges give the final aesthetic twist to the movement visible through the transparent case back.

The Faubourg de Cracovie chronograph is the company's third collection and was named after the location of Czapek third boutique, which he opened in 1850 in Warsaw, Poland. The calibre inside is also Czapek's third, following the seven-day manually-wound movement in the Quai des Bergues and the suspended tourbillon with GMT in the Place Vendôme, both famous locations of the late François Czapek. The Faubourg de Cracovie represents another major milestone in the company's modern history... for the pleasure of watch lovers and collectors world-wide.