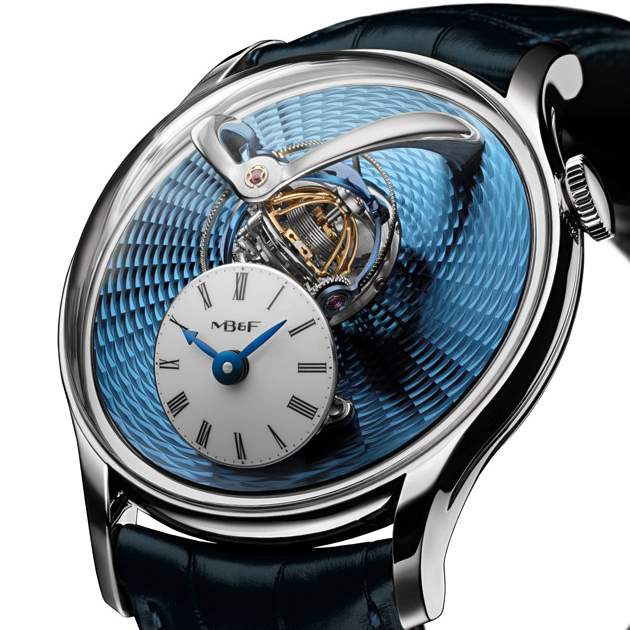 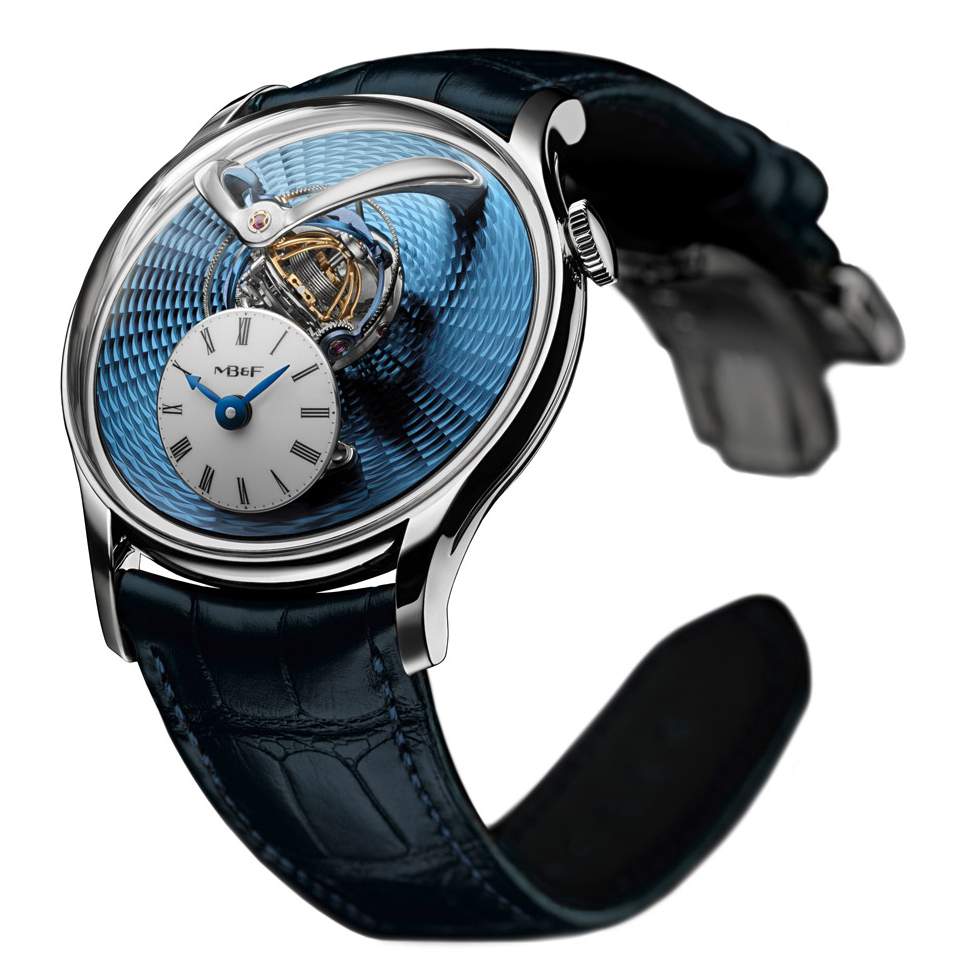 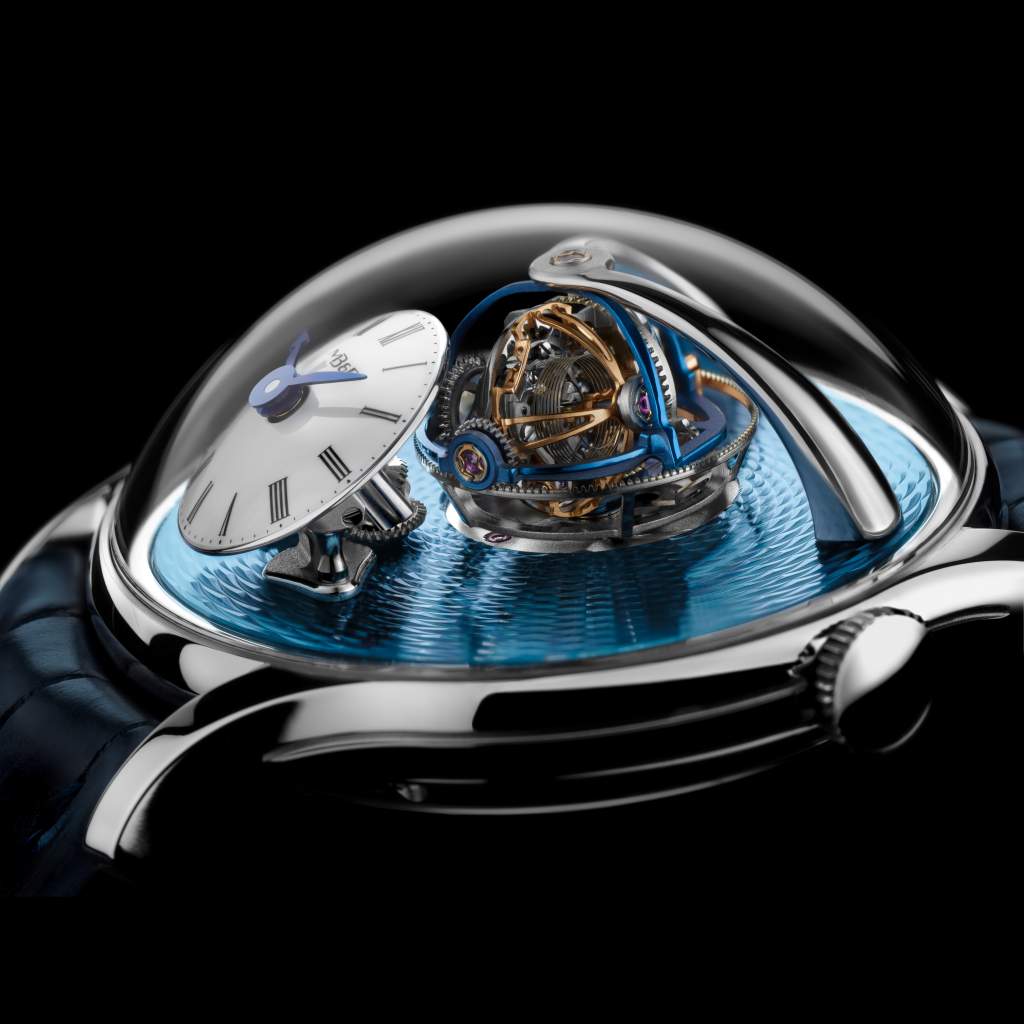 Meteorological science tells us that when cold and warm currents meet, all manner of dramatic weather ensues. Storms, freak atmospheric conditions and even tornadoes have been known to follow. So when two very different master watchmakers come together – one a legendary innovator from the Vallée de Joux known for his unorthodox, jaw-dropping complications, the other a famed perfectionist and acclaimed pillar of traditional craft based in Môtiers – look out for lightning on the horizon.

Rising above a sea of blue guillochage is a rotating spherical mass of gears, pinions and cages. Somehow, from this chaos of motion, order is extracted. Time is indicated on an inclined dial of stretched lacquer, proving that even the wildest horological whirlwinds can be tamed into the logic of hours and minutes.

MB&F founder Maximilian Büsser says, “One of the many things that makes me incredibly happy about this piece is that we got to bring together two people I adore in this industry; who are incredibly talented, have completely different styles and personalities, and have never had the chance to work with each other”.

Once taken, such chances can reshape entire landscapes. MB&F’s only directive to Eric Coudray initially was to “make the craziest, most cinematic three-axis tourbillon ever.” Having been given free rein to create, Coudray built something that was entirely new in his experience: a mechanism that goes beyond the tourbillon, the proprietary new MB&F ‘TriAx’.

The new TriAx mechanism, as showcased in Legacy Machine Thunderdome, fulfils MB&F’s directive to Eric Coudray in spectacular fashion. The triple-axis rotating escapement has a stripped-down construction that transgresses both tradition and modern convention. Instead of the rational (and cumbersome) system that associates one cage with each rotational axis, the TriAx defies logic with a three-axis, two-cage configuration that allows for unprecedented visibility of the Thunderdome’s beating, whirling heart.

In a second stroke of whirlwind audacity from Coudray – whose name is practically synonymous with audacious watchmaking in the 21st century – the TriAx mechanism of LM Thunderdome uproots our most familiar notions of watchmaking escapements. Controlling the rate at which energy escapes from the barrel is the unusual Potter escapement, which utilises a fixed escape wheel in place of the mobile escape wheels seen in virtually every type of modern rotating escapement. The fixed escape wheel of the Potter escapement – named for 19th-century watchmaker and inventor Albert H. Potter – allows for higher rotational speeds in such a mechanism.

Integrating a fixed escape wheel within a tri-axial rotating mechanism is something that has never been done before, but LM Thunderdome achieves this, and for good reason. The high-speed rotation consumes energy voraciously, with the innermost structure completing one turn in 8 seconds, the intermediate cage rotating once every 12 seconds, and the outermost cage making one full rotation every 20 seconds.

An additional advantage of the Potter escapement is that it frees up more space for the balance and hairspring, allowing to better admire another completely novel development: the balance of LM Thunderdome takes a hemispherical form, wrapping around the helical hairspring for an unprecedented configuration of regulating organ in both modern and classical watchmaking.

Even for a seasoned watch connoisseur, deeply familiar with multi-axis tourbillons over the 15 years since this type of mechanism debuted on the horological scene, Legacy Machine Thunderdome is an eye-opener. Not only is it faster, its components whirring past at dizzying speeds – it is larger, thanks to the offset axis of the outermost cage that increases the overall displacement of the balance, and it is showcased like no other. The pronounced arch of the sapphire crystal dome allows Eric Coudray’s opus to sit fully above the dial plate, visible from all sides.

As difficult as it may be to tear your eyes from the dial-side spectacle, the reverse of the LM Thunderdome engine is equally rewarding. The manual-winding, triple-barrel movement may have been technically conceived by Eric Coudray, but its aesthetics are fully Kari Voutilainen.

Countless sessions passed between the two watchmakers until the untrammelled dynamism of Coudray’s engine design took on classically elegant forms. Smoothly rounded bridges, incorporating sharp hand-bevelled internal angles and mirrored curves suggest a deep, unyielding calm that anchors the turbulent maelstrom on the other side. For the first time in an MB&F creation, Kari Voutilainen has applied his proprietary style of finish onto the ratchet wheels. This technique imparts a serpentine shimmer to the circular surface, catching the light in sigmoid waves. This technique is a closely guarded secret in the Voutilainen workshops, requiring years of experience and special tools to execute.

About the LM Thunderdome engine

The MB&F Legacy Machine Thunderdome is the culmination of four years of development, an unprecedented collaboration between two of the most admired horological minds today, Eric Coudray and Kari Voutilainen. While the technical construction originated with Coudray, it was Voutilainen who translated the mechanism into the aesthetically refined movement that inhabits LM Thunderdome.

Though the latter task may seem straightforward compared to technical development, it actually entails a far greater level of difficulty than is implied. The complex and delicate relationship between the 413 components of the LM Thunderdome engine makes every micro-adjustment an extended exercise in mechanical reconfiguration. With a movement diameter of only 35mm, proportionate design is exponentially emphasised and there is far less margin for error. A bridge that is even one single millimetre too wide, or a pinion moved just a few micrometres to either side, would immediately stand out, glaringly out of place.

Says Voutilainen, “In such a complex project, with so many different considerations, I chose the traditional method of hand-drawing the movement rather than working with computer software. It allowed me to have a much better feel for the proportions and the choices that needed to be made about aesthetics and function.”

Appearing to hover above the dial plate of Legacy Machine Thunderdome is the ‘TriAx’, a highly sophisticated multi-axis rotating escapement that is completely novel even in Eric Coudray’s unmatched oeuvre of similar mechanisms.

Additionally, the last axis of rotation is excentric relative to the other two, such that the final motion of the balance wheel, when viewed in isolation, is most precisely described as an orbital tri-axial rotation.

Existing terminology does not adequately cover the rotating mechanism of LM Thunderdome. The current separation of rotating escapements into tourbillon or karrusel categories does not work here, as Coudray’s creation incorporates key elements of both, such as the split-train energy transmission of the karrusel, and the fixed wheel of the tourbillon. Even so, these elements are configured in ways that are unfamiliar to our conventional definitions of tourbillon and karrusel. Mechanically speaking, Thunderdome stands alone.

Driving this cinematic feat of horology, which weighs close to 1g, is a manual-winding three-barrel movement with 45 hours of power reserve.

More about TriAx: a three-dimensional balance and a rare escapement

For the first time in any micro-mechanical work of horology, a hemispherical balance is used to provide inertia in the regulating organ. This completely innovative custom solution allows for the largest possible balance when combined with a cylindrical hairspring, while still maintaining a relatively compact cage (or compound cages, as the case might be).

Pioneering a three-dimensional balance might be considered by even the most ambitious watchmakers as enough of a challenge, without the extra step of planting it in the middle of a multi-axis rotating mechanism. How does one adjust a balance that takes a different position in all three dimensions every second?

Even state-of-the-art laser measuring instruments were baffled by the continuously shifting balance and its enclosing rotating cages. MB&F furthered the known applications of this laser technology by shifting the beam frequency entirely into the infra-red range (thus avoiding any misreadings caused by the visible range of the beam interacting with the polished components) and developing a system of taking discrete readings at specific intervals over a period of time. This, in addition to the combined experience and skill of Eric Coudray and the MB&F watchmakers, allowed the LM Thunderdome balance to be adjusted with efficiency and precision.

The key to the high-speed rotation of TriAx at the heart of LM Thunderdome is a little-known variant of escapement, first proposed by 19th-century American watchmaker and inventor Albert H. (not Harry) Potter as a tourbillon modification. Instead of driving the escape wheel, via its pinion, around a fixed fourth wheel, he made the escape wheel the fixed wheel, and altered the geometry of the escape lever accordingly. This, he correctly theorised, would allow blindingly fast tourbillon rotational speeds.

In the TriAx mechanism of LM Thunderdome, the Potter escapement is modified yet further. Instead of a fixed escape wheel with externally oriented teeth, co-axial to the balance, Thunderdome uses a fixed escape wheel with inverted teeth, co-planar to the lever fork. Only once has this configuration been seen in modern horology, and only in a single-axis tourbillon, never before in a multi-axis mechanism. There was no rulebook or established precedent, so TriAx created its own.

These are all firsts for MB&F, and more significantly, they are firsts in the horological world.

Because an exceptional movement deserves exceptional levels of finish, Kari Voutilainen consented — for the first time in an MB&F creation — to apply his own proprietary finishing technique on the ratchet wheels. This finish imparts a sheen that appears almost uniformly sandblasted, but reflects direct light in deeply curved sigmoid waves.

“Not even someone with years and years of finishing experience could replicate this finish,” says Voutilainen. “Not without specific training, specific tools and specific techniques.” Needless to say, these specific things will remain unspecified by Voutilainen, save for highly favoured and trusted finishing experts in his workshop.

The rest of the Legacy Machine Thunderdome engine features superlative hand finishing throughout, at the highest level of 19th-century style. Sharp internal angles, unachievable by machines, are bevelled and polished by hand. The softly luminous Geneva waves characteristic of Voutilainen are applied by hand, as are the frosting and engraving on the power-reserve indication.

Surrounding the multi-axis rotating escapement is a guilloché dial plate, which is also created by Kari Voutilainen in Comblémine, his dial factory.