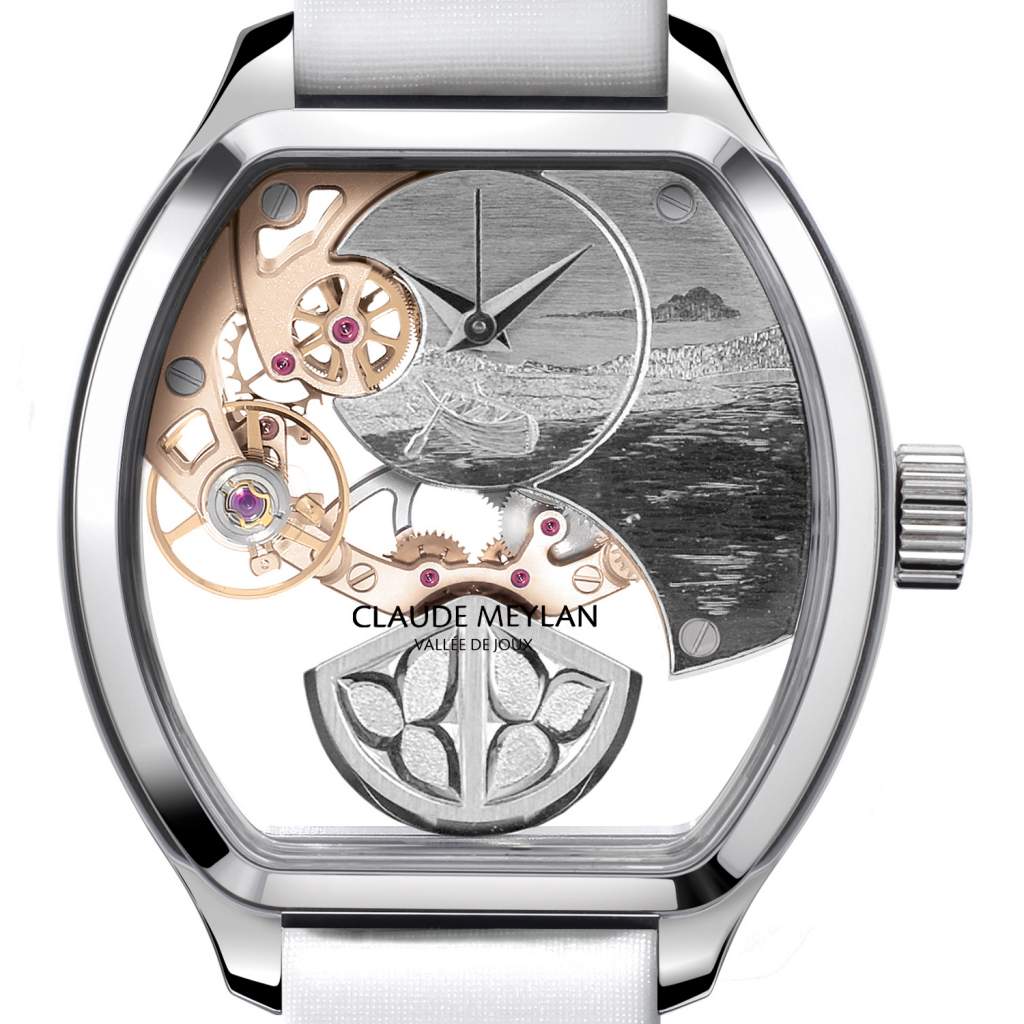 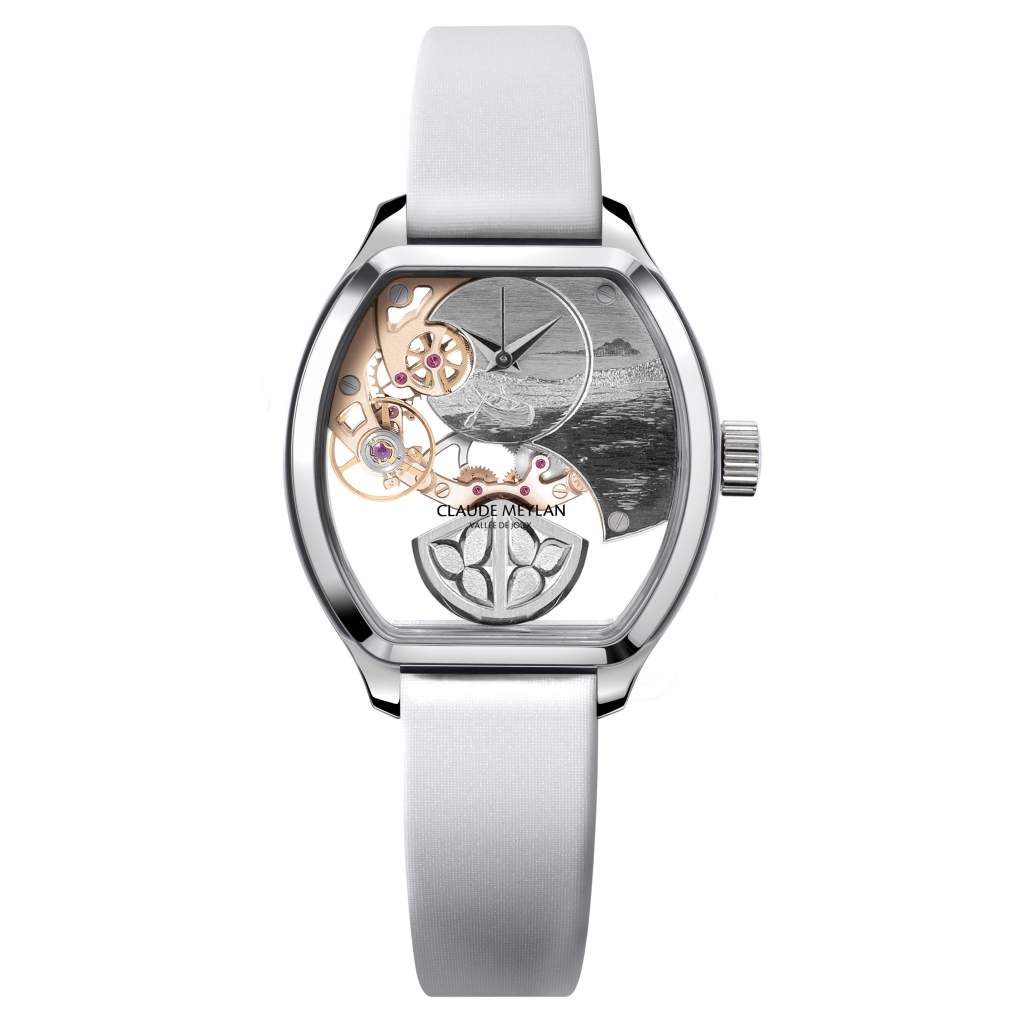 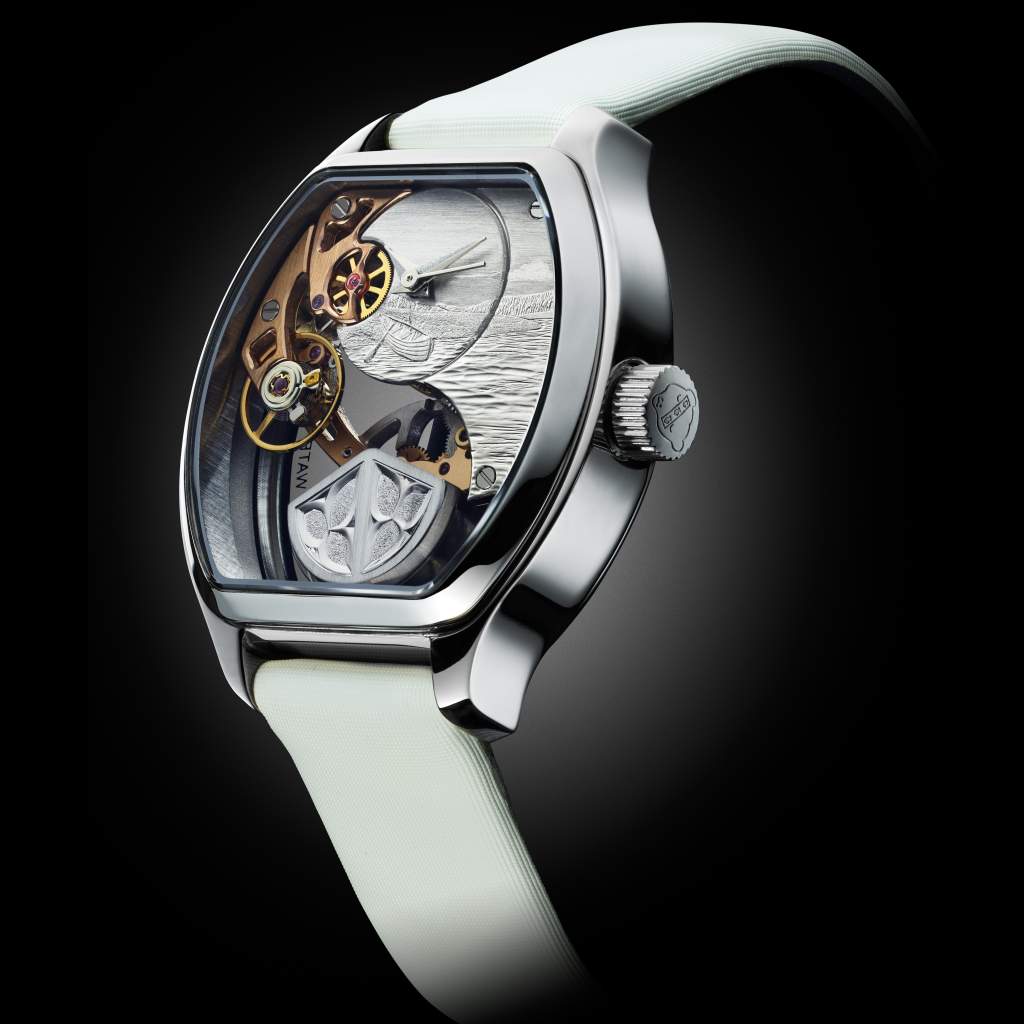 At a watch fair in London, Philippe Narbel – founder and CEO of Manufactor – fell in love with the Tortue Lady movement. He promptly asked Philippe Belais if he could make his own contribution to the timepiece. As it turned out, the two Philippes were in fact neighbors at L’Abbaye, and so they met and realized that they shared many core values, like a passion for their work and the need for freedom to express themselves and be creative.

First, he gave it all some thought, put the project aside, and then re- turned to it and let his imagination run wild while applying his talent.

He considered the timepiece as a whole and found a subject that he held dear. We are, after all, in L’Abbaye, in the famous Vallée de Joux, by the side of a lake that has inspired so many fine creations. An arch from the first abbey dating to 1126 – hence the name – still survives, and that little detail is what gave rise to the engraving on the oscillating mass. This particular sculpture is a strong link to L’Abbaye itself, and to the CLAUDE MEYLAN workshop situated in the town.

And, like a window onto the lake, the dial and the bridge at 3 o’clock merge into a single work, an engraving that is made entirely by hand and combines vigor and nuance to suggest the breeze rippling the water’s surface, the movement of the boat, and Nature’s shimmying vegetation. This work gives a unique and personal perspective on the lake.The many details and subtleties captivate the beholder and fire up the imagination. Philippe Narbel and his Manufactor workshop created this unique timepiece from the water’s edge at a part of the lake known as the sandy point, or “La pointe de sable.”

CLAUDE MEYLAN developed a deeply feminine caliber for the TORTUE LADY in response to the expectations of the company’s female clients.

What they wanted was this:

- Awareness of women’s genuine appreciation of mechanical watches and their preference for automatic movements.

- Feminine touches, such as curves, transparency and lightness.

- Something “happening” at the heart of the timepiece.

True to its philosophy, Claude Meylan offers a unique blend of dependability, accessibility and creativity.

We have built an entirely new automatic movement based on the sturdy ETA 2671: the dial has been moved up to the 12 o’clock position, while the oscillating mass, with its own animation, serves as a counterweight at 6 o’clock.

A gentle and mellifluous curve in the design running from 11 o’clock to 4 o’clock reveals the escapement and the balance wheel, while the bridge at 3 o’lock is integrated into the decorations.