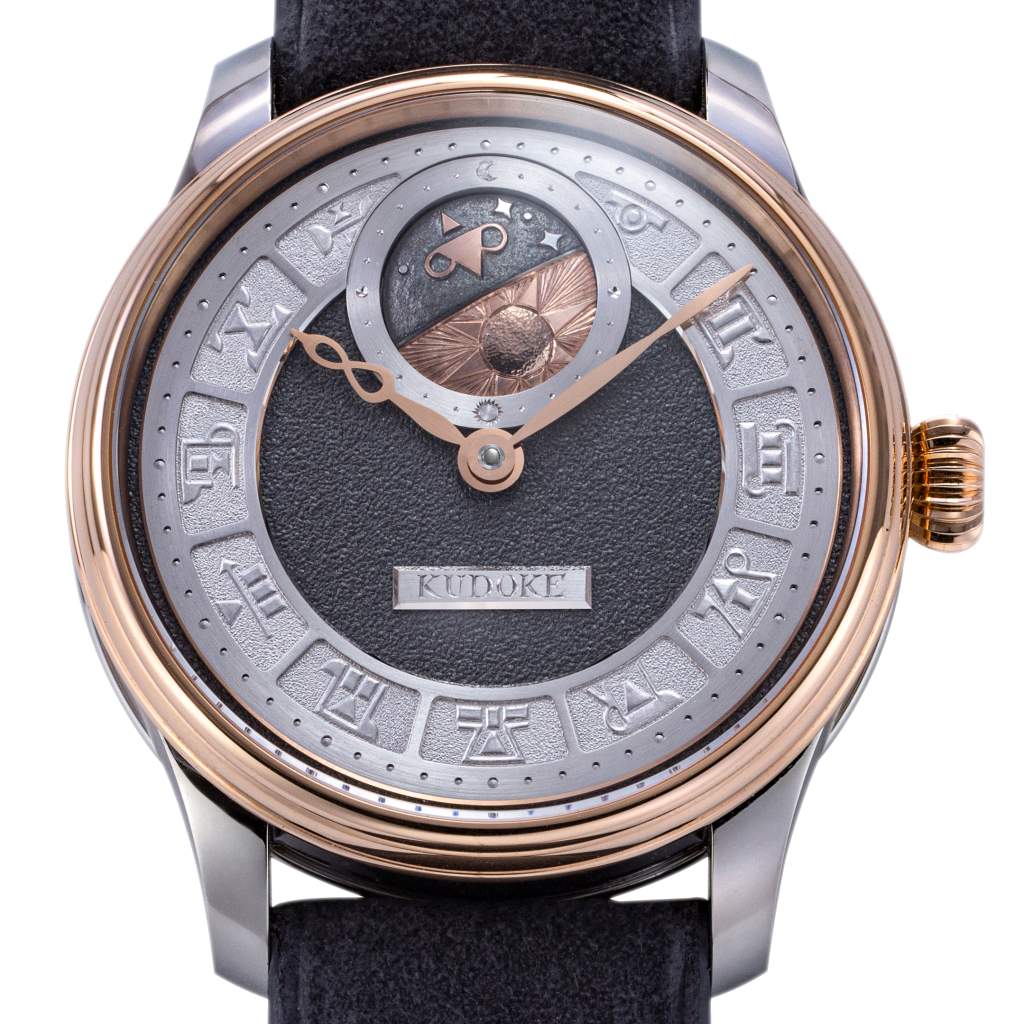 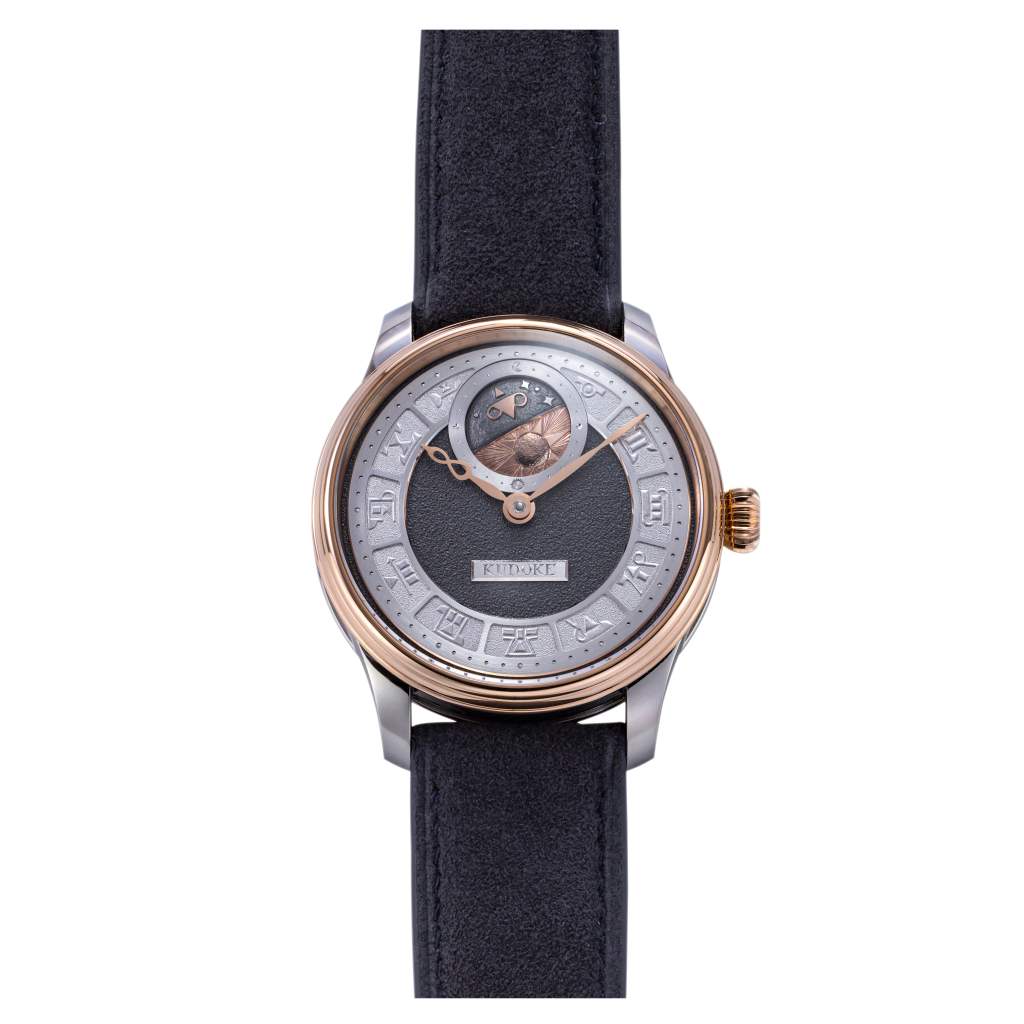 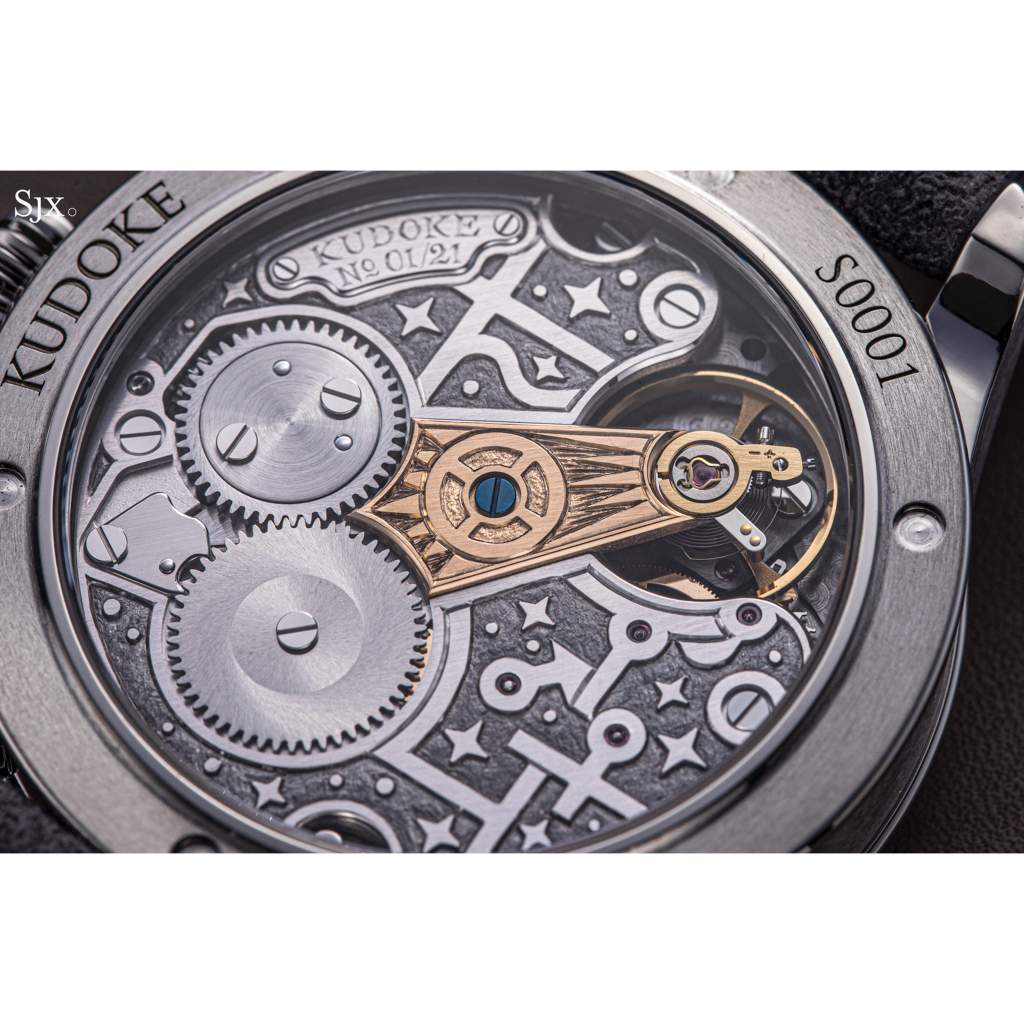 Limited to 21 pieces (and one prototype), the KUDOKE 2 Zodiac is the first watch in the KUDOKE Handwerk collection that is fully engraved on the front and back – entirely hand engraved in fact, with the only machine engraving on the watch being the markings on the rim of the case back.

With its celestial element - the 24-hour-indicator at 12 o’clock - KUDOKE 2 is the perfect base to incorporate a Zodiac theme.

But it is not „only“ about the handcraft, that makes this watch so artistic. The whole concept of this timepiece which has been developed in collaboration with Singaporean watch expert Jiaxian Su (founder of Watches by SJX) and Canadian Illustrator Lee Yuen-Rapati (better known as One Hour Watch), makes it a piece of art.

This project pushes the boundaries of horological typography and is a shining example of collaborative work within the industry across three continents.

The process of the dial design began with a question: Could a set of numerals be combined with the symbols of the zodiac? It was a daunting task simply trying to figure out a system that where the numerals and symbols could be combined cohesively and within the context of a watch: meaning curved base and cap lines as well as a small overall size, which Lee mastered brilliantly.

On the dial side each hour emblem represents a zodiac sign while incorporating the respective Roman numeral. Three, for instance, is represented by Cancer with “III” within, while ten is Aquarius containing a “X”. And “12” takes the form of the sign of Aries replacing the moon on the original day-and-night disc of KUDOKE 2.

The raised chapter ring highlights the emblems, while having a heavily granular centre to contrast with the finer texture of the chapter ring. So the dial is made up of up of four parts, including the applied plate bearing the hand-engraved brand name.

The numerals are hand engraved in relief on the chapter ring, which sits on the dial base that’s been stamped to create an effect that resembles extremely granular frosting. The result is a dial with a multitude of textures – and a lot of hand engraving.

The movement continues the celestial-Art Deco aesthetic – with a hint of vintage comic art – and subtly incorporates symbols representing the planet of the solar system.

Each zodiac sign has its ruling planet, and since the movement essentially controls what we see, it made conceptual sense to have the zodiac symbols on the dial working as domiciles to the movement. The classical ruling planets are Mars (for Aries and Scorpio), Venus (Taurus and Libra), Mercury (Gemini and Virgo) the Moon (Cancer), the Sun (Leo), Jupiter (Sagittarius and Pisces), and Saturn (Capricorn and Aquarius).

Since the Kaliber 1 uses a 3/4 top plate rather than multiple bridges, it presented a wide canvas for placing the ruling bodies. Several features made themselves candidates for decoration such as jewel bearings and screws. Conveniently, the movement had the same number of major wheels as planets for the classical ruling bodies. The two largest visible wheels were assigned to the largest planets with the ratchet wheel being paired with Jupiter and the crown wheel paired with Saturn. The jewel bearings for gear train made perfect hosts for Mercury, Venus, and Mars. The escape wheel was paired with the Moon while the balance wheel and its endstone represented the Sun symbol.  The symbol for Earth is also included around the central blued screw of the balance cock. This made conceptual sense as Earth is a blue planet, and at the centre of astrology.

Like the dial, the movement is hand engraved in relief, and additionally plated in three colours for contrast – rose gold for the balance cock, white rhodium for the raised engraving, and black rhodium for the recessed, grained areas. It is a meticulous task to achieve a multi coloration within a movement bridge with such a high degree of detail as like an artist one has to cover the areas that are not to be plated with a special lacquer quite exactly.

Mechanically it is identical to the movement found in the standard model. It’s hand wound with a 46 hour power reserve, while its architecture is inspired by 18th century English pocket watches, explaining the elongated balance cock.

The limited series comes with a titanium case, not so much because of its physical properties – although its lightness is appealing – but because of its grey tone. The colour of the metal was the ideal fit for the finishes on the dial and movement. 10 pieces of the edition are equipped with two-tone cases, made up of a titanium case middle and case back matched with the bezel and crown in 18k rose gold, which is a perfect complement to the dial.

One final detail worth mentioning is the strap. Given the textures of the dial, it was apparent that Zodiac had to go with a textured strap. Alcantara, the synthetic textile most commonly found in the interiors of cars is similar to suede but extremely hard wearing, and in dark grey it was a perfect match for the dial.