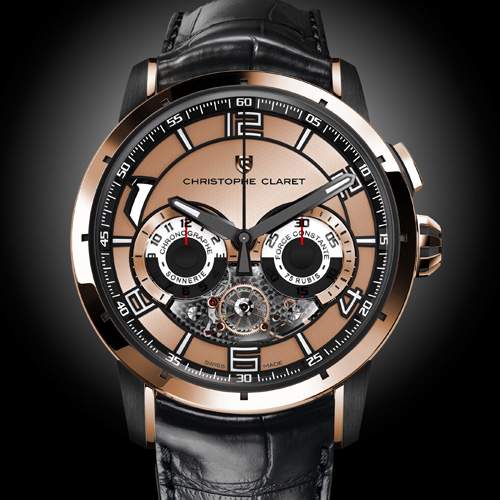 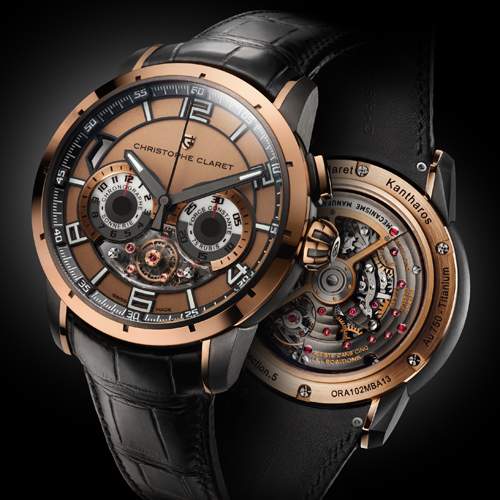 Could it be the determination etched on its face? Or its performance-packed heart? Is it the eye-catching aesthetics? Or its fascinating fully integrated mechanism? Whatever the answer to such questions, Kantharos embodies a stunning blend of haute horlogerie expertise and high-tech precision. This mono-pusher chronograph with striking mechanism and constant force escapement asserts its own identity and reinvents the measurement of timing events.

Kantharos: a name carrying echoes of a bygone era, yet clearly ready to conquer the modern world. Its Greek-sounding origins endow it with instant mythical status. A stellar performer in the equestrian world, Kantharos, son of the renowned Coeur de Lion, is a thoroughbred with an outstanding track record. Kantharos is now destined to show the same energy in making its entrance onto the watchmaking scene. A king among chronographs and a force of nature, Kantharos features a constant-force escapement that ensures supreme precision. The automatic-winding chronograph's cathedral gong audibly chimes with each change of function – a concept invented and developed by Christophe Claret.

Elementary: the starting and stopping of the chronograph is heard before the time is read off on the wrist. Christophe Claret started with a simple premise: athletes launch out of starting blocks when the gun is fired; boxers begin and stop their fights when a gong is struck; horses burst out of the stalls when the starter gives the signal. So it is logical to hear exactly when the chronograph starts and stops timing. Kantharos enriches the world of short-time measurements with an ingenious striking system triggered by each change of mode (start, stop, reset).

The concept is entirely in line with Christophe Claret, which has repeatedly distinguished itself with innovative striking mechanisms featuring cathedral gongs. The latter, the acknowledged king of chimes, is visible at 10 o’clock and equipped with a patented system that avoids the gongs vibrating against each other. The chronograph delivers peerless and reliable performance. Its clutch disk system, inspired by car gearboxes, prevents the hand from jumping when the chronograph starts to enhance precision. This useful, functional and entertaining chronograph plays on the sensorial – acoustic and tactile – interaction between the instrument and its owner.

In addition to this innovative complication, Kantharos is also equipped with a constant-force escapement. Majestically enthroned on the dial side at 6 o’clock, this clever mechanism is a key component that considerably reduces timing variations. The energy delivered to the escapement remains constant from beginning to end of the power reserve. Precision is the overriding goal. The perpetually moving mechanism exercises a hypnotic visual effect, which may be admired beneath a meticulously chamfered sapphire bridge revealing the full extent of the master-watchmaker’s know-how.

This technical perfection is matched by architectural balance: Kantharos leaves nothing to chance. Its layered dial skillfully plays on depth and transparency, accentuating the visual field, while catching and holding light. Designed like an amphitheater in which the actors display their remarkable skills. The titanium and ruby red indicators are enhanced with Super-LumiNova, while the chronograph seconds hand is a vivid red. Despite their strong personality, the numerals and hour-markers are relatively discreet so as not to clutter the dial. With chronograph counters on either side, the constant-force device appears to be at dial level – an impressive structural achievement in itself. The distinctive nature of the counters, inspired by aircraft instrument panels, is further enriched by an original disk display system. One sapphire disk carries the numerals, while a second black and white disk positioned below features a red indicator. Each is rimmed with a graduated step, giving the display a pleasing sense of dimensionality. Every single detail thus contributes to the overall perfection: The color coordination extending from the hands, the jewelling, the time indications and through to the overstitching on the alligator leather strap.

The Kantharos caliber is ingenious in many respects. This self-winding mechanical movement is equipped with the first ever components made from M-15X. This new material has never been before used in the watch industry to make laminated steel and was developed in cooperation with L. Klein SA. It epitomizes the particular attention Christophe Claret devotes to the constant pursuit of innovation – whether in terms of horological complications, machinery or materials. M-15X is a type of steel made using powder metallurgy-based production technology that gives it a homogeneous microstructure and a very fine grain. This material serves to achieve remarkably high-quality mirror-polished finishes.

Housed inside a 45 mm-diameter case in titanium and white gold, the movement was designed, developed and assembled in-house. This extremely complex caliber is not built up layer by layer, as is usually the case, but is fully integrated – a unified approach that enhances finesse, performance and coherent technical and aesthetic appeal. The movement design is a feat in its own right. The platinum rotor boasts increased inertia and the mainspring guarantees a 48-hour power reserve. Clearly visible through the sapphire crystal case back and fitted with 75 jewels – an impressive number that single-handedly symbolizes the complexity of the mechanism – the caliber conceals nothing of its refined finishing. Among its 558 components, the swan-neck regulator spring and oscillating winding rotor feature hand-crafted finishes reflecting the finest haute horlogerie traditions. These include polished internal angles, an extremely demanding technique, and a balance-cock adorned with a brilliant-cut ruby. This wealth of subtle touches offer vivid proof that aesthetic precision pervades even the smallest of components and fully matches the outstanding technical performance of the timepiece. Together, they constitute the inimitable signature touch of the Manufacture Claret.