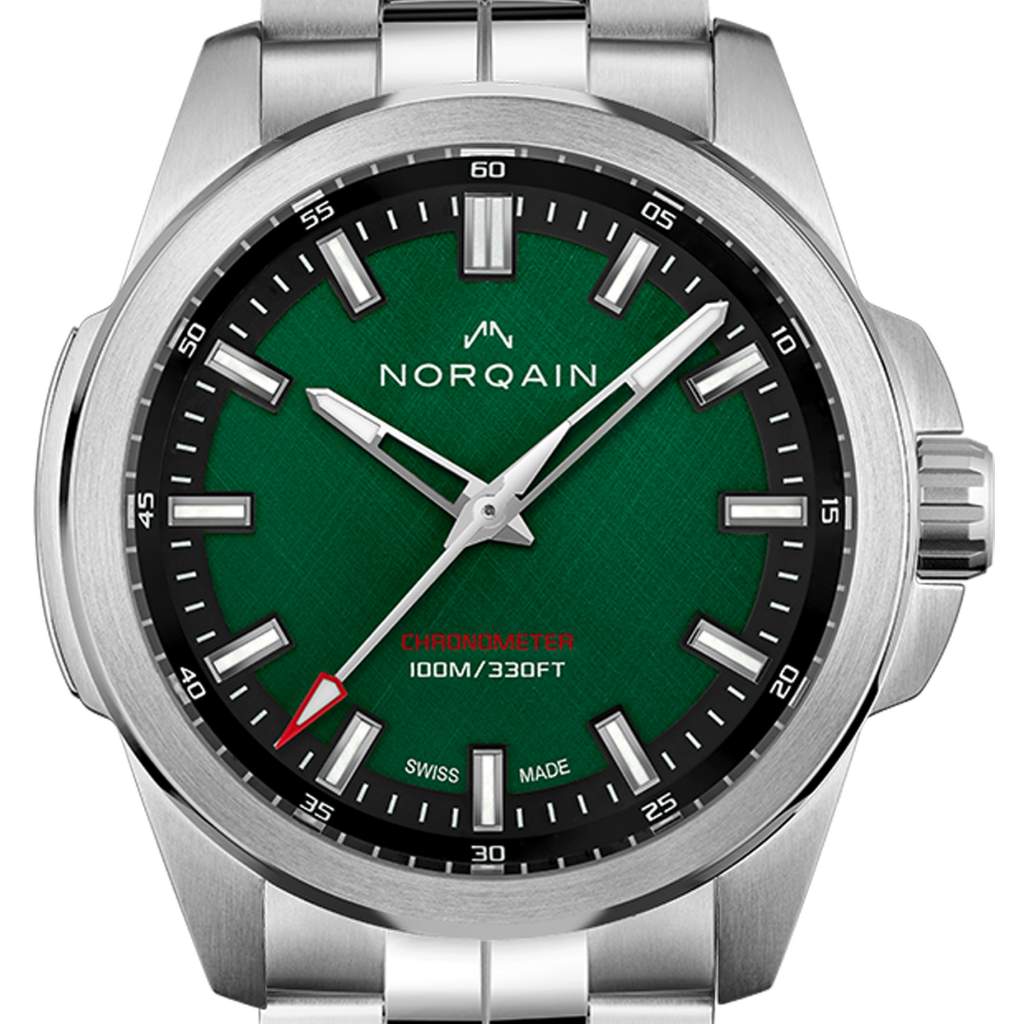 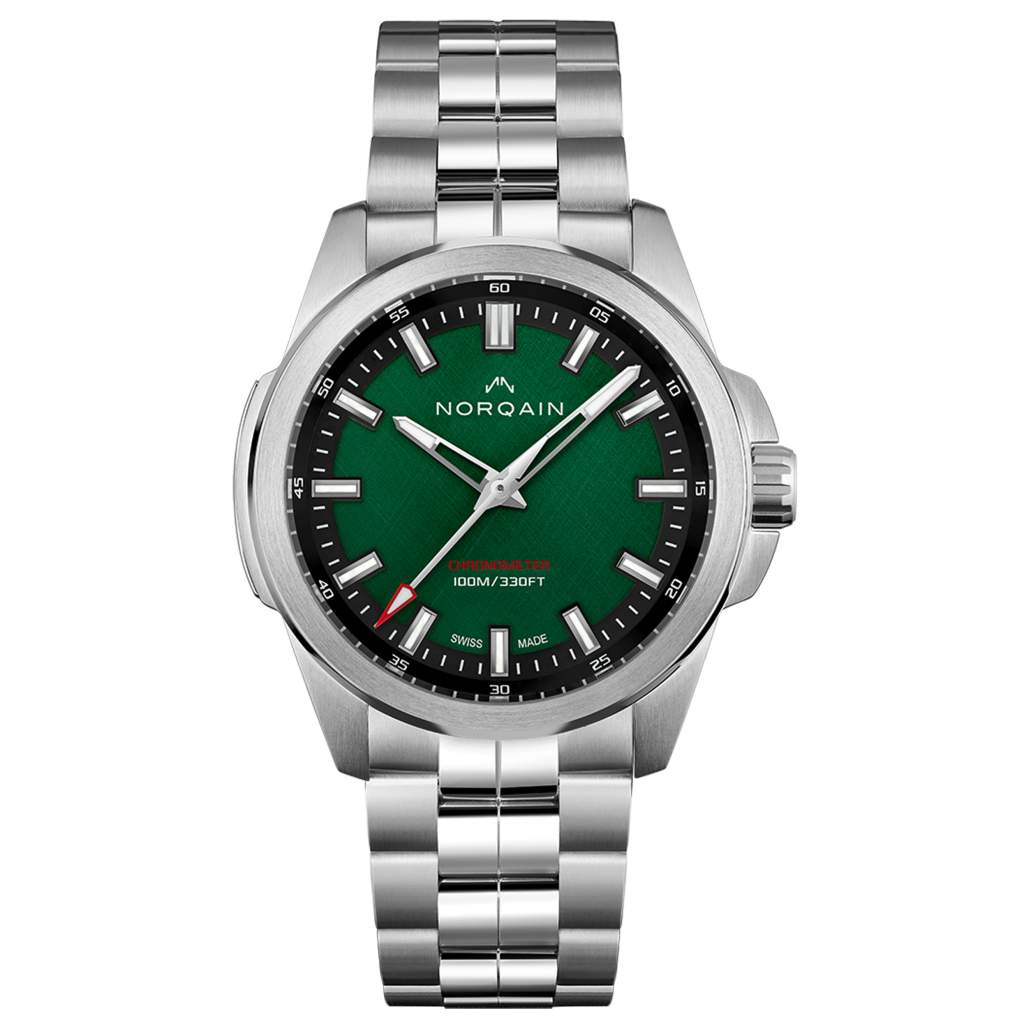 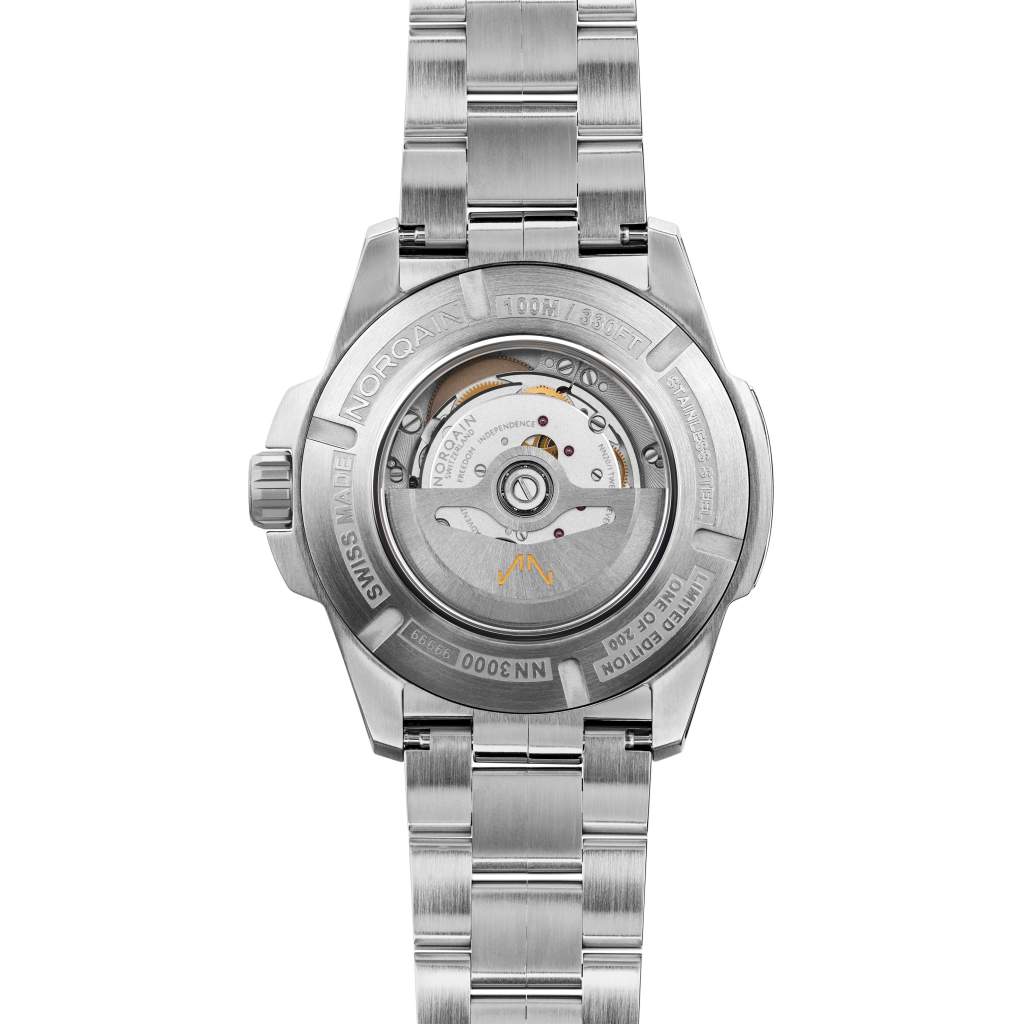 Following the announcement of its noteworthy partnership with mechanical movement manufacturer, Kenissi, NORQAIN has presented the first timepiece fitted with its exclusive Manufacture Calibre. At the heart of the Independence 20 is the three-handed calibre NN20/1, boasting 70-hour power reserve and COSC-certified precision. Not only do the inner mechanics distinguish this sporty timepiece, but its scratched forest green dial and modern elegant design are a perfect celebration of NORQAIN’s conquest of its latest summit. The Independence 20 is limited to just 200 pieces and will be available at authorised NORQAIN retailers as of today.

“It was important to us that the first product to feature one of NORQAIN’s Manufacture Calibres would be an Independence timepiece because our exclusive movements represent a major step toward the brand’s own independence. We are excited to offer customers and fans a timepiece that captures the spirit of this major NORQAIN milestone. The Independence 20 has an unmistakable identity and a striking design that has been created for the individual who embraces what makes them unique and forges their own path,” said NORQAIN CEO Ben Küffer.

A symbol of independence

In addition to the NORQAIN Manufacture Calibre NN20/1 inside, another remarkable feature of the 42mm Independence 20 is its forest green dial. The scratched decoration is unique for each timepiece – no two models look exactly the same. The green colour represents hope, which is a fitting message during the challenges this year has posed for people around the world. The dial features a black inner bezel with a 60-minute indication and hand-applied indexes. The facetted hour and minute hands have a SuperLuminova tip while the seconds hand has a red tip that matches the red “Chronometer” indication on the dial.

Underscoring the Independence 20’s sophistication is its stainless steel case, which features satined, polished and sandblasted finishings. All three finishings decorate the case, an impressive accomplishment that gives the watch an outstanding flair that perfectly captures the DNA of the collection. As with all NORQAIN timepieces, the polished NORQAIN plate is on the left side of the case and is ready for the wearer to personalise it with a life motto, memorable date or important location that tells their own story.

The Independence 20 is presented on either a high-quality stainless steel bracelet with brushed and polished links CHF 2’990.- or integrated black leather strap CHF 2’840.- that ensures the wearer’s comfort.

Visible through the scratch-proof box sapphire glass caseback is the Manufacture Calibre NN20/1 – the exclusive automatic movement that the independent brand introduced earlier this year. Produced in collaboration with movement manufacturer Kenissi, which was founded by watch brand Tudor, the NN20/1 is stylishly decorated with NORQAIN touches such as the golden “double-N” logo – symbolising the Swiss Alps – and the brand’s core values engraved on the bridge as “Adventure – Freedom – Independence.”

The calibre NN20/1 exceeds industry standards and has been issued COSC certification. It boasts an impressive weekend-proof 70-hour power reserve and its sturdy construction features a transversing bridge with two-point fixation that ensures the timekeeping performance will not be hindered by powerful activity.

NORQAIN timepieces equipped with a Manufacture Calibre come with an impressive four-year international warranty – a testament to the high quality and reliability of the movement. When the customer registers to join the NORQAINER Club within one month after their purchase, they will receive an additional year of warranty for a total of five years.

The launch of its Manufacture Calibres in February marked an important accomplishment for the family-owned brand. NN20/1 and NN20/2 helped NORQAIN establish itself as a distinctive brand in the Swiss watch industry and showed that it is taking steps to ensure its long-term independence while offering customers timekeeping quality that exceeds industry standards. The new Independence 20 is a thrilling part of the story as it is the first watch in NORQAIN’s collection to be fitted with one of these high-performance calibres. With it, NORQAIN’s next-level independence has been unlocked, and the brand will continue to tell its story with other exciting product launches featuring its Manufacture Calibres.

Founded in 2018, NORQAIN is a fully independent, family-owned Swiss watch company located in Nidau (Bienne) in the heart of the Swiss watch industry. Driven by the excitement that comes with exploring the road less travelled, NORQAIN has three collections – Adventure, Freedom and Independence – that are exclusively equipped with mechanical automatic movements. In 2020, it introduced two Manufacture Calibres produced in collaboration with movement manufacturer, Kenissi. The company is led by CEO and founder Ben Küffer, his father Marc Küffer, NHL Stanley Cup winner and Swiss hockey legend Mark Streit, and Ted Schneider. NORQAIN is a proud partner of the National Hockey League Players’ Association (NHLPA) and the Official Timekeeper of the Spengler Cup Davos. In July 2020, the brand organised its second NORQAINER Challenge together with On. Available throughout Europe, Japan and the US, NORQAIN has an expansive network of retail partners that includes Bucherer and Kirchhofer in Switzerland, Wempe in Germany, Westime, Tourneau Govberg in the US, L’Oro in Canada, Seddiqi in Dubai, and over 30 points of sale in Japan.