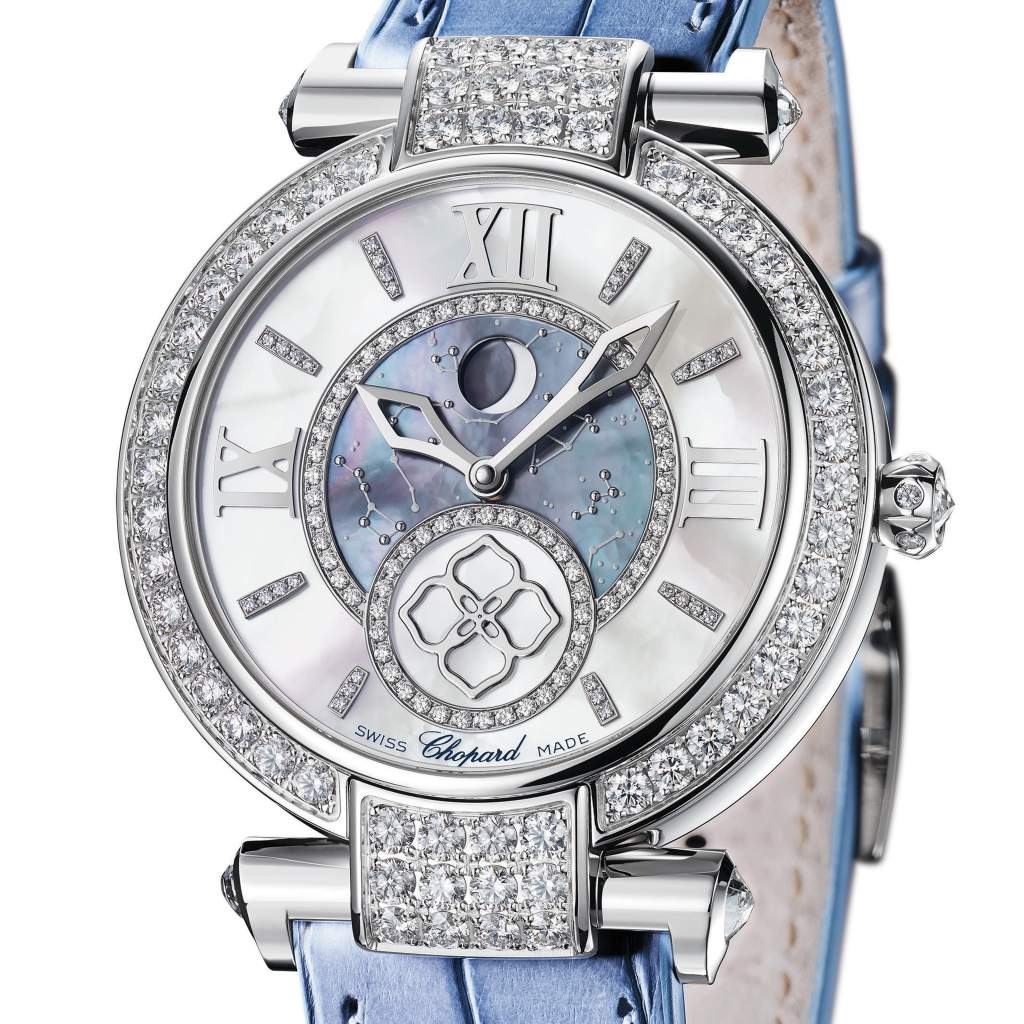 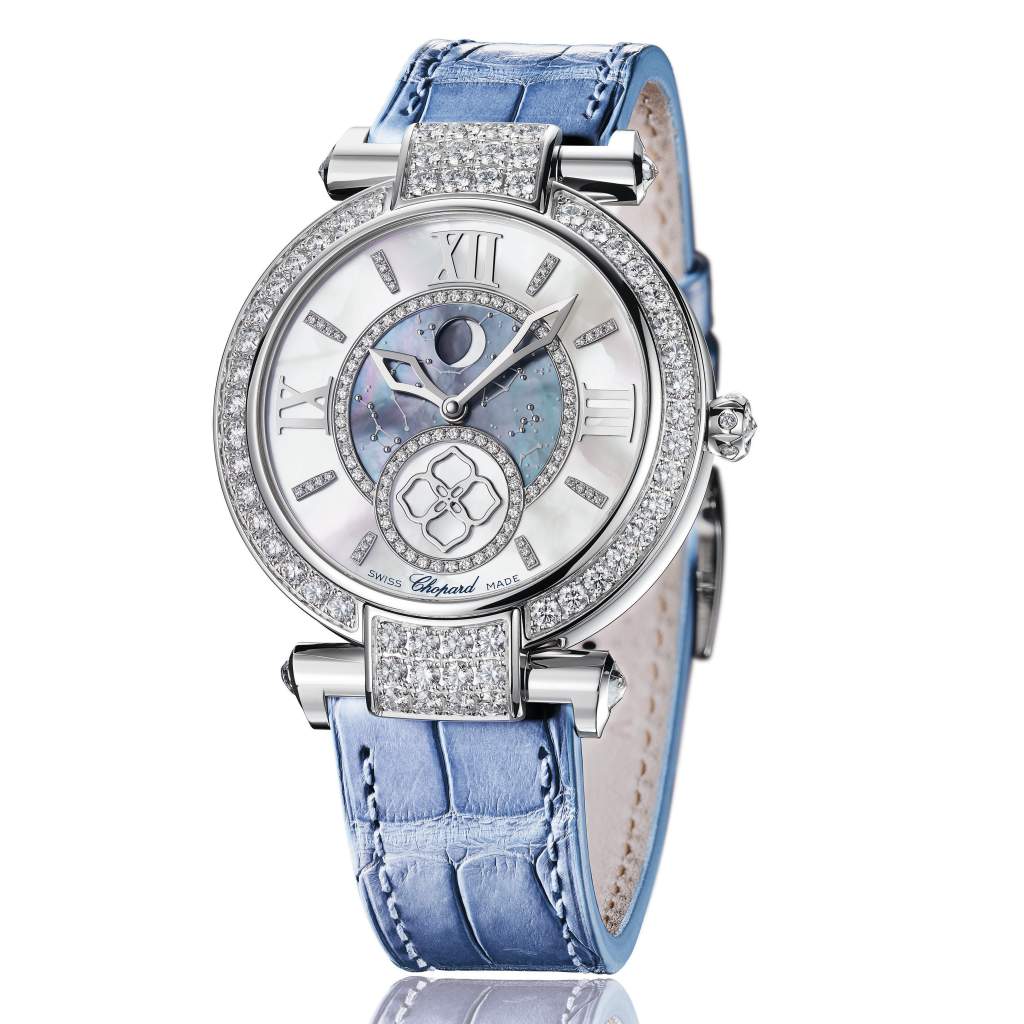 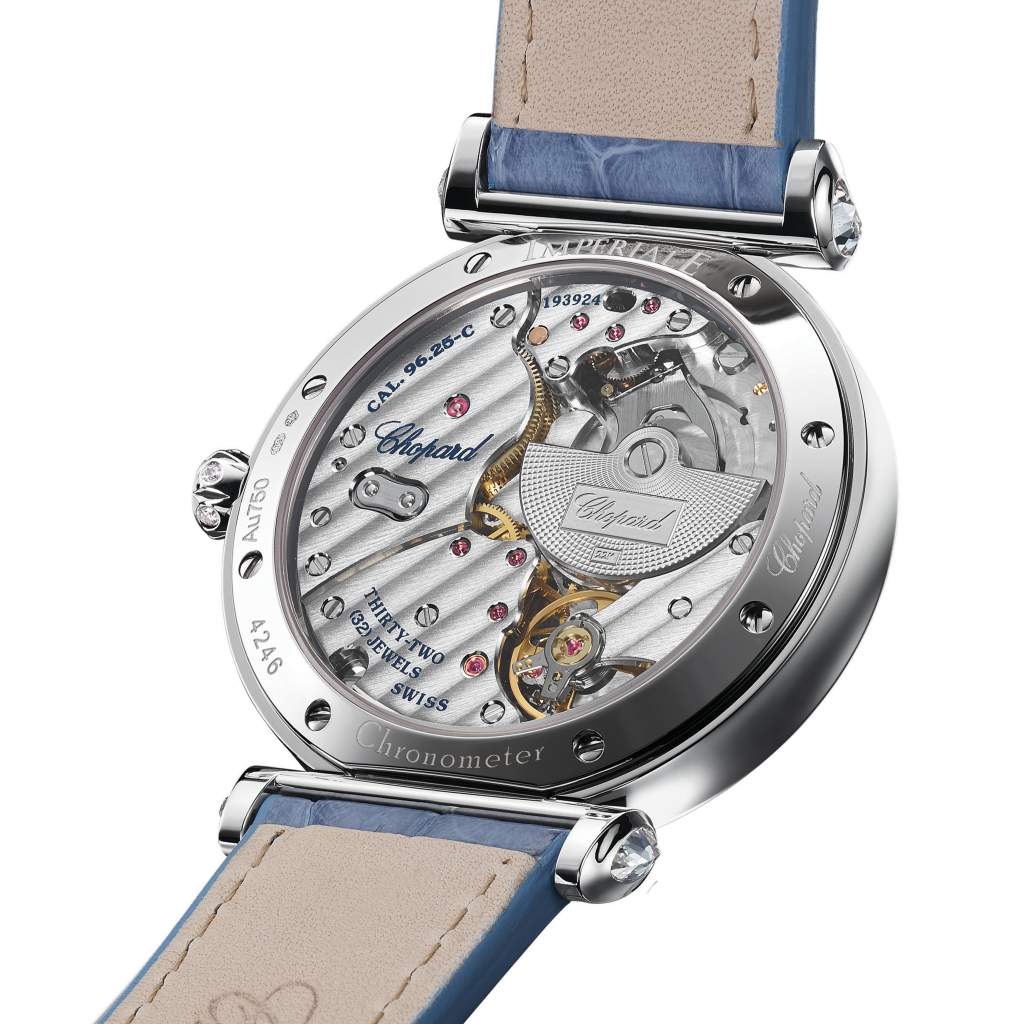 The moon phase holds a place of its own in women’s hearts. Chopard is giving it pride of place within its stellar Imperiale collection. The cycle of the night star and the depiction of the constellations are an invitation to embark on a poetic journey through the shimmering nuances of white and blue mother-of-pearl, lit up by the fire of diamonds. This supreme sophistication extends through to the very heart of this new creation, the self-winding L.U.C 96.25-C movement stemming from the expertise of Chopard Manufacture.

The subtle stylistic echoes of the Roman empire have instilled their majesty into the contemporary elegance of the classic Chopard line aptly named Imperiale. The breadth of the collection reflects the vast scope of its inspiration, encompassing territories ranging from extreme purity to supreme refinement. For the first time, the Imperiale collection welcomes a moon phase, an horological complication whose aesthetic appeal in no way overshadows its technical sophistication. It immediately places this new model within the elite circle of Haute Horlogerie watches.

As beautiful on the inside – with its L.U.C 96.25-C movement – as it is on the outside, the Imperiale Moonphase is an eloquent reminder that watchmaking loves women. Horology is indeed the daughter of astronomy and bases its fundamentals of sequencing time on observing the heavenly pairing of the sun and moon.

Historically, it was also women who first began wearing watches on the wrist. The Imperiale Moonphase model is thus intended for ladies who are moved as much by technical complexity as by aesthetic elegance. The self-winding moon-phase movement driving this new creation and supplying it with an extremely comfortable 65-hour power reserve belongs to a proud lineage of 10 calibres and their 70 variations, all entirely designed, developed and produced in-house. Certified by the most prestigious quality labels, they have propelled Chopard Manufacture – within just 20 years – to the status of a major and entirely legitimate player in the prestigious world of Haute Horlogerie.

The statuesque and sensual collection is graced with a wealth of details reminiscent of an Empire with a monumental heritage. Roman numerals were a natural choice for such an inherently noble creation. The shape of the lugs reflects the tradition of ancient columns, famed for their perfect proportions. The curvaceous outline of the hands is reminiscent of the tapered daggers that sovereigns used in combat. Another weapon of seduction lies in the small seconds at 6 o’clock, graced with interlacing arabesque motifs forming the famous Imperiale pattern, appearing here arrayed in textured mother-of-pearl.

The opulence of the dial is an open invitation to embark on a celestial journey in which the gaze is irresistibly drawn to the silver-toned constellations standing out against a blue textured mother-of-pearl disc. At 12 o’clock, the moon disc covered with white and blue textured mother-of-pearl reproduces the cycle of the night star – new moon, first quarter, full moon and last quarter. A ring of diamonds forms a radiant halo around this sky that harbours our destiny, framed by Roman numerals and diamond-set hour-markers against a white mother-of-pearl background.

The eminently refined design, the exquisite delicacy of the shimmering mother-of-pearl, the choice of softly powdery colours extending onto the lavender blue alligator leather strap, the presence of diamonds – on the bezel and lug covers – creating an inimitable luminous sparkle, along with the ideal 36 mm case diameter, all combine to make the Imperiale Moonphase an alluring timepiece radiating an aura of dainty femininity.