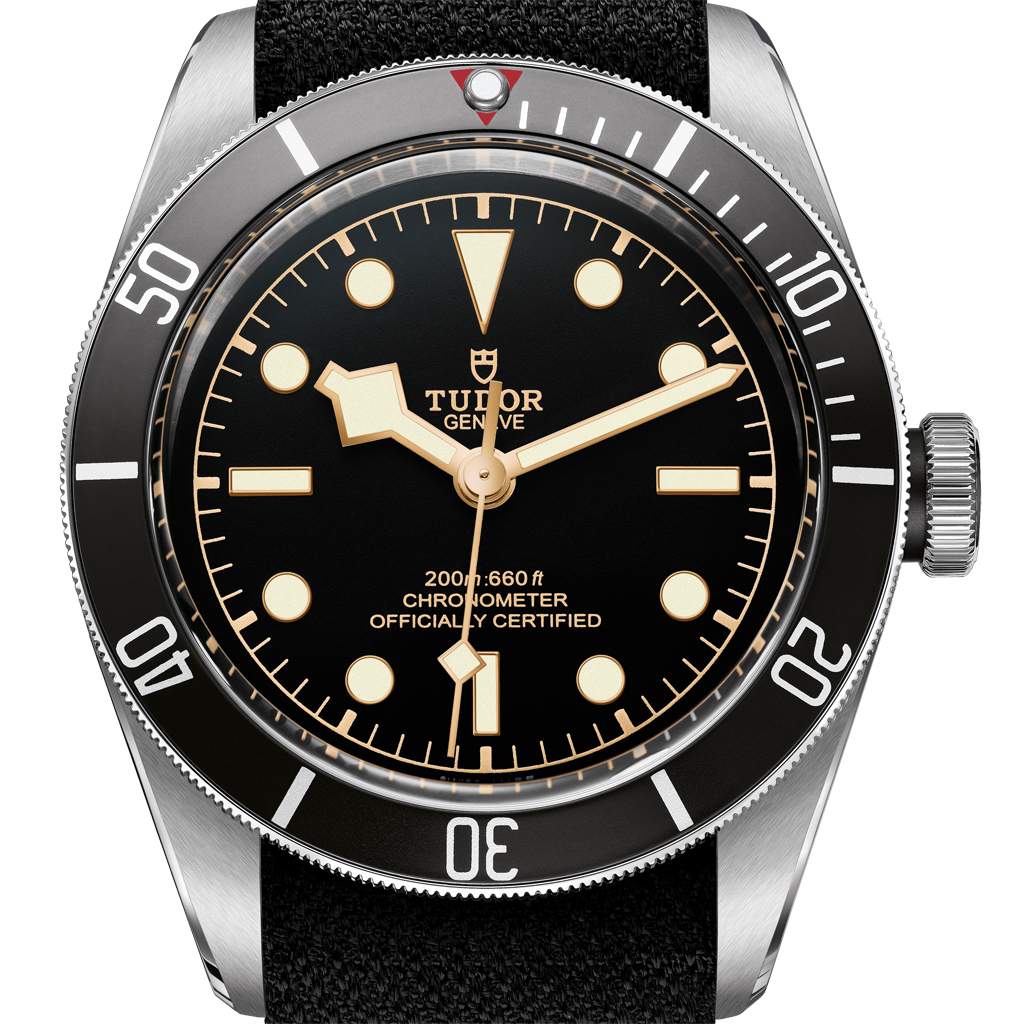 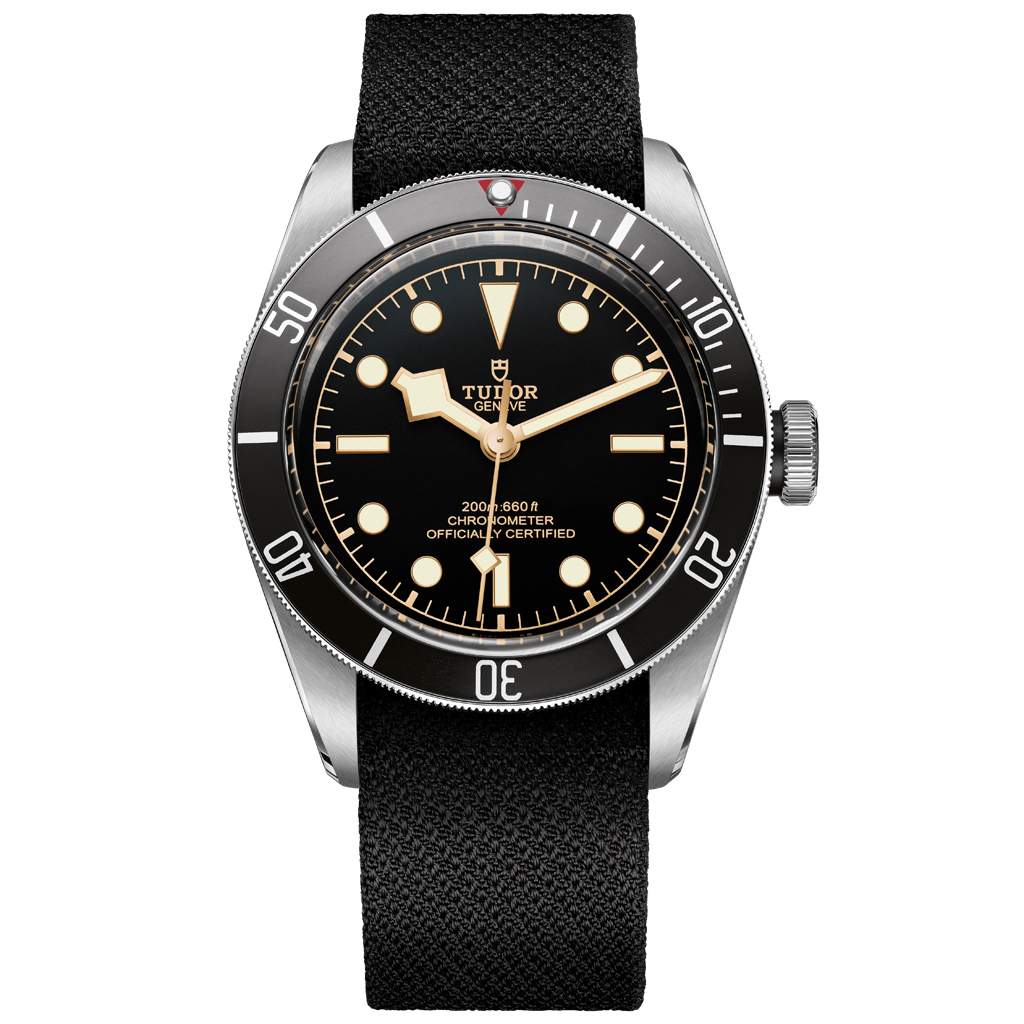 The Heritage Black Bay, presented for the  rst time in 2012 and honoured by the jury of the Grand Prix d’Horlogerie in Geneva the following year, has been updated for 2016 with a mechanical movement developed, manufactured and assembled in-house by TUDOR. One of the brand’s truly iconic models, it celebrates 60 years of diving watches with extraordinary heritage.

The characteristic elements of the Heritage Black Bay’s personality have been drawn from TUDOR’s history. It inherits the general lines, as well as the domed dial and crystal from the first TUDOR div- ing watches. It features the particularly prominent
winding crown from the famous 7924 reference of 1958, known as the Big Crown. It borrows the charac- teristic angular hands, known as snowflake, from the watches delivered in large quantities to the French National Navy in the 1970s.

TUDOR has also reworked the steel bracelet which comes with this model, taking inspiration from the brand’s riveted bracelets made in the 50s and 60s. These were famous for having rivet heads for attaching the links in evidence on the side of the bracelet, as well as a stepped construction. These two aesthetic details have now been integrated into the bracelet of the Heritage Black Bay model, which bene ts at the same time from modern manu- facturing methods with solid links. Also available with an aged leather strap and folding clasp, the Heritage Black Bay model is supplied in both cases with an extra strap in matching fabric: black or bur- gundy for the version with the burgundy bezel, blue for the version with the blue bezel and black for the version with the black bezel and red triangle. Made in the Jacquard technique according to traditional methods by a hundred-year-old family business from the St-Etienne region of France, these straps are a signature feature of TUDOR’s Heritage line.

The Heritage Black Bay model is available in three versions, each with its own personality. With its burgundy bezel, black dial, rose-gold hands and markers and cream coloured luminescent coating, the original TUDOR Heritage Black Bay has the so  and warm patina of an antique watch. Radically dif- ferent and rightly nicknamed “Midnight Blue” by a cionados of the brand, the TUDOR Heritage Black Bay with its blue bezel displays the ice-cold face and sharp contrasts which lend to the watch the look of a professional technical instrument. Of the three, the TUDOR Heritage Black Bay “Black” version best captures the pioneer spirit of the  rst TUDOR diving watches. A notable new decorative detail is the fam- ous red triangle on the unidirectional bezel, taken from the TUDOR models of the 1950s.

The history of the TUDOR divers’ watch dates back to 1954 and the launch of reference 7922. The  rst in a long line of ergonomic, legible, accurate and robust divers’ watches, it perfectly embodies the approach formulated by the American architect Louis Sullivan, according to whom the form of an object must follow its function. Furthermore, it laid down the aesthet- ic and technical foundations of an ideal divers’ watch, those of an understated, functional and re- liable tool. The sixty years that followed the launch of the original 7922 saw the constant improvement of the TUDOR divers’ watch and each model gained unanimous acclaim from professionals in the  eld, including some of the greatest military navies in the world.

A key characteristic of the TUDOR Heritage line is the unique creative process that began in 2010 with the presentation of the TUDOR Heritage Chrono model, a free interpretation of the brand’s  rst chronograph dating from 1970. Since then, some of the most im- portant references in the history of TUDOR have been reworked within the Heritage line. Far from simply being an identical re-release of a classic, the models in this line bring together the past, present and fu- ture, with the aesthetic codes that contributed to the reputation of historic models instilled into contem- porary timepieces. The Heritage Black Bay models are part of an approach in which more than 60 years of TUDOR divers’ watches are condensed.