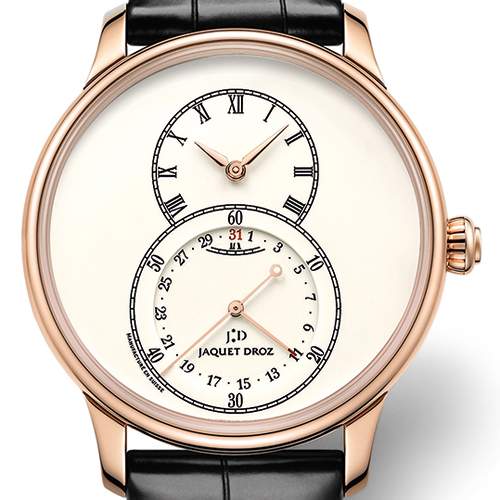 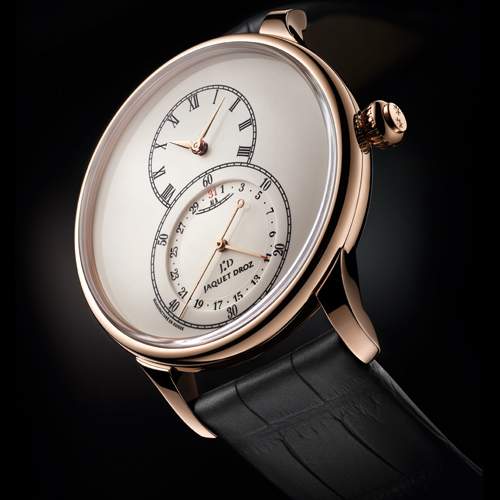 Jaquet Droz has written a new chapter in the story of the Grande Seconde by incorporating a silicon balance spring in the escapement of its movement and rethinking its aesthetic aspect.

The Grande Seconde Quantième, launched in 2011 and inspired by one of the brand's legendary models, reveals a new face and movement this year, reenergizing the conventions upheld by Jaquet Droz and reaffirming its excellence as a watchmaker.

For the first time, major changes have been made to the movement with the addition of a silicon balance spring and inversed horns on the pallets fork. Silicon is a highly flexible material that only a small number of watchmaking brands have mastered how to use.  It can withstand shock and variations in temperature and pressure, and its properties allow it to remain unaffected by magnetic fields, maintaining perfect stability over time.

As with all its movements, Jaquet Droz plays with a range of fine finishing techniques: the plates are circular-grained above and below, the wheels are chamfered, shaped and circular-grained, the steel parts are chamfered and softened, and there are patterns of straight lines and hand-polished angles. All these features compose a unique aesthetic signature, visible through the watch's transparent case-back. For the launch of the new Grande Seconde Quantième Ivory Enamel, the movement is further embellished with fanned Côtes de Genève decoration, which reinforces the brand's identity.

Such modernity, however, is executed with state of the art perfection. The enlarged bridges and the finishes that bring together tones of gray and black give this model a more contemporary feel, all the while integrating perfectly with the brand's decorative signature.

It has been double enameled using the historic Grand Feu enamel technique, peculiar to Jaquet Droz.  This gives a lower subdial of increased depth that accentuates the beautiful balance between the two subdials as they describe a figure eight, the brand's lucky number.

By focusing on changes of a technical and aesthetic nature, Jaquet Droz has again expressed its watchmaking philosophy - the prioritizing of evolution over revolution, while in no way compromising its values of high standards and excellence in terms of both mechanics and ornament