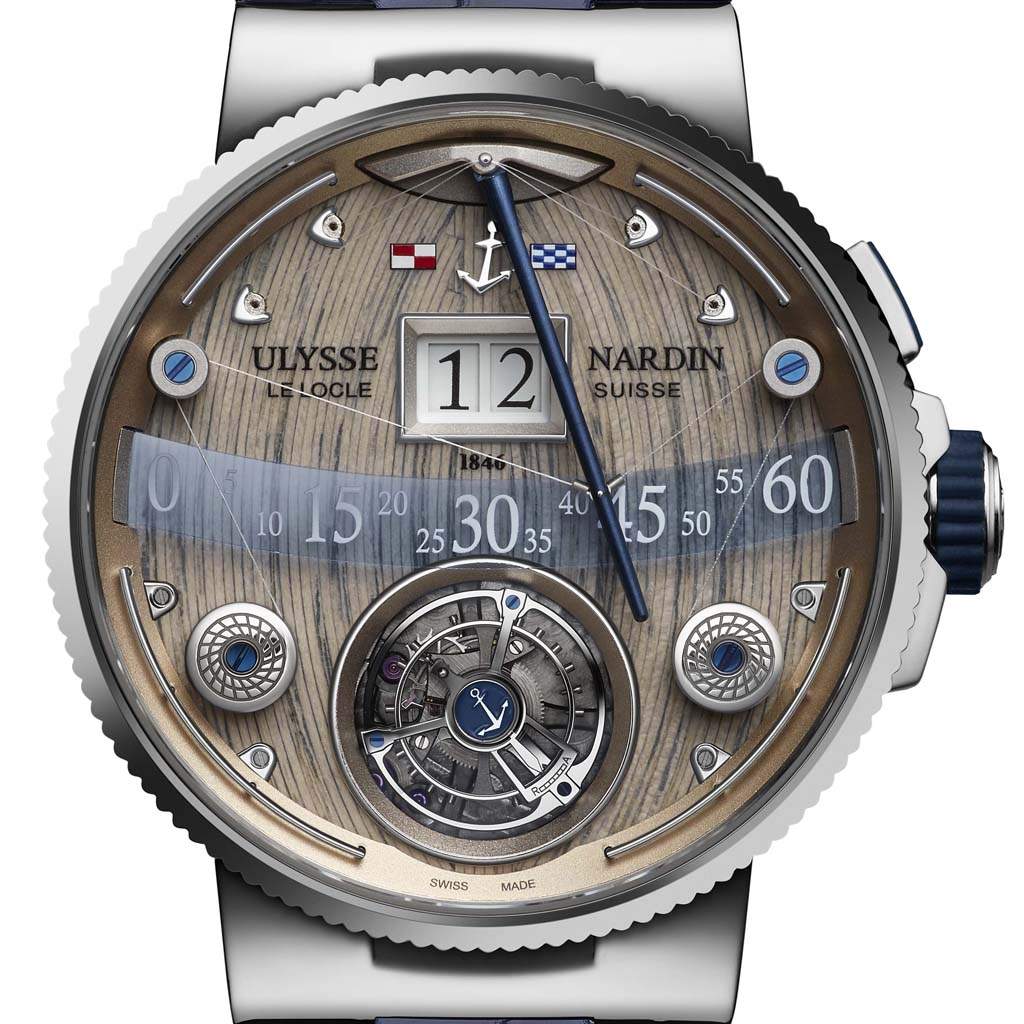 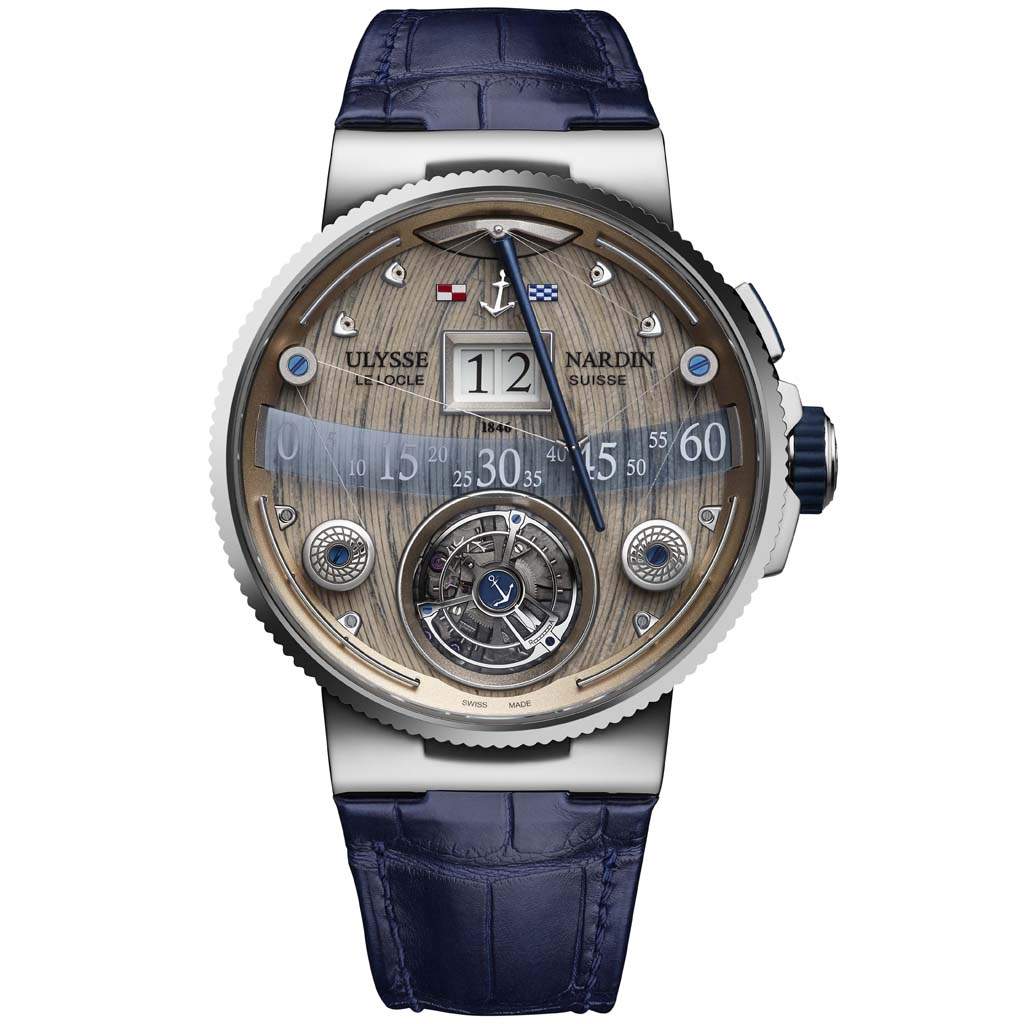 Welcome aboard ! Cutting edge technology and innovative mechanisms are all aboard this high-precision craft decked out in a nautical-inspired design. On the dial, hand-crafted wood marquetry evokes a ship’s deck, while the time display is original and creative: a boom pulled by super-strong nanowires indicates the minutes, while the hours are displayed on two concentric disks. The patented device, which is regu- lated by a second barrel, also incorporates a majestic tourbillon. Undeniably exclusive, this timepiece from the Marine Chronometer collection is produced in 18 white gold pieces.

Ulysse Nardin is in its element when venturing on the high seas, as evidenced by this latest creation. In the inno- vative Grand Deck Marine Tourbillon model, the retrograde minutes display takes the form of a boom. The tech- nology is visually fascinating, and as complex as it is accomplished. Linked to a 60-second flying tourbillon, this patented system is drawn by a super-strong hi-tech fiber that is thinner than a human hair. Impressive all-round, the timepiece showcases breakthrough technology in the unmistakable nautical-themed design of the Marine Chronometer family, of which it displays the legendary traits. The Manufacture, as a pioneer in marine chronome- ters, has a long and distinguished history of producing high-precision seafaring instruments that have helped conquer the oceans since the 19th century. This collection reinvents these tried-and-tested attributes for the modern era. Centuries of expertise and a tireless spirit of innovation have produced the Grand Deck Marine Tour- billon model, a watch worthy of the high seas.

In a proud nod to its maritime roots, the Grand Deck Marine Tourbillon model incorporates the elements of a ship’s deck to display the time in a creative and original manner. The minutes hand is replaced by a boom - the horizontal spar used to angle the head sail. Working like the halyard cord that is used to hoist the sails of a ship, a wire pulls the boom across a graduated arc. The boom jumps back once an hour, its speed regulated by a pur- pose-designed retrograde mechanism. The mesmerizing leap takes 3 to 4 seconds and can be viewed through the case back. The boom is pulled by a nanowire that measures a mere 0.0357 mm in diameter and is capable of withstanding traction of 1.41 kg without stretching. The nanowire is made of polyethylene Dyneema® fiber, a ma- terial that is used in ship’s rigging and is many times stronger than steel. In a first for watchmaking, the transmis- sion system loops the wires through a rigging screw: two strands are visible, and a third strand fastens the turn- buckle. The patented system, which is visible on the dial, is exclusive to Ulysse Nardin. Working like the winches that hoist the sails on deck, four ‘pulleys’ use a drive gear, a spiral tensioning spring and two lock pins. The jump- ing hour is driven by two large concentric disks that turn in real time, and is displayed through a double aperture. A corrector positioned at 2 o’clock can be used to set the time quickly.

Wind in its sails.

The Manufacture’s Caliber UN-630, a 60-second flying tourbillon with manual-winding movement, contains 469 components and oscillates at a frequency of 3 Hz. Despite the considerable power requirements of the boom dis- play, the movement offers optimal precision and a generous power reserve of over 48 hours. A first barrel is de- voted to the time-telling mechanism; a second barrel supplies power to the complication, i.e. to the display of hours and minutes. The latter device is regulated by a specific escapement that collects information from the time- telling mechanism. The double-barrel design (one for the movement and another for the display) prevents the complication from interfering with the workings of the watch. To the rear of the movement, the leading and unload- ing of the balance spring can be viewed through the skeletonized barrels, a feature that is both functional and fascinating. When the watch is wound, the spring winds up into the center of the barrel. Conversely, when the spring is spent it unwinds out towards the edge of the barrel.

This compact example of mechanical ingenuity is housed in a white-gold case measuring 44 mm in diameter and water-resistant to 100 meters. The dial of the Grand Deck Marine Tourbillon conjures a ship’s aesthetic and tech- nical finesse. The fluted bezel is complimented by a screw-down crown with blue rubber molding. Hand-crafted marquetry evokes the sun-soaked teak of a ship's bridge. The blued-aluminum boom sweeps across a translu- cent arc of blue spinel that extends from 3 o’clock to 9 o’clock. The boom is drawn by a wire connected to four pulleys secured with blued star-shaped screws, which are echoed by the tourbillon decorated with the Ulysse Nardin anchor. In a final flourish, border detailing and ornamental wires that adorn the top of the dial offer further subtle references to nautical design. In the signature of the Marine Chronometer collection, the Ulysse Nardin logo, placed between two floating maritime symbols that correspond to the letters U and N, echoes the design of the ship’s chronometers that were historically produced by the Manufacture.

This timepiece is exclusive by nature, available in a limited edition of 18 pieces on an alligator strap with a white- gold folding buckle.