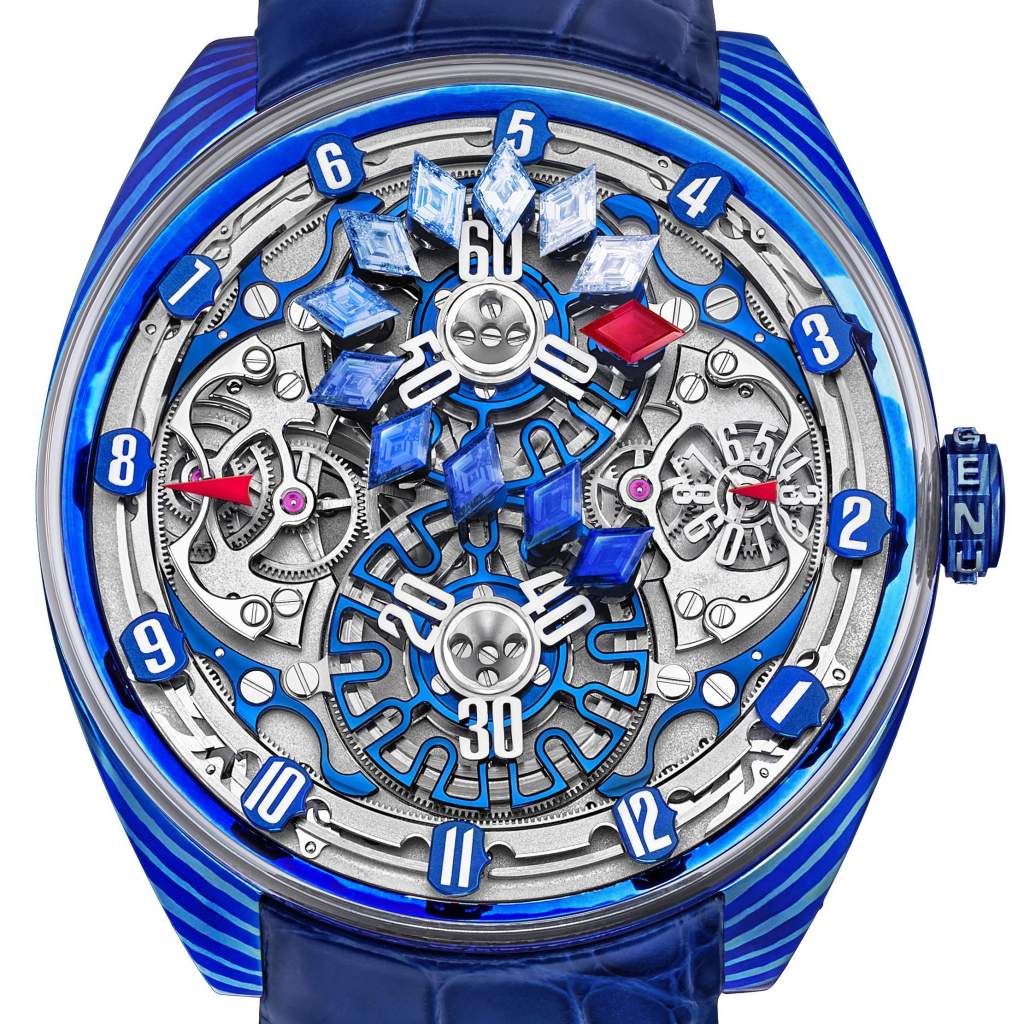 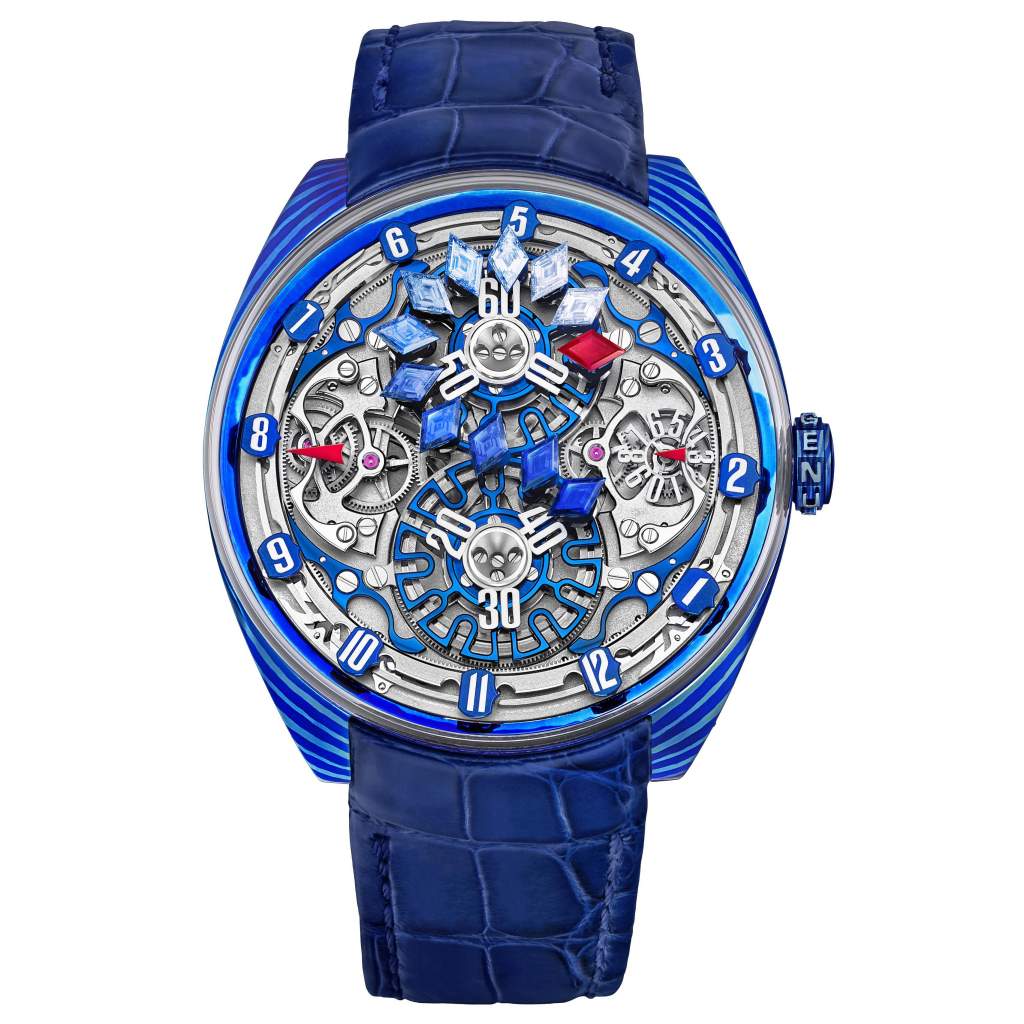 After introducing a new way of telling time in 2019, without hands and free of conventions, GENUS opens a new chapter in 2020 by exploring and bringing together two very different arts, each requiring rare, demanding and subtle savoir faire:

The invisibly set gemstones move freely, with the ruby leading element indicating the tens-of-minutes. A fresh interpretation of juxtaposed jewels that is contemporary, elegant, understated – and fully integrated into the operation of an 18K gold caliber, manufactured to the highest finishing standards.

Upon request, the purchaser may determine the depth and intensity of the blue hues for the timepiece, as well as choose the color of the stones set on the moving elements of the display complication.

After winning the coveted Prix de l'Exception Mécanique (Mechanical Exception Prize) at the most recent Grand Prix d'Horlogerie de Genève (GPHG 2019) for its unique complication of a hands-free display – the object of two patents – together with its 18K gold caliber, GENUS and its co-founders, Sébastien Billières and Catherine Henry, explore two new universes in 2020, further augmenting the mechanical prowess on show.

The world of metal artwork. And not just any metal, as this is Damascene Titanium, the combination of a very rare material in watchmaking with ancestral savoir faire – to offer a new, surprising, vibrant blue that reveals material’s particular structure.

Damask forging, known as damassage de corroyage in France, where it listed in the Inventory of French Intangible Cultural Heritage, is a rare and subtle art. It is also a demanding craft reserved for the best metalsmiths. Indeed, titanium is three times harder than steel, and requires much higher temperatures, between 1200 and 1400 degrees Celsius, to be forged. It involves savoir faire similar to that of Mokume Gane (Mokume-gane?) in Japan, where it has been used to make, inter alia, sword guards since the beginning of the 17th century.

By overlaying different titanium alloys, each characterized by a particular hue and reaction to heat, GENUS achieves a richer, deeper color effect. The color rendering is then enhanced in a final heat treatment stage to determine the overall tone of the metal block and its subtle hue variations.

Each part of the case is cut at a precise angle and reveals the forged layering of the metal. Each timepiece is original and visually unique.

A distinctive gemstone setting that magnifies the movement

At the core of the GNS1.2 TD, the same heart, the same singular brain as in the GNS1.2 WG: an in-house movement with 406 components that was honored with the Prix de l'Exception Mécanique (Mechanical Exception Prize) at the most recent Grand Prix d'Horlogerie de Genève (GPHG 2019). Made of 18K gold and the object of two patents for the display complications, the caliber ensures precision. In recent months, GENUS has continued its research to further improve legibility, resulting in a new sapphire crystal that eliminates the ridge around the circumference, thus reducing possible visual distortions of the indices.

The fruit of Sébastien Billières’ engineering expertise and Catherine Henry’s aesthetic sensibility, the idea of invisible gemstone setting on the display complication offers a fresh take on juxtaposed jewels that is contemporary, elegant, understated. Discreet and subtle, it is perfectly wearable day to night. Visually playful and intriguing in its simplicity, the invisible setting of the stones on the genera – the little floating elements that indicate the tens-of-minutes – required a particularly complex design and development process. Each stone is cut in the shape of a lozenge and the slightest ray of light makes them all stand out – and leaves one wondering if they are held in place by magic. Adjusting the stones to maintain the fluid movement of the free elements is a long, meticulous process requiring utmost precision. Perfect mastery of contrast and complementarity in styles: avant-garde on one side, classic on the other with a view of the movement, reminiscent of the days of pocket watches but now in a modern, refined and exceptional case..

The first of the genera is a ruby of the most intense color, magnifying the spectacle of the time display complication in movement. It is trailed by 11 sapphires having a refined blue gradient. Each stone is of the highest quality with loupe clean purity, untreated and unheated, its color carefully selected for seamless transitions throughout the chain. The weight of the 12 stones is approximately 1.68 ct. and has virtually no impact on the movement’s power reserve of more than 50 hours.

To guarantee authenticity over the lifetime of the watch, even if ownership should change several times over the years, GENUS has joined forces with the Swiss association Arianee Project to provide each of its timepieces with a unique, forgery-proof digital passport based on blockchain technology. In short, a new communication channel – permanent, secure, and anonymous – between the brand and the owner of the timepiece.