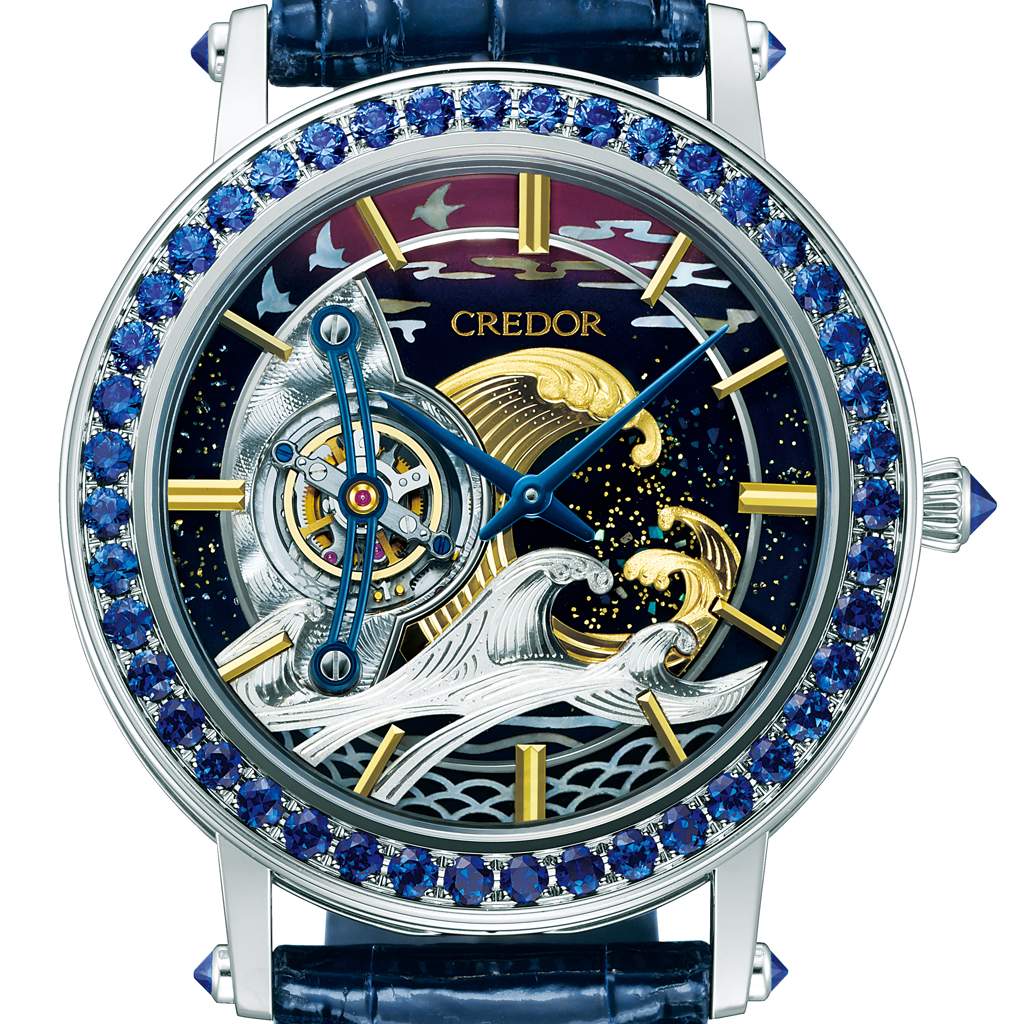 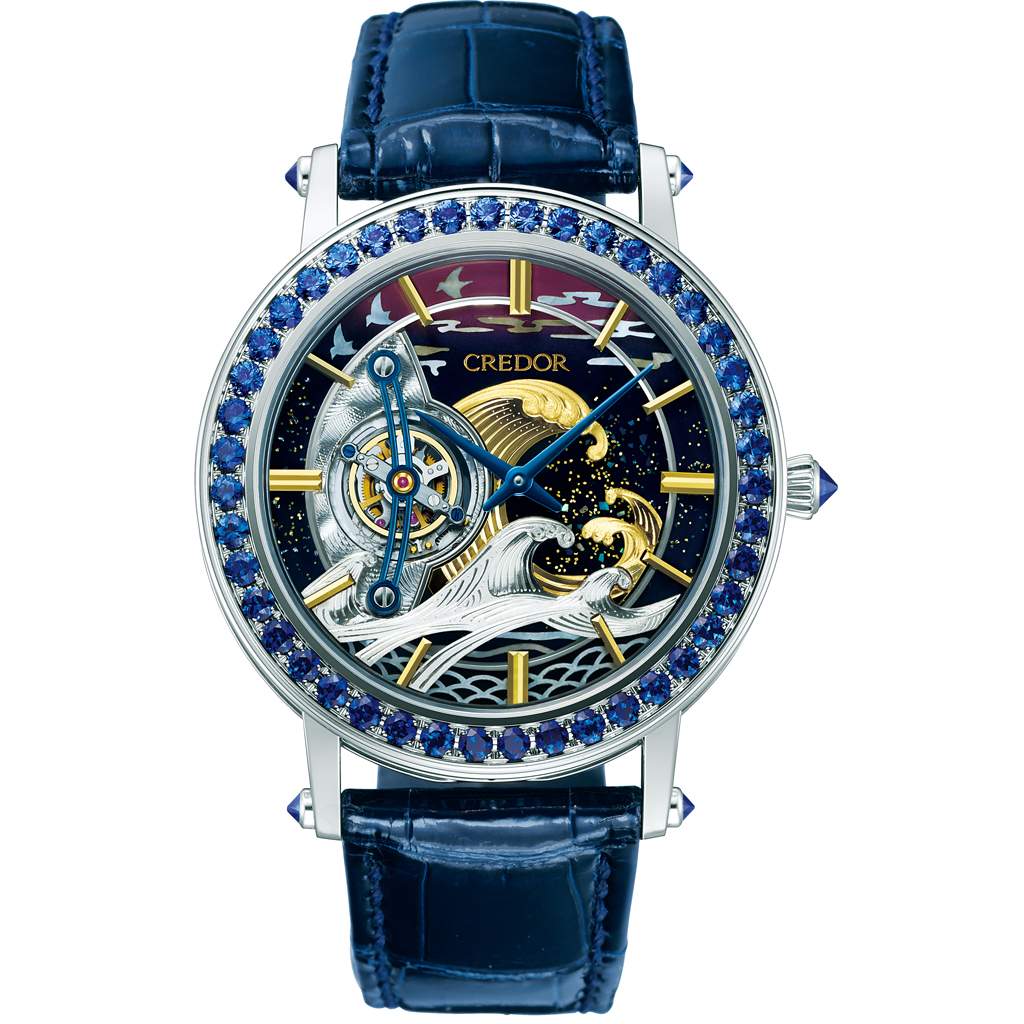 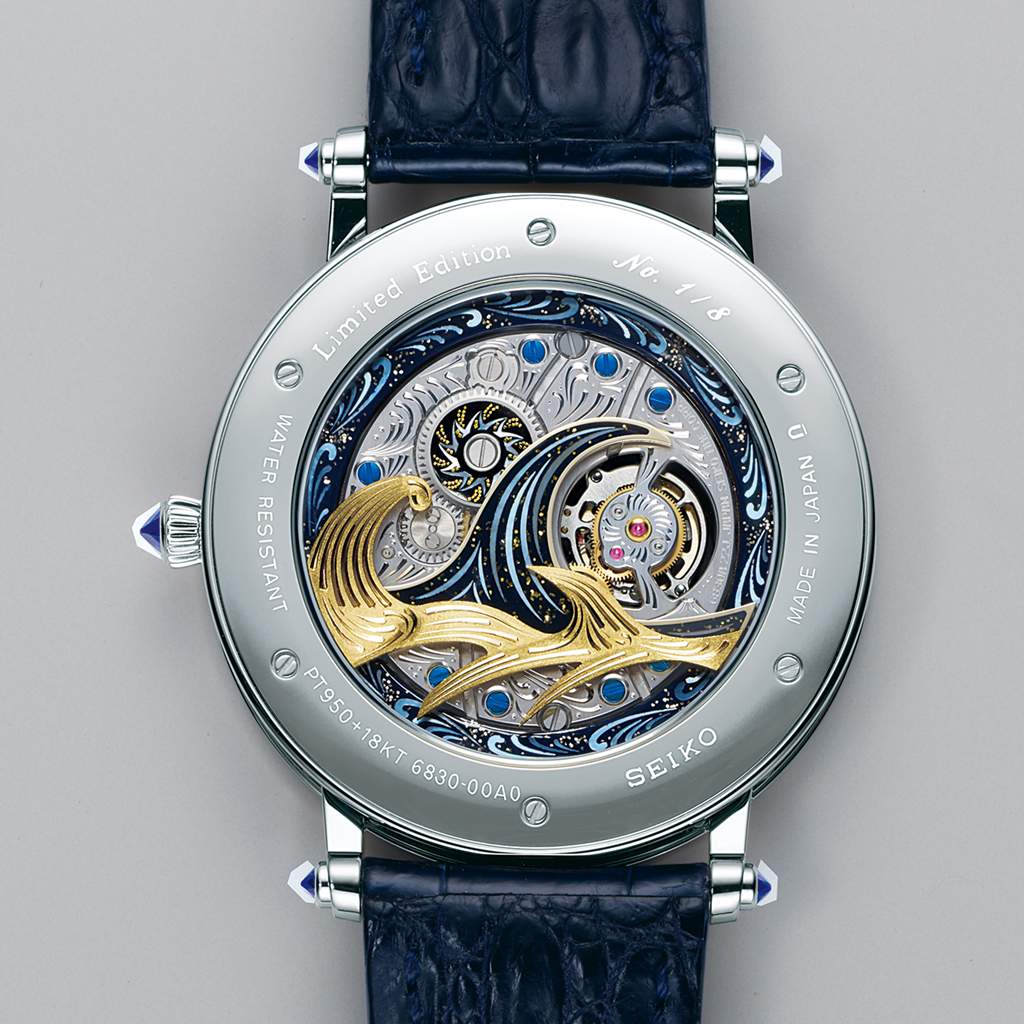 The first ever tourbillon from Seiko, A tourbillon with three-dimensional engraving and lacquer work inspired by the art of the Edo period.

Based on Credor’s ultra-thin movement, Caliber 68, the Fugaku Tourbillon Limited Edition demonstrates Japanese craftsmanship at its finest in its movement adjustment, its metal engraving and its lacquer finishing.
It is a masterpiece created by the diverse skills of three of Seiko’s most experienced craftsmen, all of whom have been recognized as Contemporary Master Craftsmen by the government of Japan and two of them were awarded with the Meal with Yellow Ribbon. The watch’s name, FUGAKU, is a synonym for Mt. Fuji, the mountain that inspires the design.

The new tourbillon movement, caliber 6830, is less than 4mm thin and is made and assembled by
Satoshi Hiraga. Kiyoshi Terui is the engraver, and the overall design, including the integration of the tourbillon, metal engraving, and lacquer work, is the work entrusted to Nobuhiro Kosugi. Urushi expert Isshu Tamura contributes the lacquer finish. Together, their skills and advanced techniques have yielded a work of art that expresses the essence of the Japanese sense of beauty.

Katsushika Hokusai’s series ‘Thirty-six Views of Mount Fuji’ is renowned worldwide and is an icon of Japanese culture. Painted in the 19th century in the Edo period, The Great Wave off Kanagawa brought Hokusai worldwide fame, thanks to its strikingly dynamic composition and use of perspective.

This print inspired the creation of this watch.

The delicacy of the dial engraving is extraordinary. Kiyoshi Terui worked to the limits of his technical skill in engraving to breathe three-dimensional life into the wave that dominates the scene depicted on the dial. The 18k yellow and white gold wave is 1.6mm at its thickest and 0.5mm at its thinnest.

The Fugaku model has unique colors that are born out of the combination of engraving and lacquer. By introducing a world of color into the intricate engraving, the carved design comes to shine prominently with three-dimensional depth. The scene behind the dial evokes a sky at dawn, with a lush gradient of navy blue to purple brought to life through the colored lacquer. The extremely advanced techniques required in the creation of the color gradient are the product of hours of painstaking effort by the world-renowned lacquer artist Isshu Tamura, all to express the most precise of hues in a lacquer that is just 0.1mm thick. The Credor emblem on the dial is also handcrafted by Mr. Tamura in gold lacquer, or Maki-e.

Fine mother-of-pearl work adorns the traditional Japanese Seigaiha (waves in a blue ocean) patterning on the 6-side and the clouds and plovers on the 12-side, meticulously expressing the richness of Japanese natural scenery. Each of the hour markers is also richly finished in 18K yellow gold.

The reverse side of the watch features the same wave, combining engraving and lacquer finishing to create a modern, sharp and brilliant version of the theme. On the balance wheel bridge is the outline shape of Mt. Fuji.

The magnificent 43mm diameter platinum case is adorned with forty-three blue sapphires, arrayed in harmony with the dial in a beautiful gradation of color. The case side is inlayed with mother-of-pearl providing an intricate finish.

Caliber 6830 is a mechanical movement based on the ultra-thin Caliber 68 family, and is Seiko’s first ever tourbillon movement. Caliber 6830 was created utilizing the utmost in mechanical movement manufacturing expertise, with the base part a mere 1.98mm thick. Including the carriage, the whole movement measures just 3.98mm in depth, and the diameter is just 25.6mm, with the result that it is the world’s smallest tourbillon by volume*. The volume has been reduced by the use of a unique pallet fork design and by the integration of the wheel and bridge. Weight, too, has been reduced with the use of titanium in some parts of the carriage.

* As of March, 2016. Based on Seiko’s research. Just eight watches will be made and they will be presented at Seiko’s Boutiques worldwide in 2016.