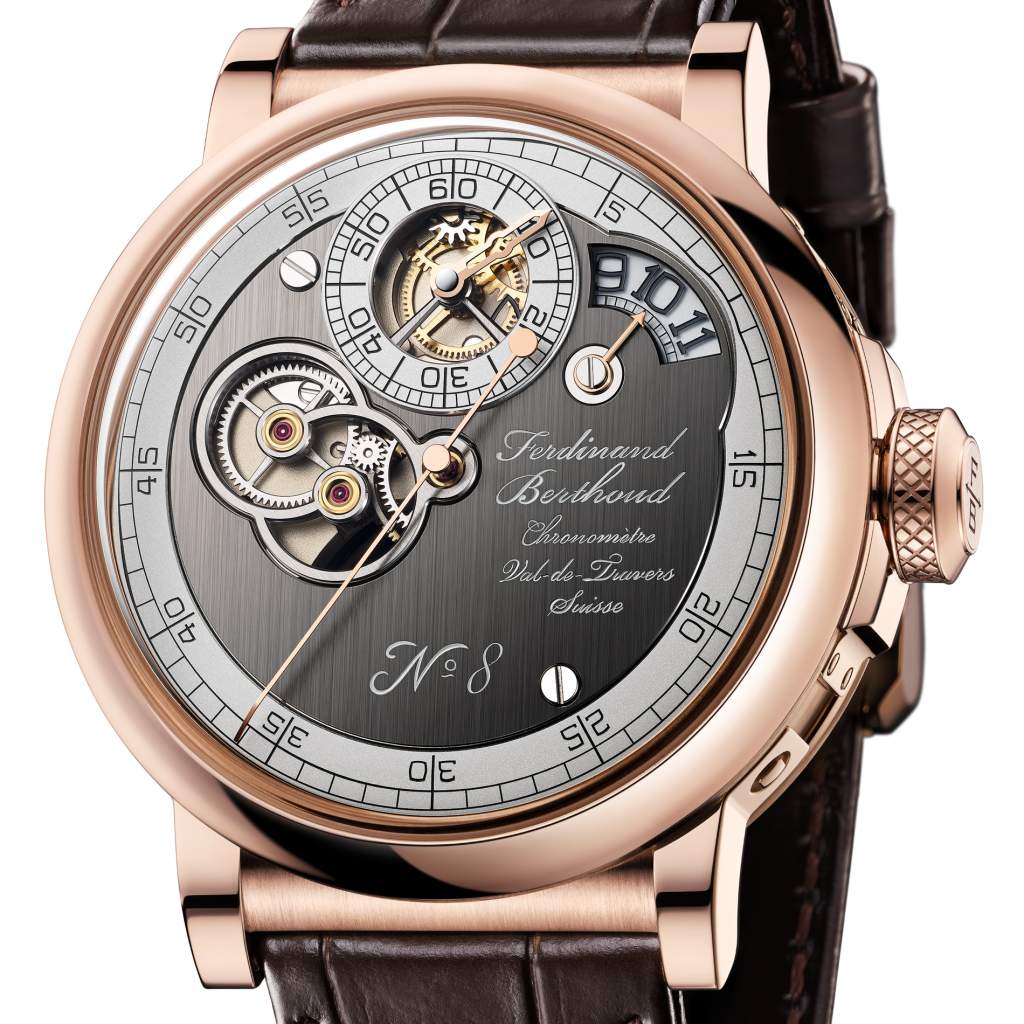 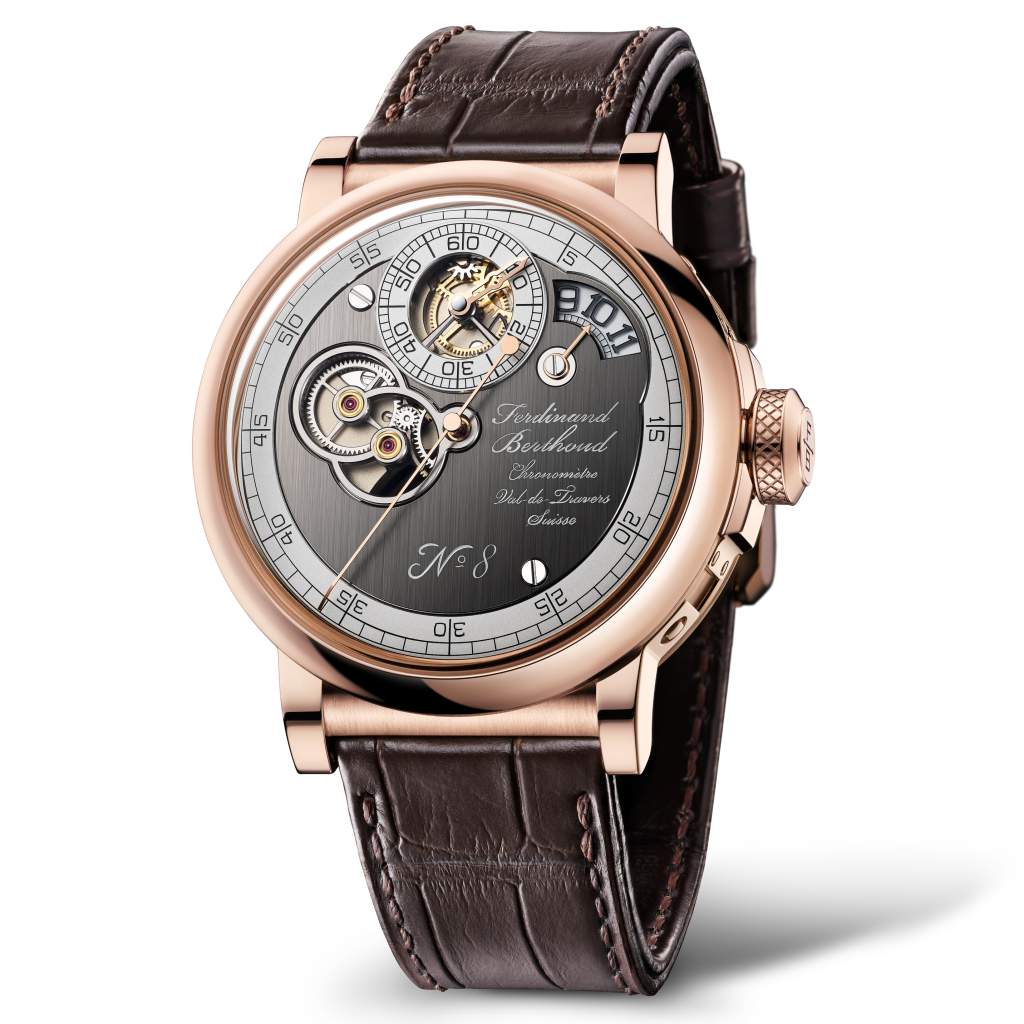 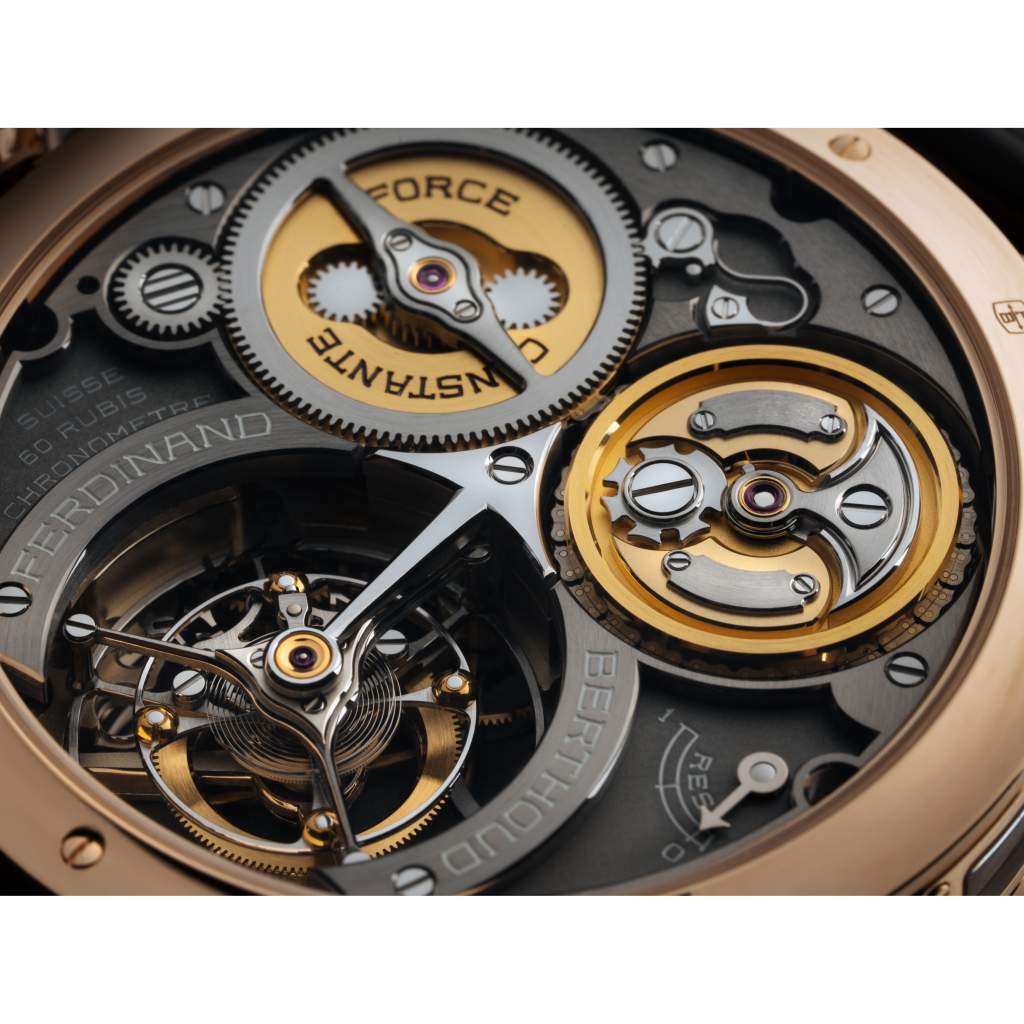 Chronomètre FB RSM is an original complication developed in the grand tradition of watchmaking apprenticeship. This tourbillon regulator with fusee-and-chain transmission incorporates for the first time a stop-seconds mechanism and an independent deadbeat seconds. This complication was developed with a young apprentice watchmaker who devoted his graduation project to it.

The historical source: Marine Clock No. 8

The Chronomètre FB RSM design is inspired by the Marine Clock No. 8, known as H.M.8, created in 1768 by Ferdinand Berthoud. This unusual clock has a regulator-type display, meaning the indication of the hours, minutes and seconds is not coaxial. This type of display made it possible to improve the reading of time and thus to serve as a reference for seaborne navigation measurements: this is the role of a ‘time-keeper’ instrument in the truest sense of the term.

The FB-T.FC-RSM calibre features a pillar-type architecture, in which both the barrel and the inverted fusee are suspended and patented. This fusee-and-chain mechanism is inspired by that of Ferdinand Berthoud's marine chronometers. It ensures the distribution of energy by delivering ‘constant force’ to the patented tourbillon with direct-drive seconds.

An exclusive horological complication, created during an apprenticeship

In terms of both display and operation, the Chronomètre FB RSM offers a present-day take on the regulator-type principle. The hours are read off via a rotating disc at 2 o'clock; the minutes are indicated on the subdial at 12 o'clock; and, as a symbol of precision, the seconds hand occupies a central position on the watch face. The “SM” letters added to the calibre reference pertain to the deadbeat seconds mechanism (seconde morte in French), while a balance-stop device enables the tourbillon to be stopped when setting the time to the exact second.

In keeping with the tradition cherished by Ferdinand Berthoud, this complication was developed with a young apprentice watchmaker who devoted his graduation project to it. His work combined the history of deadbeat seconds clocks, the identification of related patents, and the development of the complication for the Tourbillon Régulateur à Force Constante (constant-force tourbillon regulator) calibre which was to house it. Chronométrie Ferdinand Berthoud also wanted this complication to fit into the movement’s existing dimensions, while guaranteeing precision-timing performance duly attested by the COSC chronometer certification.

Deadbeat seconds and balance-stop device: the challenges of chronometry

The creation of a deadbeat seconds mechanism is a major challenge for any watch that claims to earn chronometer certification. This is because stopping and restarting the central hand in one-second jumps involves three steps: stopping the gear train concerned; storing the torque it continues to produce during this pause; and then releasing it all at once after one second. Since the regularity of the torque is the essence of a constant-force calibre, interrupting its flow 60 times a minute without compromising its linearity is a true technical feat – which is why the majority of deadbeat seconds movements fail to achieve COSC certification. The Chronomètre FB RSM has been awarded this certification and is therefore a true timekeeper, like the Marine Clocks by the Master Watchmaker himself.

The 18-carat gold dial is hand-engraved and bears the "No. 8" inscription like the original No. 8 Marine Clock, the inspiration for the FB RSM model. The deadbeat seconds mechanism is visible through a special symbolically figure-eight-shaped aperture at 9 o'clock.

Only 20 movements are produced, and several key elements can be chosen by the collector. The model FB 2RSM.2-1 features a round case made of 18-carat rose gold and a vertical satin-brushed dial with black rhodium treatment.