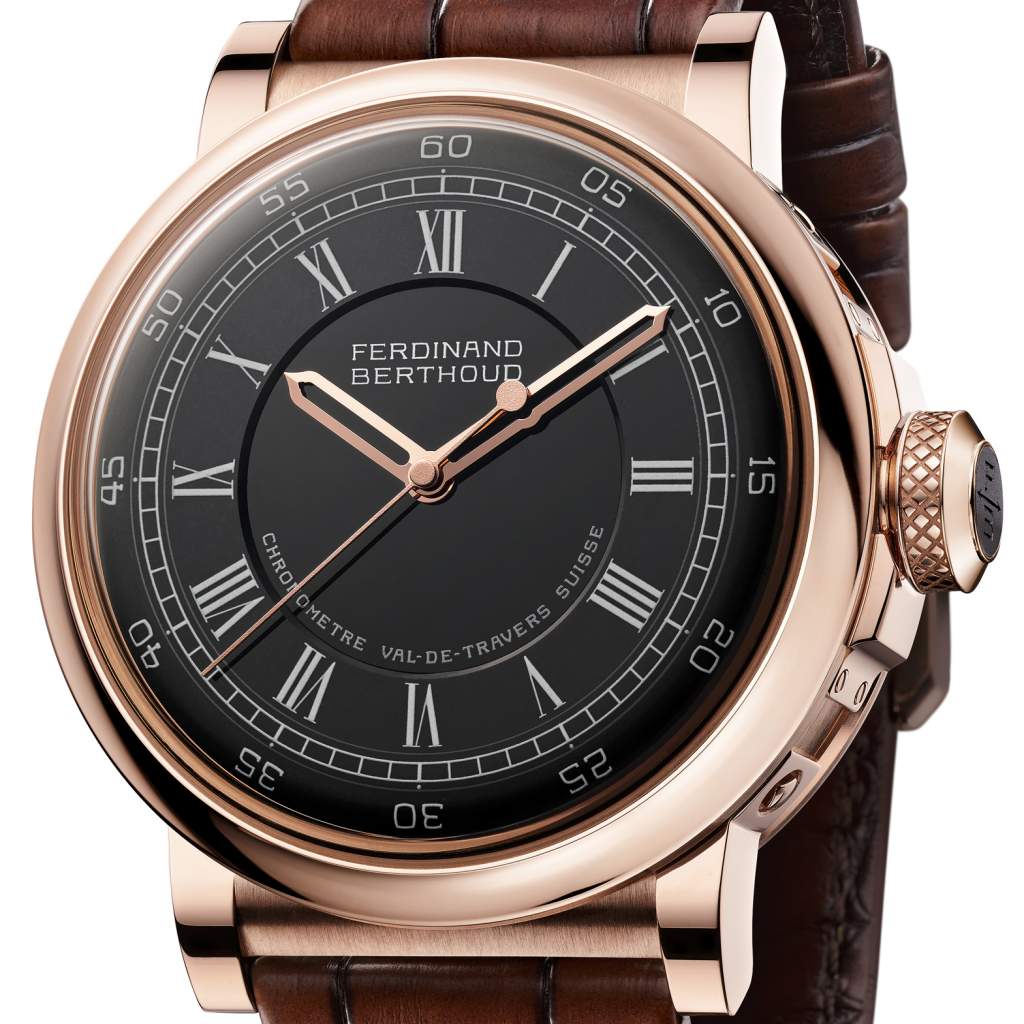 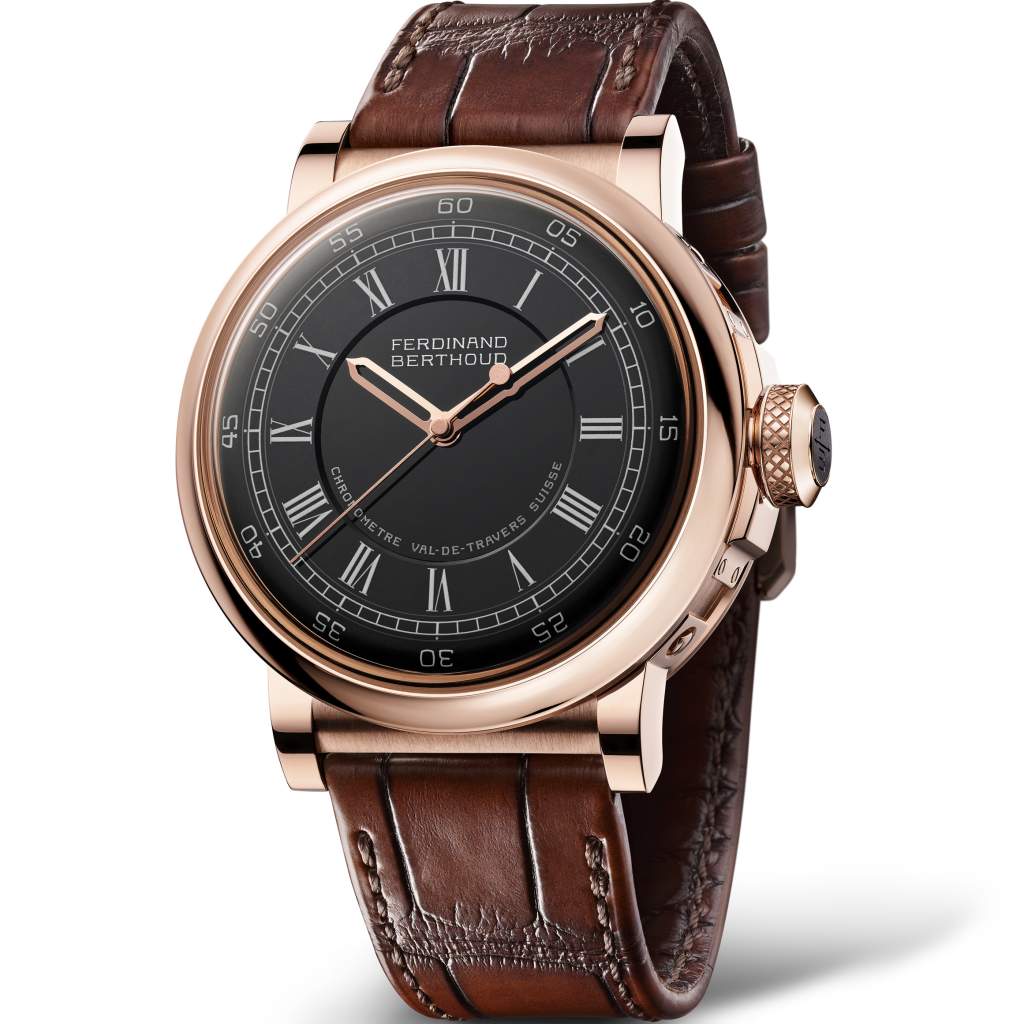 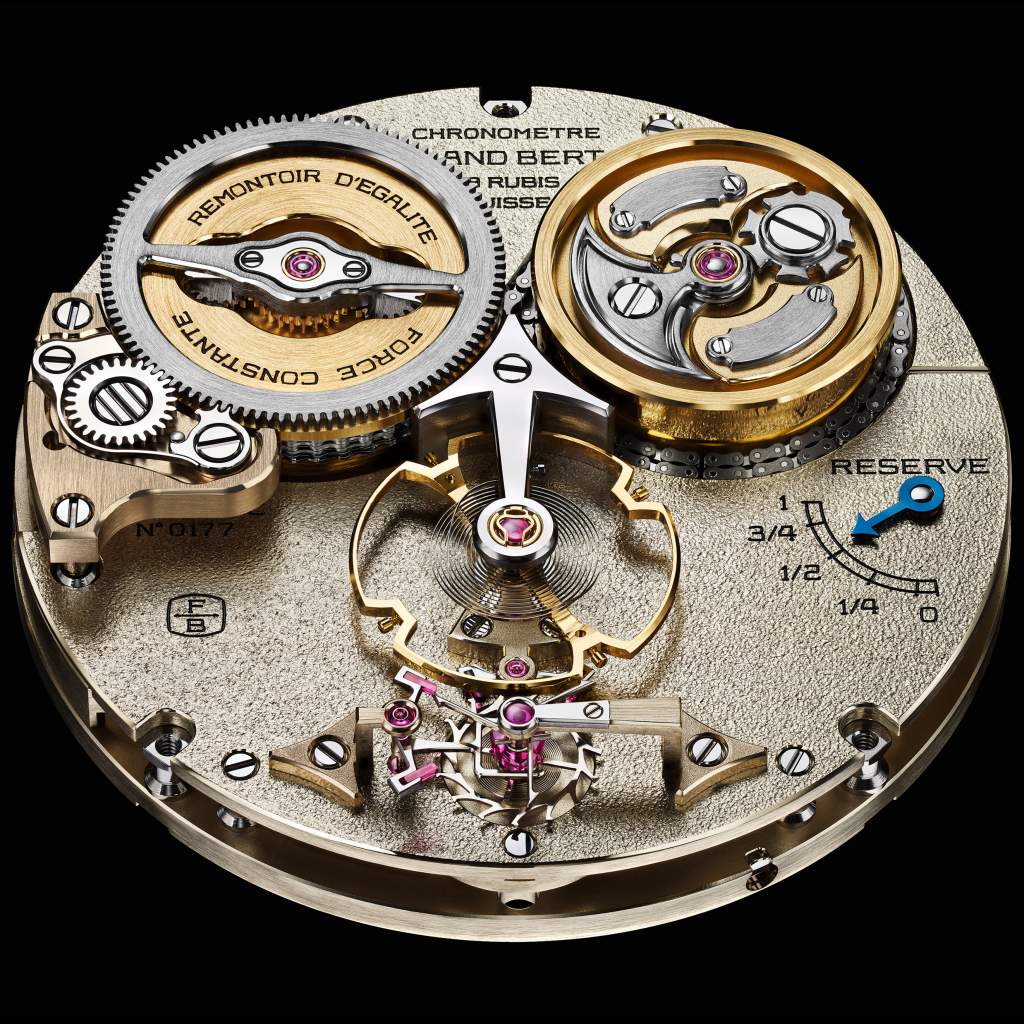 THE NEW CHRONOMÈTRE FB 2RE: AN UNPRECEDENTED MECHANICAL FEAT

In 1770, Ferdinand Berthoud was awarded the title of "Clockmaker and Mechanic by appointment to the French King and Navy". Chronométrie Ferdinand Berthoud is celebrating this 250th anniversary by unveiling a new collection inspired by the Marine Clock No.6: the Chronomètre FB 2RE.

This new timepiece reinterprets the architecture and design of this Marine Clock. Fitted along its middle with a large panoramic window, the round 18-carat gold case frames a grand feu enamel dial with a complex two-tiered construction.

Beneath this traditional, uncluttered display lies an exceptional mechanism: the new Chronomètre FB 2RE combines the emblematic fusee-and-chain transmission with a one-second remontoir d’égalité mechanism. A model charting a course towards a new world of mechanical precision entirely in keeping with the lifework of Ferdinand Berthoud.

FROM THE MARINE CLOCK No. 6 TO THE CHRONOMÈTRE FB 2RE

As described by Ferdinand Berthoud in his Traité des horloges marines (Treatise on Marine Clocks) published in Paris in 1773, the mechanisms of Marine Clocks are protected by a cylindrical copper drum, itself held in a horizontal position by a gimbal suspension system that he invented.

The case of the Chronomètre FB 2RE picks up the shape of these Marine Clocks and this modular construction. The movement is installed in a cylindrical container made of 18-carat gold and water-resistant to 30 metres. Short, tapering all-of-piece lugs are solidly secured to the case by stylised bolts and ensure the Chronomètre FB 2RE smoothly moulds the contours of the wrist.

A large panoramic window appears at 10 o'clock along the case middle in a screw-down frame and reveals the movement's pillar-type architecture, as well as the barrel and its chain.

In order to facilitate reading off the hours and minutes during sea voyages, Ferdinand Berthoud had designed a two-tiered dial with two types of graduations for his Marine Clock No. 6: in the centre, the hours indications in Roman numerals stand out from the minutes circle in Arabic numerals appearing on the circumference.

The dial construction of the Chronomètre FB 2RE follows this same principle, while adding an additional degree of complexity by opting to craft it in grand feu enamel. This dial is thus composed of two elements: one is domed, located on the periphery and designed to bear the graduated scale; while the second, positioned centrally and slightly lower, is a flat medallion. Both are made of grand feu enamel, which requires numerous firings in a special kiln at a temperature of 800°C. Their base is made of non-magnetic steel, a choice that requires perfect compliance with the required temperatures and extremely precise firing times in order to avoid any distortion, while also preventing the excess thickness resulting from the traditional counter-enamel.

The FB-RE.FC calibre is built according to an architecture unique in contemporary watchmaking and specific to Chronométrie Ferdinand Berthoud. This mechanical movement with manual winding comprises 26 bridges held by 10 steel pillars, surrounding the mechanical parts. This construction is characteristic of 18th century Ferdinand Berthoud marine chronometers.

A NEW APPROACH TO PRECISION TIMEKEEPING

The FB-RE.FC calibre is one of the rare examples to feature fusee-and-chain transmission, serving to ensure constant force for the escapement. It acts like an infinitely variable automatic reduction gearbox.

The torque delivered by the barrel of a watch movement naturally varies according to the degree of winding. In this type of transmission, when the movement is fully wound, the chain is completely wrapped around the small end of the spindle-shaped fusee and the mainspring is at maximum power. This force dwindles in the course of time, as the chain coils around the drum, moving from the small to the large end of the fusee.

The variation in the diameter of the fusee compensates for the reduction of the mainspring torque. The gear train thus receives a constant supply of energy, a pre-filtering of the energy arriving at the remontoire.

Exceptionally, the FB-RE.FC calibre, in addition to the constant-force mechanism, is equipped with a one-second remontoire visible on the back of the movement. It is one of the most complex torque regulation systems in the history of time measurement.

Far from duplicating the role of the fusee, this device complements its action by acting on another point. The fusee equalises the torque reaching the gear train, yet irregularities are created when the teeth mesh. These torque variations, of a much smaller magnitude than those generated by the uncoiling of the mainspring, are nevertheless important in light of the precision demanded by Chronométrie Ferdinand Berthoud.

The Chronomètre FB 2RE remontoire is of a distinctive type in that it is fitted concentrically with the escape-wheel and thus directly connected to the escapement. This device is designed to store a small amount of energy in a secondary hairspring, playing a driving rather than a regulating role. It delivers its force to the balance via the escapement at such short intervals that the variation of the force in the hairspring is not taken into account. In this case, Chronométrie Ferdinand Berthoud has opted for a one-second release.

The force from the barrel is transmitted to the remontoire spring by means of a triangular ruby cam. When the escape-wheel has moved 2.5 teeth forward, the ruby cam releases the stop lever, that of the remontoire, and allows the driving force to enter the remontoire system. It is then charged for the next second.

The escape-wheel pinion is connected to the stop wheel and marks off the seconds. The entire assembly is connected to the central seconds hand and enables the Chronomètre FB 2RE to display true seconds, or deadbeat seconds, like marine chronometers or regulator-type longcase clocks.

The remontoire is traditionally very energy-intensive, particularly because of the friction it generates. Chronométrie Ferdinand Berthoud has reduced this friction by installing the remontoire where the torque is lowest. The escape wheel is the one that receives the least force from the entire gearing and is therefore the best candidate for the position. In addition, the use of the ruby cam and an extremely light seconds hand (0.01 grams), thanks to the use of titanium and an extremely tapered shape, reduces the weight driven by the remontoire.

All these decisions together enable the FB-RE.FC calibre to offer a power reserve of 50 hours. This is indicated on the back of the movement by means of a blued arrow-shaped hand placed on a sector engraved on the mainplate. The barrel stores energy for several more hours, but the stopwork system blocks it outside the guaranteed precision timekeeping (chronometry) range.

THE QUINTESSENCE OF HOROLOGY

Historically, high-precision timepieces have been based on work to optimise the regulating organ, and Ferdinand Berthoud also made interesting modifications to his chronometers throughout his career. Chronométrie Ferdinand Berthoud has followed in his footsteps by inventing a new two-spoke variable-inertia balance with an aerodynamic shape and four inertia blocks. Its large diameter guarantees its inertia and stability, with a low frequency of 18,000 vibrations per hour, thereby safeguarding the power reserve. It also enables slow oscillation, pleasing to the eye and similar to that of historical timepieces.

In order to guarantee optimal precision, the Chronomètre FB 2RE is equipped with a stop-seconds device, which brings the balance to a halt when the crown is pulled out. The wearer can then synchronise the watch to the nearest second with the time displayed by a reference timepiece, in the same way that observation watches were synchronised with marine chronometers on an exploration vessel.

The arrow-shaped steel balance bridge is mirror polished, as is the upper part of the stepped escape-wheel bridge. The barrel and the fusee are satin-brushed, as are all 790 components of the chain. Finally, all the movement parts are hand-chamfered and bevelled with traditional tools by the artisans of Chronométrie Ferdinand Berthoud.