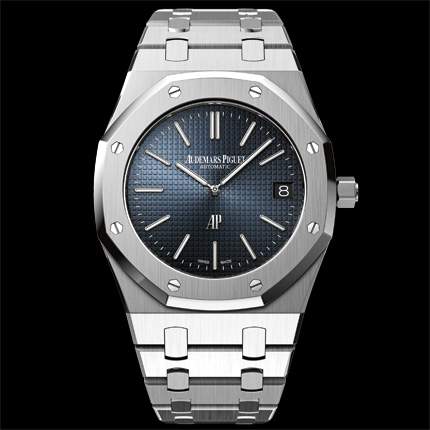 If one were to set aside just one model to go down in history, it would definitely be this one! It is the Royal Oak that has been exercising such a profound influence since 1972 and has left a deep and lasting imprint on the contemporary watchmaking history. It boasts the same prestigious steel case housing the same extra-thin mechanical movement, and this very longevity offers eloquent proof of a strong and inimitable character. A staple fixture of the collection thanks to its unabated success, the world's first prestige sports watch in steel is as sensational as ever.

This new reference comes as close as one could imagine to the original: connoisseurs will appreciate the fact that its dial picks up the “Petite Tapisserie” pattern that was already characteristic of the 1972 Royal Oak, and which prefigures the new norm for Extra-Thin Royal Oak models. This motif is crafted in-house on historical machines according to the ramolayé or pounced ornament technique. This process enables simultaneous cutting of squares interspersed with a gridwork pattern of fine grooves. The superimposition of two decorations, which is a unique feature of Royal Oak dials, endows them with incomparable radiance. Other historical nods include the distinctive blue colour of the dial – and for the first time of the disc date – which is inspired by the shade of the original model; as well as the white gold AP initials placed at 6 o'clock just as they were back in 1972.

There are also naturally several other family likenesses with the historical Royal Oak. Even the 39 mm diameter, considered completely outsized 40 years ago, is now entirely in tune with the times. The case middle, bezel, crown, bracelet and folding clasp are all made of steel, exactly like the model that revolutionised the Fine Watchmaking world 40 years ago. Just as the eight hexagonal screws on the octagonal bezel are as ever in white gold, the bracelet seamlessly integrated with the case and features the collection's unmistakable aesthetic, characterised by perfectly assembled links and studs arranged in progressively diminishing order of size.

This new Extra-Thin Royal Oak beats to the rhythm of the same movement as the original model. The extra-thin mechanical selfwinding Calibre 2121 with a window-type date display measures a mere 3.05 mm thick. Comprising 247 parts, it has a 40-hour power reserve and a frequency of 19,800 vibrations/hour (2.75 Hz). The monobloc oscillating weight, entirely made of 22-carat gold, is embossed with the inscription “AP Audemars Piguet”. Its external segment is adorned with a “Petite Tapisserie” that is to be a signature feature of all Extra-Thin Royal Oak watches.

More loyal than ever to the original 1972 model, this new Extra-Thin Royal Oak watch is also available in a pink gold version.