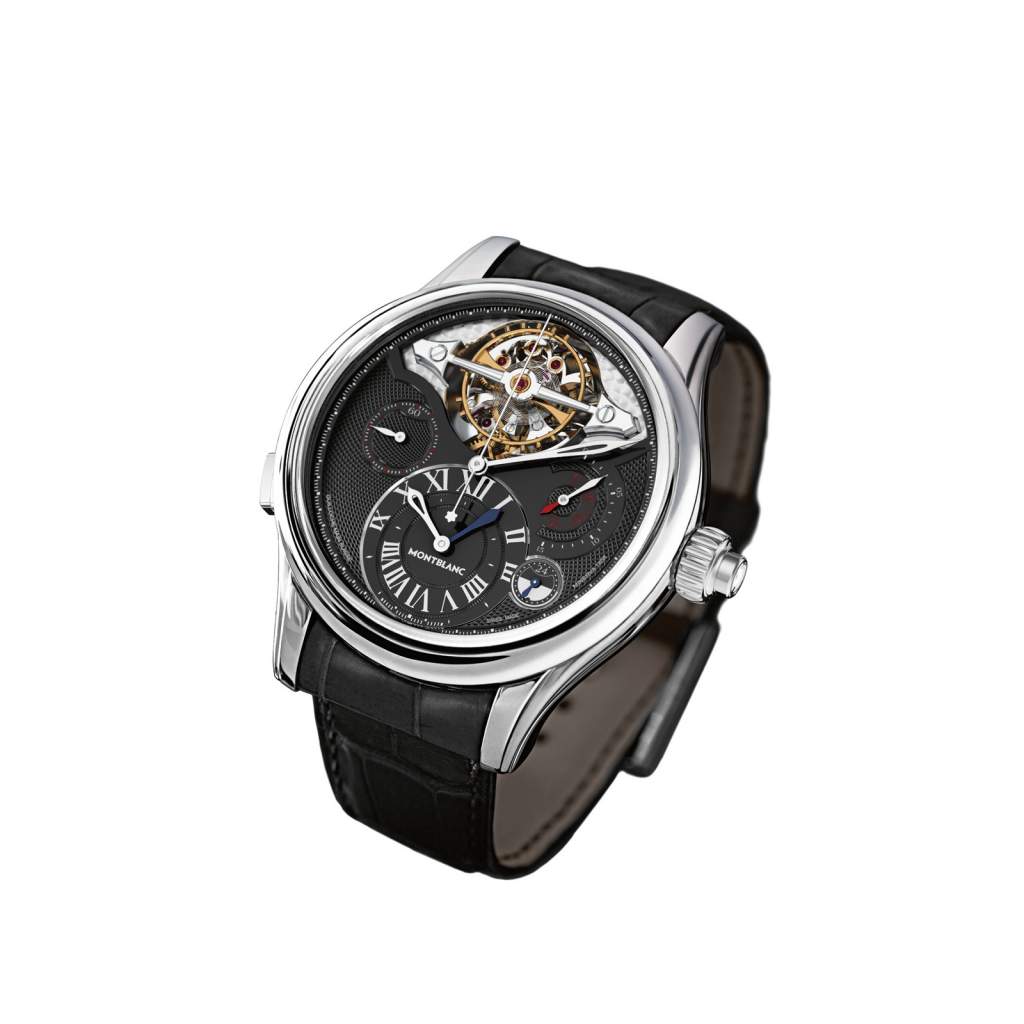 The new ExoTourbillon Chronographe is a regulator watch with a large centrally axial minute-hand, a distinct hour display, an indicator for the time in a second time zone (with day/night display), a subdial for the seconds, a chronograph with a counter for 30 elapsed minutes, and an absolutely unprecedented tourbillon with a balance larger than the tourbillon's rotating cage and positioned outside it.

The ExoTourbillon Chronographe is the first watch in Montblanc's Villeret 1858 Collection to unite two of the most avidly admired horological complications: a chronograph function and a tourbillon. Mastery of the difficulty of crafting these complications numbers among the distinguishing characteristics of Montblanc's manufacture in Villeret, which has here combined the two complications in a highly unusual fashion: the chronograph upholds the lovely tradition with a column-wheel and horizontal coupling, and the four-minute tourbillon boasts a never-before-seen innovation. The balance has been separated from the cage to isolate it from the disturbing movements of the escapement. This separation made it possible to create the world's first tourbillon in which the rotating cage is smaller than the balance, which oscillates outside the cage and on a higher plane. This technical achievement has been filled for patent by Montblanc.

The reason for this most elaborate construction is that the traditionally large and massive balance would have required a comparably large rotating cage if it had been positioned within a conventional tourbillon. A smaller tourbillon has less mass and consequently requires less energy for its rotations. The rotating cage is also freed from the weight of the balance, which further reduces the amount of energy it consumes. This architecture requires about 30% less energy than conventional constructions. The energy saved here can be used to power the chronograph's functions.

Another essential advantage: being separated from the rotating cage, the balance is not adversely affected by the inertia of the cage and consequently oscillates with greater precision. This innovation is entirely in accord with the statutory task of Montblanc's manufacture in Villeret: namely, to cultivate the authentic Swiss watchmaking tradition and to combine it with ongoing innovation, thereby assuring a bright future for this noble and artful handicraft. The owner of an ExoTourbillon Chronographe can enjoy the spectacular vista of a large balance (with weight screws along its rim) that's free to oscillate in all its beauty and turns around its own axis with the four minute tourbillon, but without being cramped inside the narrow confines of the tourbillon's cage.
© Fondation du Grand Prix d'Horlogerie de Genève