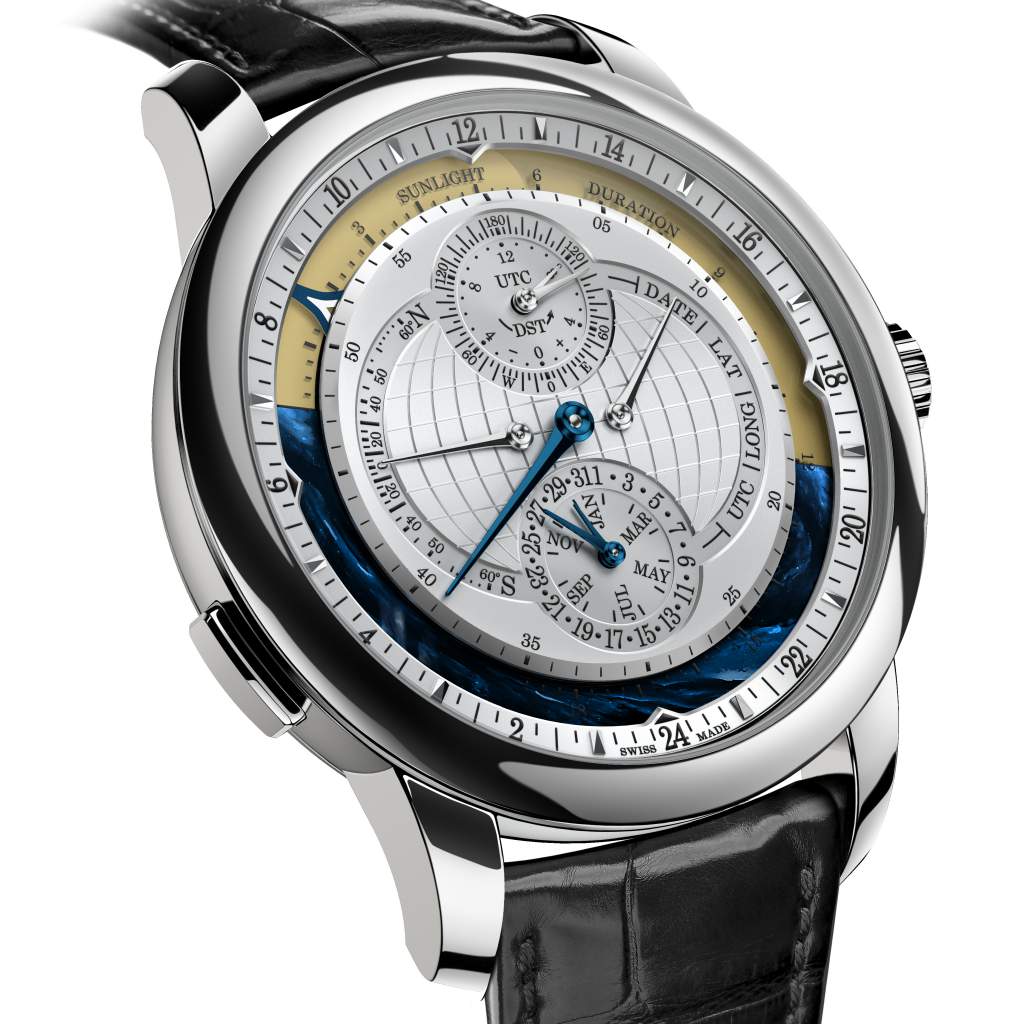 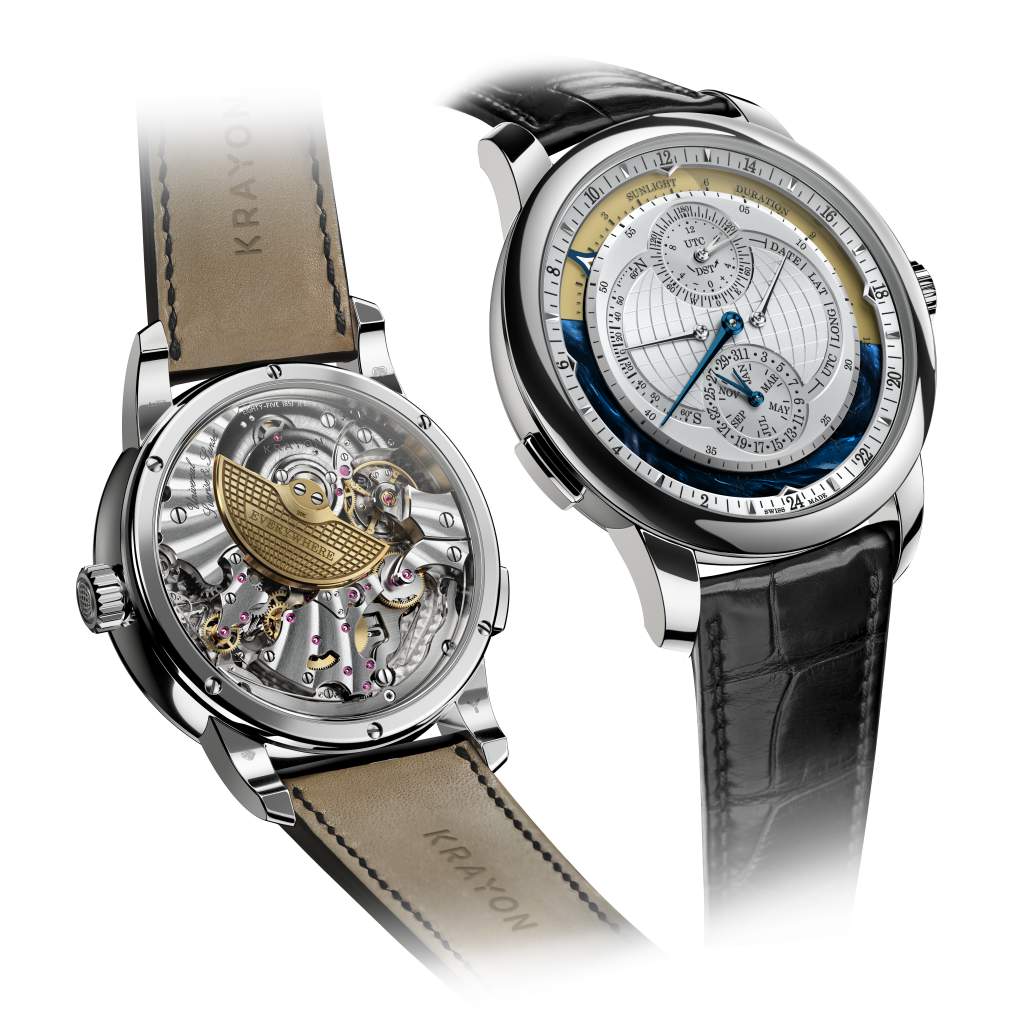 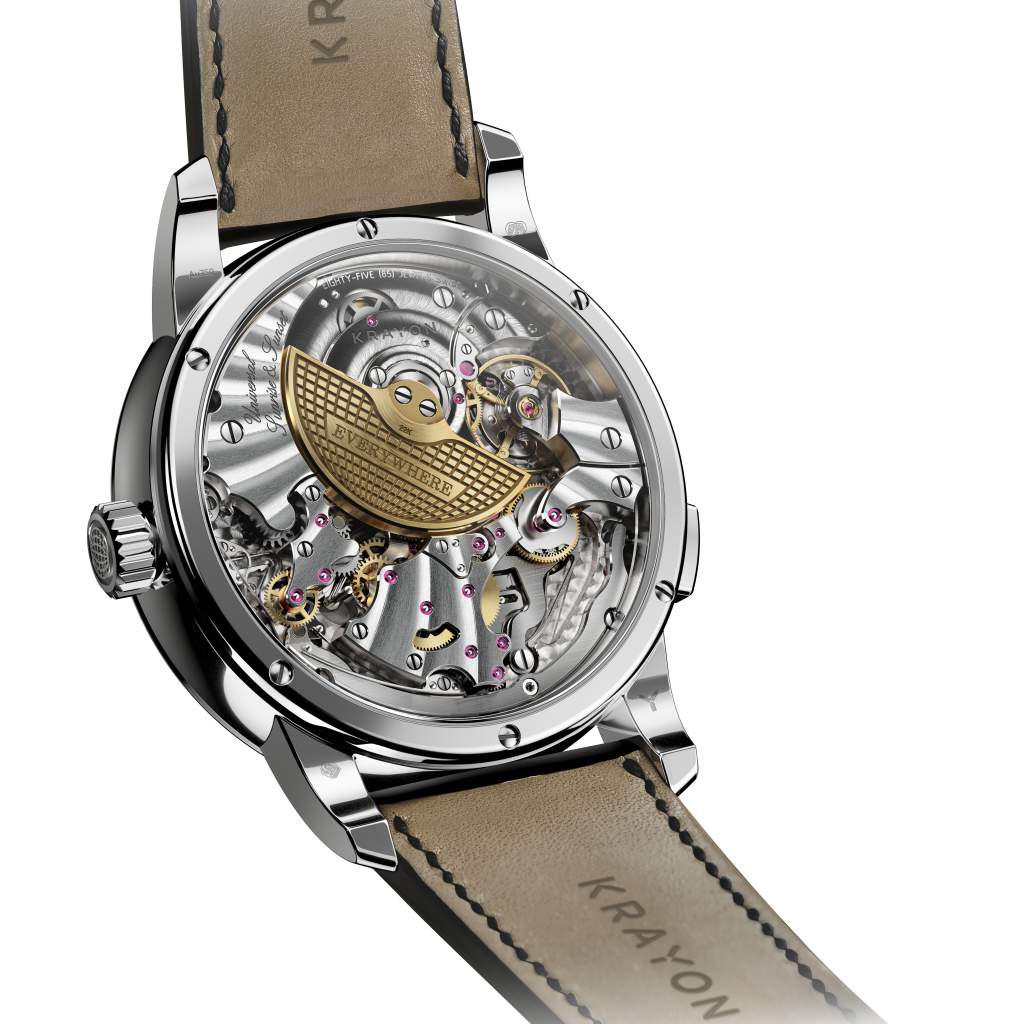 The universal mechanical calculation of sunrise and sunset time.

Imagine what it would be like to know when the sun will appear and disappear, anywhere on Earth, thanks to a mechanical watch. Movement developer Krayon presents Everywhere, with a truly unique and ingenious complication that calculates sunrise and sunset times.

On land and at sea, the path of the sun across the sky underpins the notion of time and is even a way to measure its passing. Krayon's engineers nurtured their dream to be able to know sunrise and sunset times at any point on the globe, thanks to a mechanical movement. By making this dream reality, they have achieved something totally unprecedented in watchmaking: a universal mechanical calculator that gives the exact sunrise and sunset times. What's more, this innovative complication is adjusted simply by the crown. The USS calibre, short for Universal Sunrise Sunset, equips the Everywhere watch whose dial transposes to the wrist a fascinating astronomical phenomenon: the movement of the sun across the sky, wherever the wearer of the watch may be.

A glance at Everywhere's dial reveals the number of daylight hours on a lighter coloured circle, yellow or pink depending on the version. A darker circle symbolises night. The point at which the two circles meet corresponds to sunrise and sunset. As the seasons change, or at different locations, the number of daylight hours lengthens or shortens. A blue arrow on the edge of the dial materialises the path of the sun as it travels through the sky.

Everywhere reaches this seemingly simple result by combining the five parameters that influence sunrise and sunset calculations. First longitude and latitude, which geographically define a point on Earth, then the UTC time zone, and lastly the date and month. The watch's wearer sets each one as required to then see the precise hour at which the sun will appear and disappear, in the place of his choice and on the day he wishes.

The hands and indicators in daily use – date and time – are in blue to visually stand out for maximum legibility. Contrasting with them, the hands corresponding to the settings have a softer colour which can be white gold or pink gold, depending on the version.

Hours are read from the contour of the dial thanks to a blue arrow on a 24-hour scale, which also shows how many hours have passed since the last sunrise. Minutes are shown by a large central hand. A subsidiary dial in the upper part of the main dial displays longitude between +180° and -180°, shown by the longest of the two hands. The shorter hand points to the UTC time zone and advances in half increments to take into account every time zone in use around the world. When required, the DST (Daylight Saving Time) indication adjusts for summer time. Two hands occupy the centre of the main dial: the one on the left covers latitude between +60° and -60° while the hand on the right shows the chosen parameter: date, latitude, longitude or UTC. A subdial in the lower portion of the dial presents date and month.

Despite Everywhere's capacity to combine and display multiple parameters, the engineers at Krayon have ensured that setting these parameters is simplicity itself. The item in question date, latitude, longitude, UTC is selected using the pusher on the left side of the case, then set from the crown. The default setting is the date as this corresponds to the most frequently used function. Furthermore, adjustments can be made by turning the crown forwards or backwards, thereby protecting the mechanism against damage caused by mishandling.

The concept of the USS calibre is nothing short of exceptional. All 595 components have been designed and manufactured specifically for it, thanks to which Krayon's engineers have succeeded in producing a surprisingly compact movement - given its immense complexity measuring 6.5mm high. This ingenious calibre is able to combine parameters that give opposing information, such as sunrise and sunset times. It also incorporates an equation of time, a secret function that is not shown on the dial, in order to calculate the different parameters. The USS calibre is fitted with four differentials, 84 gear assemblies and a total of 145 gear parts. Three patents have been filed to protect these inventions. Automatically wound by a white gold micro-rotor, the USS calibre delivers a 72 hour power reserve and beats at a frequency of 3 Hz.

The finishing and decoration of Everywhere are entirely by hand, in keeping with Swiss traditional haute horlogerie techniques. Two versions are proposed, both with a 42mm case size, in pink gold or in white gold, and can be fully personalised on request.

Thanks to an unprecedented complication universal calculation of sunrise and sunset times, Everywhere invites you to look skyward and contemplate the movement of the sun, one of the foundations of the notion of time.