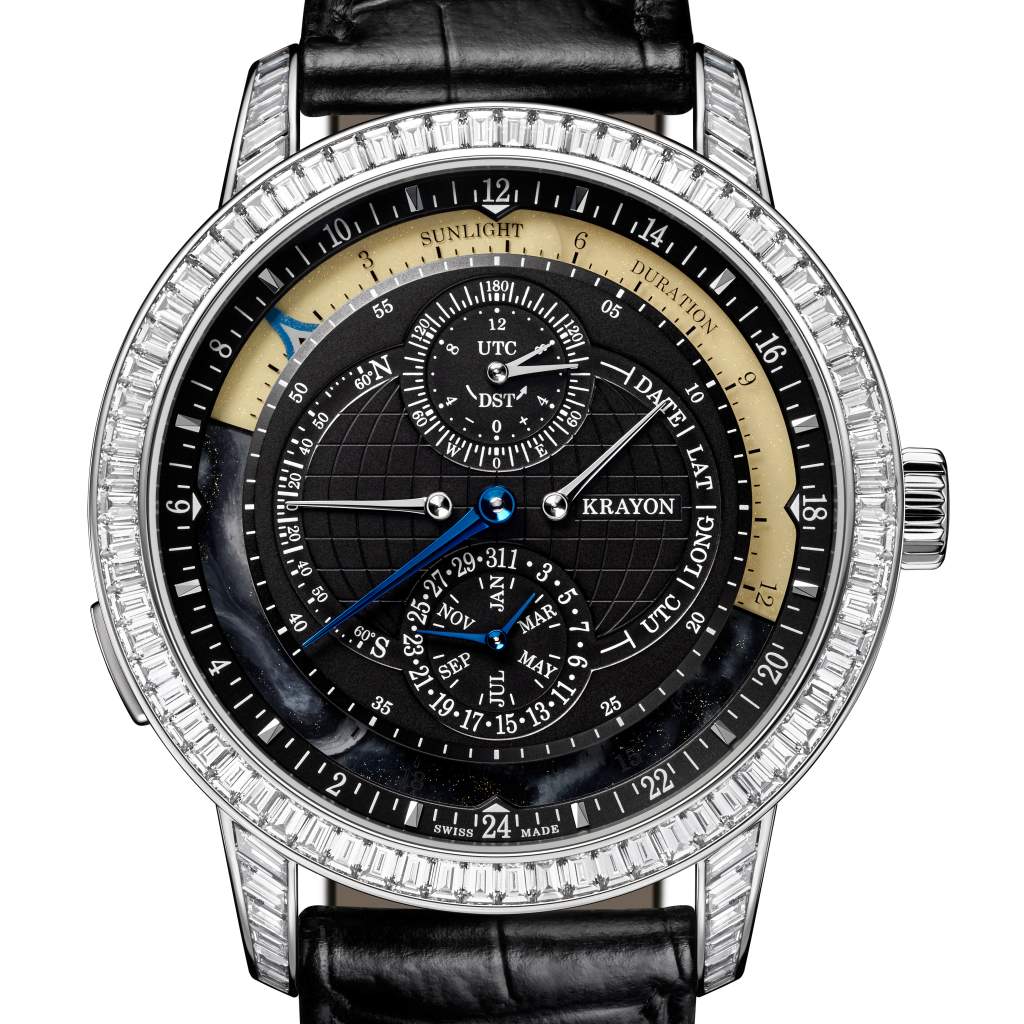 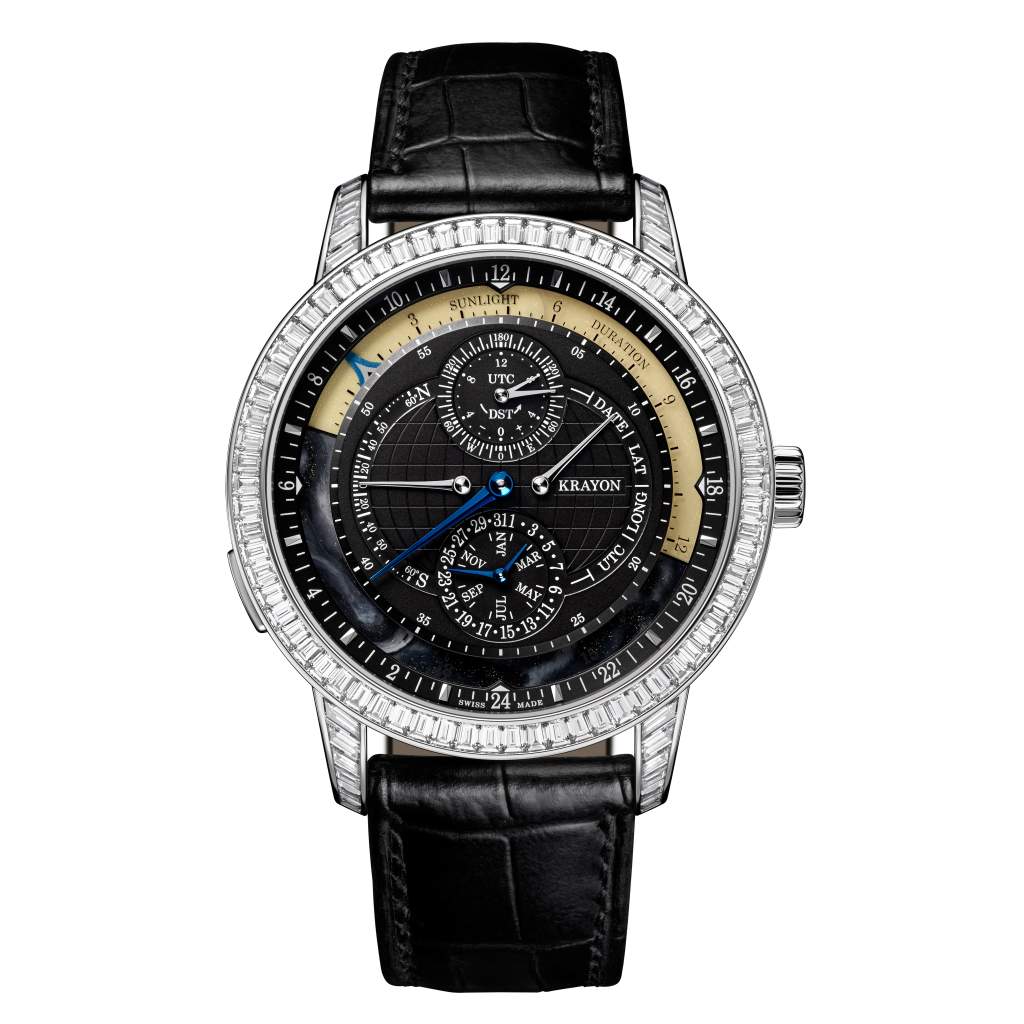 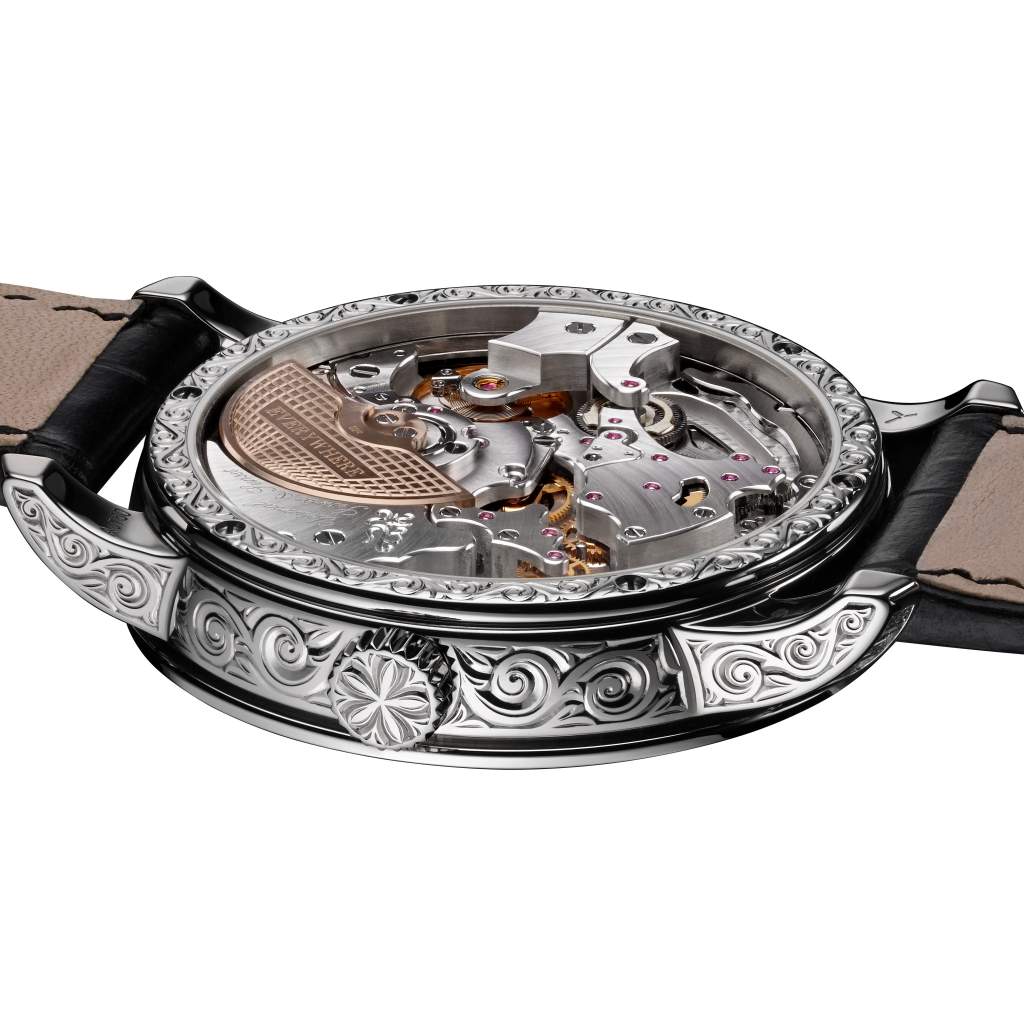 The universal mechanical calculation of sunrise and sunset times

After the presentation in May 2017 of the first Everywhere watch, Rémi Maillat, founder of Krayon, this year presents a new custom timepiece. Through exchanges with the client, taking his ideas into account and associating his personality with Krayon's own environment and its unique complication, Rémi Maillat has created Everywhere Horizon. On land and at sea, the path of the sun across the sky underpins the notion of time and is even a way to measure its passing. Krayon's engineers nurtured their dream to be able to know sunrise and sunset times at any point on the globe, thanks to a mechanical movement. By making this dream reality, they have achieved something totally unprecedented in watchmaking: a universal mechanical calculator that gives the exact sunrise and sunset times.

The outer dial materialises the whole day with its 24 hours scale. sunrise and sunset times are read on it where the day and night sectors meets. As the seasons change, or at different locations, the number of daylight hours lengthens or shortens. The blue arrow, indicating the hours on this same dial describes the path of the sun as it travels through the sky.

Everywhere Horizon reaches this seemingly simple result by combining the four parameters that influence sunrise and sunset calculations. First latitude and longitude, which geographically define a point on Earth, then the UTC time zone, and lastly the date and month. The watch's wearer sets each one as required to then see the precise hour at which the sun will appear and disappear, in the place of his choice and on the day he wishes.

The hands and indicators in daily use – date and time – are in blue for optimal legibility and to be easily distinguished from the hands that correspond to the other parameters. Hours are read from the outer dial thanks to a blue arrow on a 24-hour scale. Minutes are shown by a large central hand. A subsidiary dial in the upper part of the main dial displays longitude between +180° and -180°, shown by the longest of the two hands. The shorter hand points to the UTC time zone and advances in half increments to take into account every time zone in use around the world. The DST (Daylight Saving Time) indication reminds how to adjust for summer time. Two hands occupy the centre of the main dial: the one on the left covers latitude between 60°North and 60°South while the hand on the right shows the chosen parameter: date, latitude, longitude or UTC. A subdial in the lower portion of the dial presents date and month.

The engineers at Krayon have not only given Everywhere Horizon the capacity to combine and display multiple parameters; they have ensured that setting these parameters is simplicity itself. The item in question - date, latitude, longitude, UTC – is selected using the pusher on the left side of the case, then set from the crown. Furthermore, adjustments can be made by turning the crown forwards or backwards, thereby protecting the mechanism against damage caused by mishandling.

The concept of the USS (Universal Sunrise Sunset) calibre is nothing short of exceptional. All 595 components have been designed and manufactured to order, including the balance spring. Thanks to this, Krayon's engineers have succeeded in producing a surprisingly compact movement - given its immense complexity - measuring 6.5 mm high. This ingenious calibre is able to combine parameters that give opposing influence in result of Sunrise and Sunset times. It also incorporates an equation of time, a secret function that is not shown on the dial, used for the calculations. The USS calibre is fitted with four differentials, 84 gear assemblies and a total of 145 gear parts. Three patents have been filed to protect these inventions. Automatically wound by a gold micro-rotor, the USS calibre beats at a frequency of 3 Hz and delivers a 80-hour power reserve.The finishing and decoration of Everywhere Horizon are entirely by hand, in keeping with traditional haute horlogerie techniques.

Everywhere Horizon's case, which measures 43 mm in diameter, is singularised by a bezel set with 70 baguette diamonds, weighing some 3.50 carats in total. The lugs are also set with 24 baguette diamonds for a total of around 1.35 carats. The case itself is exquisitely decorated. This miniature sculpture is a combination of several engraving techniques and has been carefully executed by hand using gravers and other very specific tools. As a final flourish, Everywhere Horizon is mounted on a black alligator strap with a white gold pin buckle.