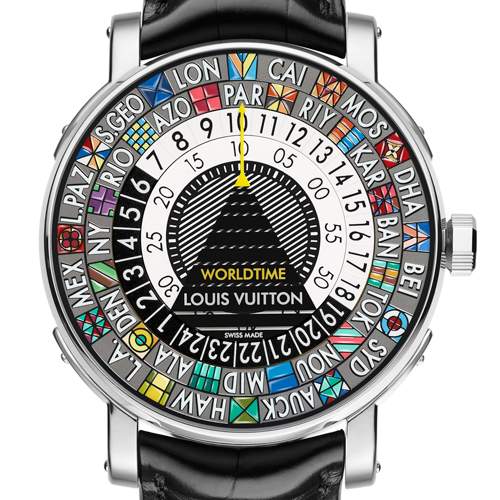 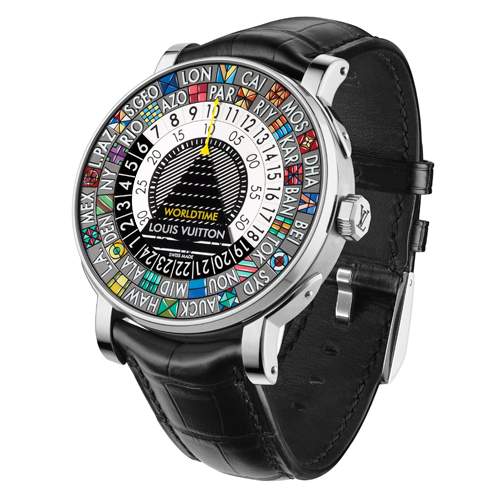 The name Louis Vuitton is almost synonymous with an invitation to travel. The famous flat trunk and its various models created by the eponymous founder are still essential accessories for those wishing to travel the world with elegance and sophistication.

The Escale Worldtime watch is perpetuating this tradition and drawing on the history of the company to reinvent the distinctive features of the travel watch.

The new Escale Worldtime watch is perpetuating this tradition.

At a time when borders are becoming increasingly blurred, Louis Vuitton is proposing an original interpretation of the “Worldtime” function which will appeal to globe-trotters and businessmen in search of fine, exclusive timepieces.

A case with a historical past

The totally new case made from polished, white gold with a satin finish gives the impression that it has always existed. This is a prerogative of these creations whose elegant, timeless design has been carefully thought out. The case features corner pieces which are reminiscent of Vuitton trunks, transformed into horns which protect the case to fulfil their original purpose, like a miniature round trunk containing a precious calibre.

The watch fits perfectly around the wrist with its 41 mm diameter and thickness of 9.75 mm. The fine bezel produces a particularly open dial creating a clarity which is consistent with the “Worldtime” function. The reverse side of the timepiece also reflects its excellent quality: the sapphire back reveals an aluminium disc coupled with an oscillating weight which rotates around a large LV in frosted glass.

A dial in world colours

Louis Vuitton has always offered clients the possibility of customising their trunks with strips of colour, initials, coats of arms and other hand-painted geometric pictograms.

This colourful universe and striking customisations have served as inspiration for the creation of the dial of the Escale Worldtime watch.

It takes the craftsman 50 hours to complete a dial in the workshop dedicated specifically to this task within the La Fabrique du Temps Louis Vuitton manufacture using miniature painting techniques and working with oil paint. Over 30 colours are applied one by one with a paintbrush using tiny, successive strokes before the piece is dried in an oven heated to 100 °C.

The result, which is captivating in the brightness, relief and contrasts created, is magnified further by the visual effect separating the glass from the dial. This is why the black triangle topped with a yellow arrow (the only fixed element on the dial indicating the time and city of reference) is applied directly underneath the glass to prevent it from restricting the movement of the mobile discs.

The dial consists of three separate mobile discs. They can be adjusted by means of the single crown and are synchronised by an automatic calibre, which is developed and assembled by the La Fabrique du Temps Louis Vuitton manufacture.

– The large exterior double-layered coloured disc comprises the initials of cities. It can be rotated to adjust to the reference city which should be positioned at 12 o’clock or above the yellow arrow.

– The central disc, which is constantly rotating, is divided into two black and white semi-circles to distinguish between day and night.

– The smallest disc in the centre is also constantly rotating and comprises numbers corresponding to the minutes highlighted by a precise, contrasting minute circle.

The “Worldtime” indication without an with no hand is a first in watchmaking design which has been developed by the master watchmakers of the La Fabrique du Temps Louis Vuitton manufacture. This is also in a sense the quintessence of a complication which makes it possible to tell the time instantly in the 24 time zones defined by Sir Stanford Fleming and confirmed by the International Meridian Conference held in Washington in October 1884 establishing Greenwich as the “zero” meridian.

With the Escale Worldtime watch it is possible to determine the time in the zone represented by a particular city simply by glancing at the corresponding initials. The minutes can be read underneath the yellow arrow indicating the hour in the reference city.

With its hand-stitched black alligator strap with a white gold buckle, the Louis Vuitton Escale Worldtime watch is a highly original timepiece. As well as proposing a new mechanical interpretation of the complex “Worldtime” mechanism, it also and above all offers a colourful, attractive presentation which will appeal to those who love to combine lifestyle with a love of travel.