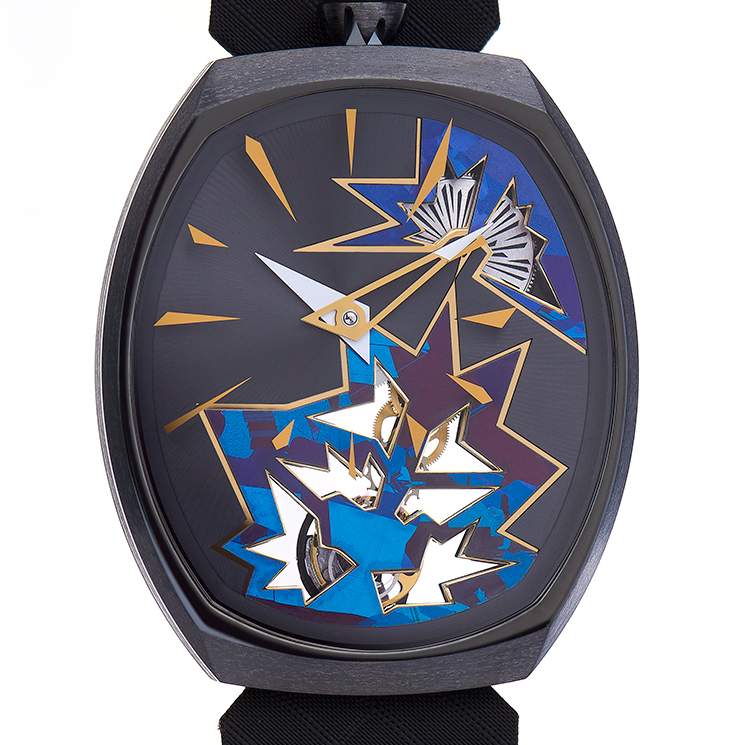 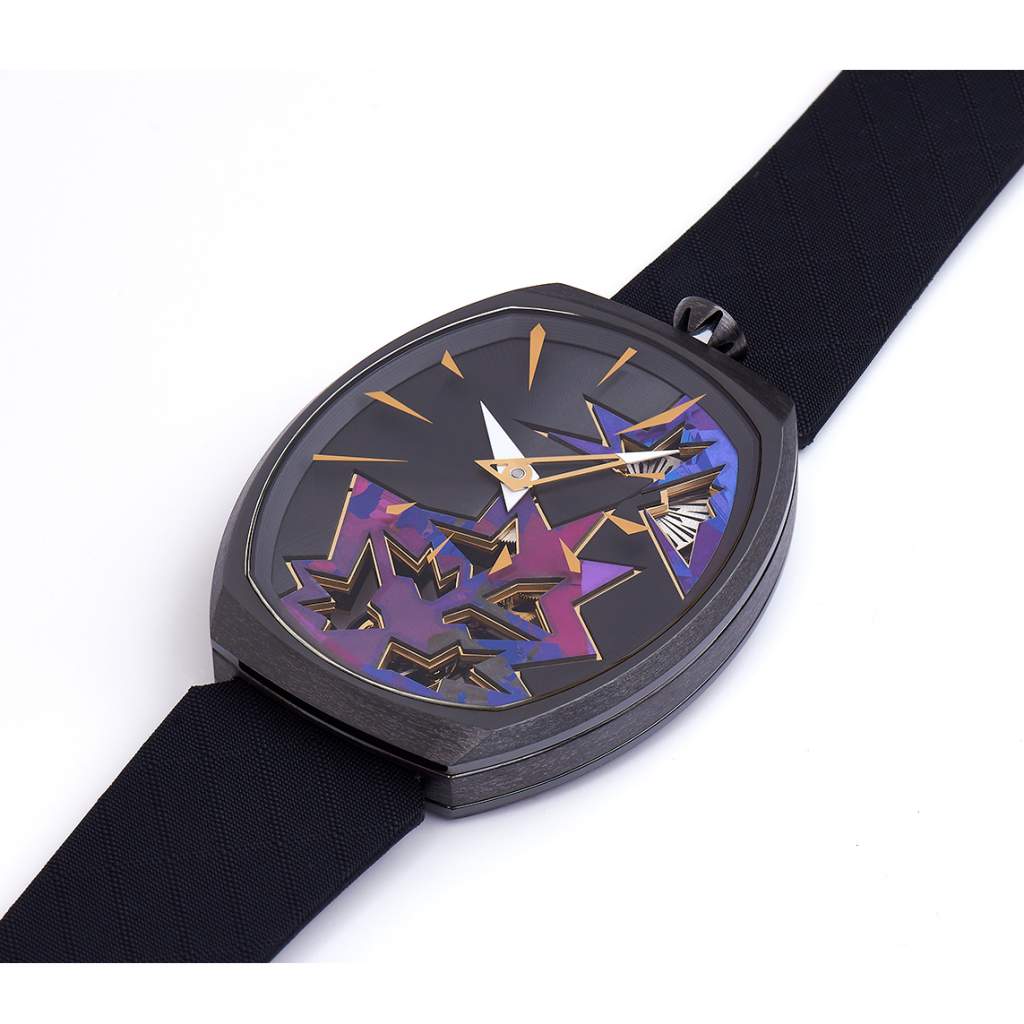 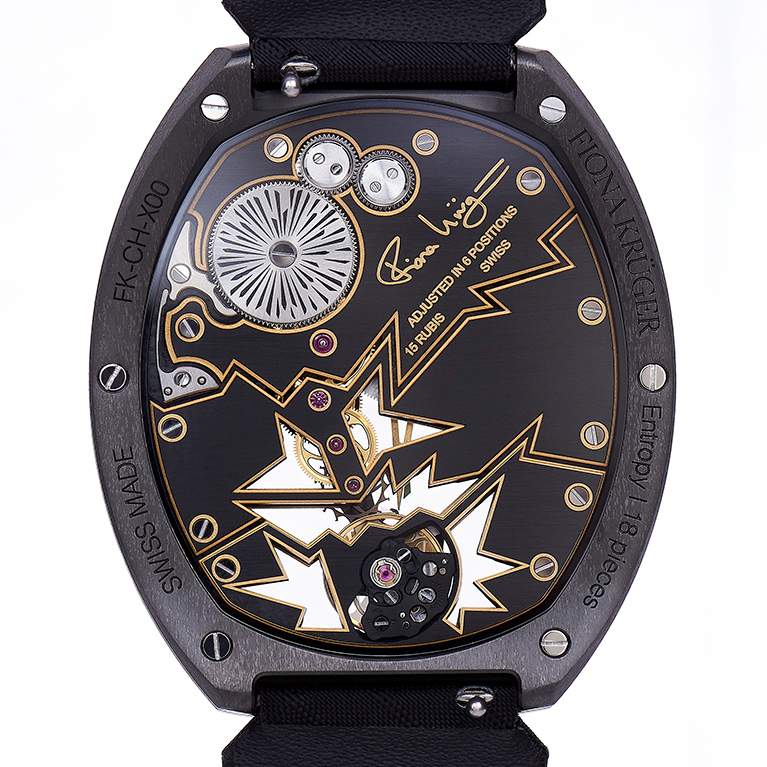 An explosive new offering from the Chaos Collection

Entropy I is the second offering from the Chaos collection. This graphic timepieces in Purple “Pow” is limited to 18 pieces.

The design of the partly-skeletonised dial reveals the most dynamic elements of the brand’s bespoke Chaos caliber beneath, integrating the mechanism into the aesthetic of the watch face. Glinting silicium bursts around the exposed balance wheel and main spring barrel, contrasted by a crisp polished outline. The remaining dial elements have a sun brushed finish, streaming outwards from the centre of the shard hands. Exploding hour markers on the underside of the sapphire indicate the time. These metallic fragments add to the feeling of depth as the explosion makes its way up through the watch. The titanium case acts as a thin frame around the intricate watch, with generous openings at the front and back to reveal as much of the movement as possible.

Launched in June 2018, Fiona’s second collection of timepieces is inspired by the laws of physics which dictate that, as time passes, things always move from a state of order towards a state of disorder or chaos, and never the reverse. This explains why your spilled milk will not unspill, or that glass you smashed will not un-smash (though if you ask a physicist they may argue that if you wait long enough, that smashed glass will come back together – but we’ll let them wait for that!).

This idea lead to the development of the brand’s own Chaos movement, produced exclusively with Geneva based movement specialists, Agenhor, and showcased in Fiona’s first series of watches for this collection.

The gear train stretches out the length of the mechanism, displaying each wheel on the path towards the erupting balance wheel. The shattered hour and minute wheels have been pushed off-centre and the bursting barrel of the mainspring is visible through the exploding main plate and bridges in the top right of the movement. As you wind up your watch the barrel turns, animating the eruption. Each distinctive section of the beautifully finished movement is delicately framed by various size explosions, building up in layers from the movement’s bridges to the main-plate. The plates and bridges of the two-tone movement have a brushed finish with a black PVD coating, while the openings and the larger surface explosion on the font of the movement were created with laser technology and a galvanic colouring process in gold.

The multi-layer dials are partly skeletonised to reveal specific components of the Chaos movement beneath, integrating the mechanism into the aesthetic of the watch face. They are comprised of 5 parts spread over two levels:

Level 1: Polished base plate with openings for the balance wheel, escapement and barrel of the main spring.

Level 2: 2 sun-brushed elements with coloured finishing (anthracite, blue or black depending on the design), and 2 cut out silicium explosions which are positioned around the openings in the dial (in black, blue or purple colour, depending on the design). The gap left between these level two elements reveals a graphic line of the polished base-plate acting as a crisp outline around the silicium.

Polished shard hour and minute hands hover above the movement: a large white lacquer hand indicates the hours, and a skeletonized hand with lacquer detail indicates the minutes. Metallic fragments on the underside of the sapphire mark the hours. These floating indices add to the feeling of depth.

The 3-part watchcase acts as a subtle frame around the intricate movement. Its deceptively simple form follows the shape of the movement itself, with its crown at 12h the only symmetrical element to this otherwise unconventional watch. The case and crown have a mix of brushed and polished finishes, highlighting every angle and facet of their design

Mechanical Entropy is named after the concept of entropy used in physics to explain the second law of Thermodynamics, and subsequently the passing of time.

Lack of order or predictability; gradual decline into disorder

Everyone has an intuitive understanding that time moves forward, that broken glass will not un-shatter, spilled milk will not un-spill. The scientific explanation of this is a concept called entropy, which explains that things always go from a state of order towards a state of disorder or chaos, but never the reverse. This is how we know time only moves forward (aka: the arrow of time).

Of course, if you delve deeper into the world of physics, we discover that one day your spilled milk may just un-spill – but we’ll leave that to the physicists to deal with!