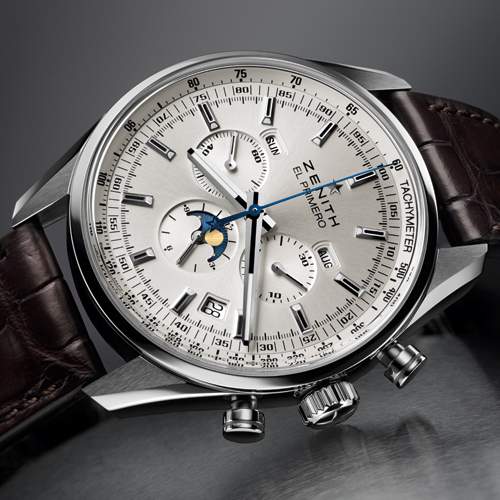 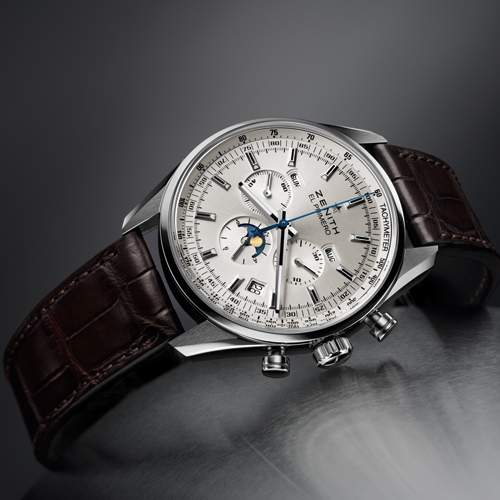 A movement well-known to collectors beats at the heart of the latest Zenith watch: Calibre 410. Created in 1969 as a variation of the legendary El Primero, it combines the performances of the world’s most accurate automatic chronograph with triple calendar and moonphase indications. Steadily perpetuated over the years, it now appears in a form bridging past and present, orchestrated around a display loyal to the historical model, while the case displays resolutely contemporary lines.

While one man took a small step that proved a giant leap for mankind by walking on the moon, Zenith did much the same for watchmaking that same year. After seven years of research, the Manufacture presented El Primero, the first ever integrated automatic chronograph, also equipped with a date and a tachometric scale. It was already an impressive feat in itself, backed by exceptional precision since the calibre beat at the exceptional speed of 36,000 vibrations an hour, corresponding to 1/10th of a second precision. That same year, buoyed by the daring that has guided its steps since its founding in 1865, as confirmed by the over 300 patents registered to date, the Manufacture Zenith further rolled back the boundaries of its art by equipping its calibre – that had become an instant watch industry icon – with triple calendar and moonphase indications. The name of this movement also born in 1969 was the El Primero 3019 PHF, later referenced as 410. Built around a column wheel and endowed with a 50-hour power reserve, like all the El Primero movements that would punctuate the Zenith collections, Calibre 410 made its way through the decades until the year 2000 thanks to remarkable reliability coupled with extraordinary precision.

Almost half a century after its creation, El Primero Calibre 410 has evolved in various ways, including having a complete model named after it and finding its way back into the legendary El Primero collection. Introduced this year with a silver-toned dial, it reproduces the original function layout in a distinctively 1970s spirit. The days and months are counted off at 10 and 2 o'clock respectively, while the date remains imperturbably enthroned between 4 and 5 o’clock. Merging into the hour subdial at 6 o’clock, the moonphase depicts the revolutions of the night star through a special-shaped aperture with two rounded cut-outs reproducing the dark part of the moon. The latter thus reveals its successive phases – and faces – throughout its cycle (waxing moon, full moon, waning moon, new moon). The disc bearing two moons is driven by a 59-toothed wheel corresponding to two lunar cycles (2 x 29.5 days). This is a model that reinvents the subtlety of the moonphase function by combining technique with poetry.

The Manufacture-made complications of El Primero Calibre 410 are fairly classic, yet nonetheless rare. While Zenith wished to preserve the authentic character of an icon 20th century icon, it has succeeded in infusing it with “that little something extra” that imparts a modern touch and makes it truly unique. Appearing in a contemporary 42 mm size, the steel case displays decidedly on-trend curves with alternating polished and brushed finishes. The round chronograph pushpieces proclaim their originality, while the snailed counters create a subtle contrast with the sunray dial motif. Rimmed by the tachometric scale on the opaline inner bezel ring, the rhodium hour-markers stand out clearly to ensure perfect readability, while the Zenith star on the tip of the blue central chronograph seconds hand flies around the dial as if to underscore its prestigious kinship with the world’s most accurate series-made chronograph. The beating pulse of an authentic Manufacture model driven by the daring spirit of the one that will forever remain “the first”, the El Primero Calibre 410 reveals its fascinating 390-part mechanism through the sapphire crystal case-back. It brings to the wrist the unique pleasure of owning an icon.