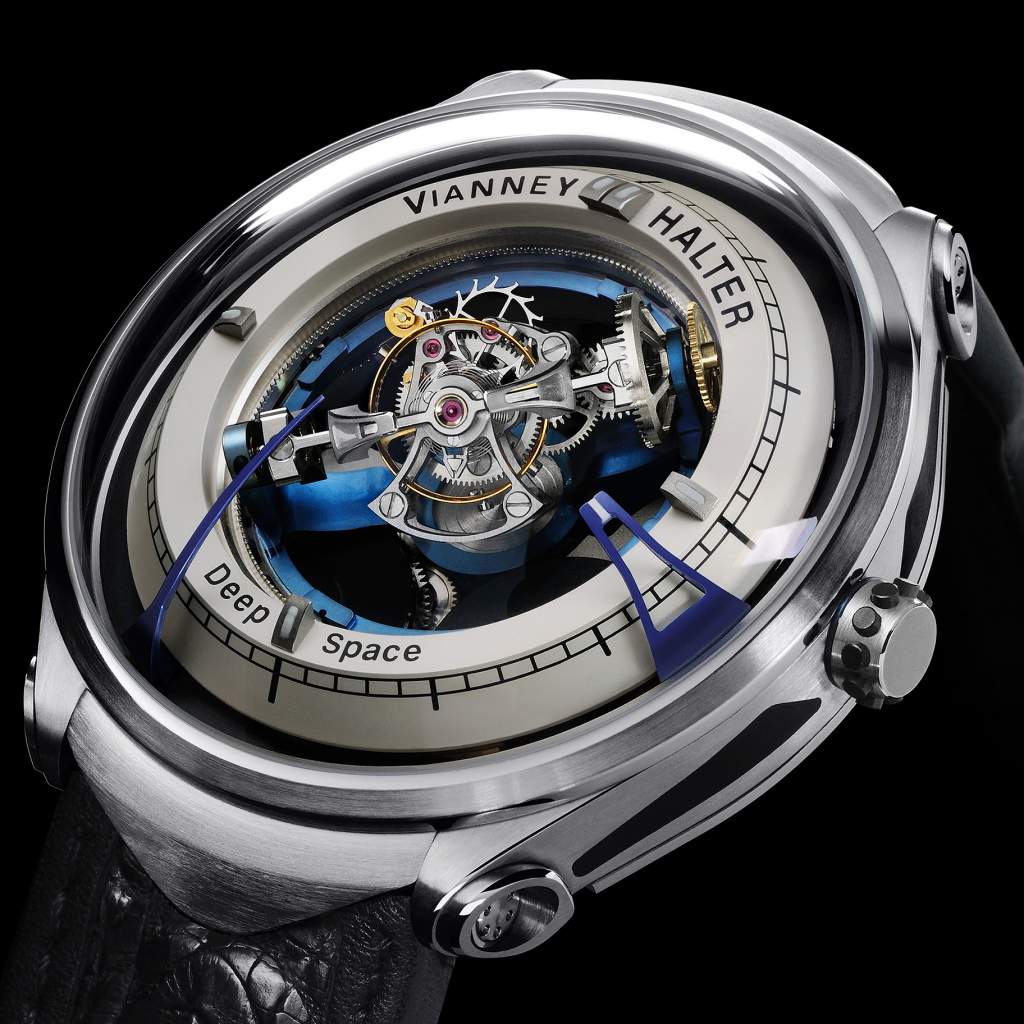 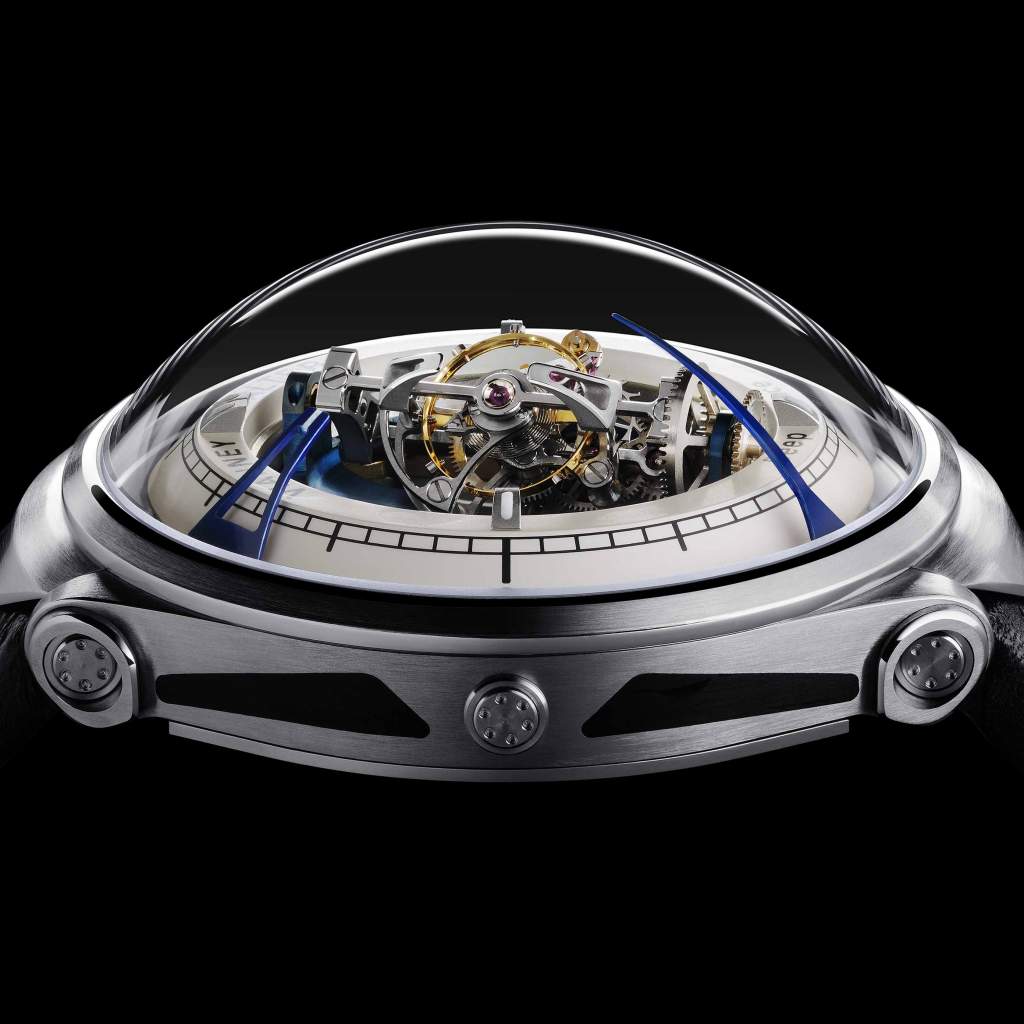 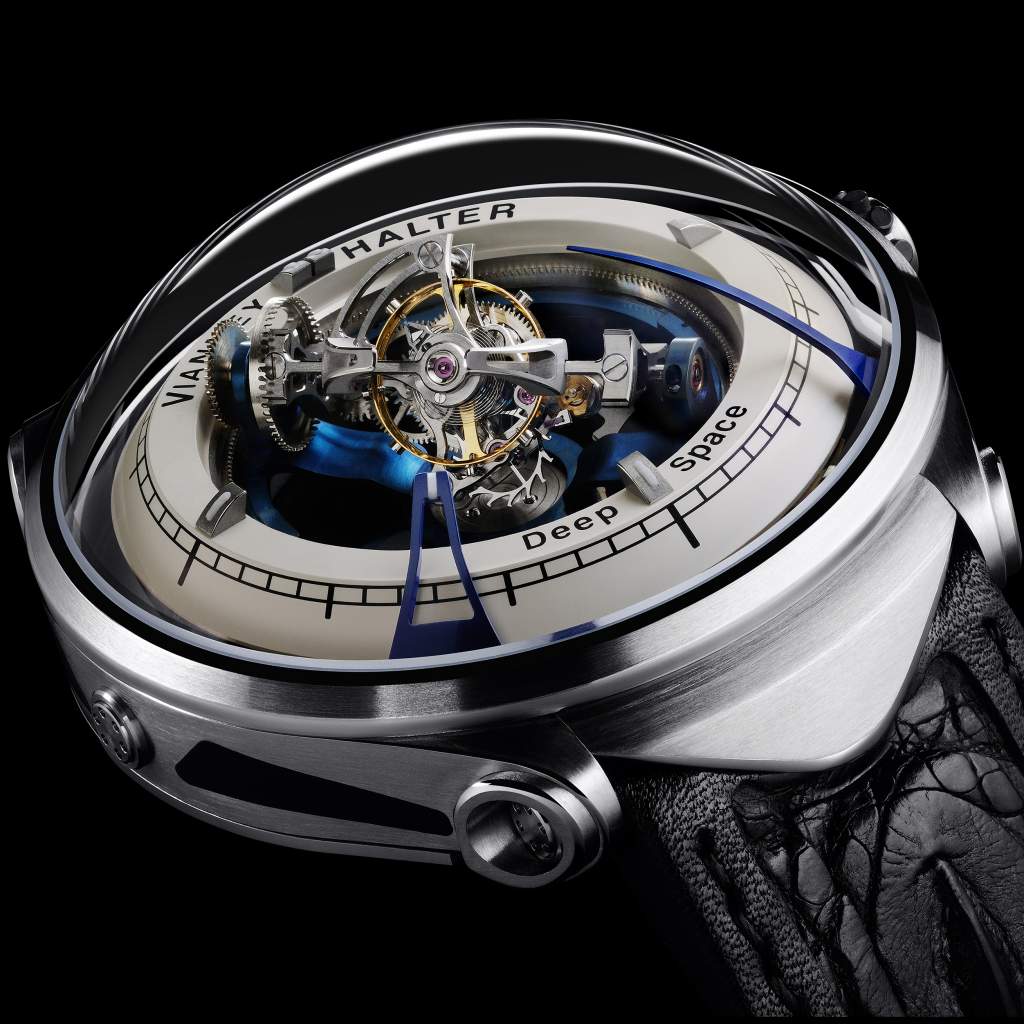 After a 6 year long creative pause, Vianney Halter has presented on the 6th of june 2013 his last creation.

Breaking down with his previous collections, he wanted to renew his style. However, he started on the same basis that inspired him his very first watch, the Antiqua.

Actually, he sought to find another descendant of the marine chronometers. He wondered what could be the ultimate time instrument that should be taken onboard an exploration ship, not a sea vessel however, but a outer space ship.

The result of this is a wristwatch that he has named DEEP SPACE TOURBILLON.

Today, he submits his DEEP SPACE TOURBILLON to the assessment of the Grand Prix d’Horlogerie de Genève 2013 Jury in the « Innovation » category.

Until now, only automatic space probes have crossed the ultimate limits of our solar system but soon inhabited spacecrafts will make real the space trips imagined by writers and movie makers.

Space is the final frontier and that cannot do anything but triggering watchmaker’s imagination.

Marine chronometers and explorations of seas

Explorers of the XVIIth century used to take onboard vessels marine chronometers.

These were of the utmost importance as they were necessary to calculate the location – in longitude - of the vessel at sea.

The method consisted in comparing the local time - as it could be deducted from measuring the height of the sun in the sky – to the time of the departure harbour – as it can be read on the dial of the onboard chronometer.

In the XVIIth and XVIIIth centuries, those in power in United Kingdom or France organized incentives for innovations and prized inventors that would improve onboard timekeeping and methods of longitude calculation.

This resulted in developing and making of marine chronometers that was one of the passions of young Vianney Halter.

These antique instruments were a source of inspiration when he designed his Antiqua Perpetual Calendar, presented in 1998 as the first timepiece branded “Vianney Halter”.

They were the ultimate link between the crew at sea and the people that stayed at land.

In space, due to low gravity, there is no more top, no more down, no more depth.

In outer space the sun has become a star like any other and the Earth in an invisible mass of rocks.

There is no daylight nor night shade.

There is only the infinity of surrounding universe, a deep dark black sky pitted by trillions and trillions of motionless stars.

Even more, the link with Earth is slackened as the radio communications with the control centers take hours or days to reach spaceships hurtling through the cosmos.

A human being in space is lost as were lost sailors at sea.

A time instrument for explorations of outer space

For Vianney Halter the recurrent question was : what is the ultimate time instrument that a human being shall take with him for his trip in outer space ?

Considering this, Vianney Halter has imagined a wristwatch that would be likely to remind the man in space the four dimensions (length, height, breadth and time) that are his frame of reference while on Earth.

Rather than a scientific instrument, this watch is an philosophical artifact that maintains the link between the crew of a spacecraft and the mankind that has sent them as explorers and ambassadors.

The result of this reflexion is a wristwatch that not only displays the time, but also describes the motion in every dimension of space.

At first sight, Deep Space Tourbillon plunges you in a strangely familiar world : a mix of futuristic visions from Sci-Fi and present pictures from space exploration.

A sapphire dome surmounts a round shaped titanium case and houses a big triple axis tourbillon implemented in the centre of the watch.

The latter is surrounded by a index ring with a surprisingly classical “chemin de fer” graduation.

Two curved blued steel hands lean out of the watch periphery and spread above the tourbillon.

The whole is breathtaking, certainly,  but the tourbillon in motion is mesmerizing.

The tourbillon cage - that contains the balance wheel, the anchor  and the escape wheel - rotates in only 40 sec. Here is the 1st axis.

Its is installed inside a ultralight structure that rotates in 6 min around a 2nd axis which is perpendicular to the one of the tourbillon cage.

The whole set is suspended in a craddle that turns in the plane of the watch mainplate in 30 min. This is the 3rd axis.

Due to these desynchronized revolution speeds, the tourbillon moves in a never-ending ballet, showing second after second a different point of view onto the graceful mechanism.

Nothing chronometric in these various durations of revolutions. It is rather philosophical : each dimension (axis) has its own rhythm, its own time.

Time is represented by the hour and minutes hands which surround the triple axis tourbillon.

This achieves the 4-dimension-space representation envisionned and wanted by Vianney Halter for the deep space voyager.

Memories from a future time

A strange feeling emanates from this watch. A kind of déjà vu experience.

Subliminal images come in mind : Neil Armstrong’s helmet on July 1969, HAL 9000 enigmatic eye from “2001, a space odyssey”, the greenhouse domes from “Silent running”,  the soviet Lunokhod automatic exploration module, the rotating antenna of Robby the Robot from “Forbidden Planet”, the Deep Space 9 station from “Star Trek“ .... and many others.

Nothing surprising as scientific matters as well as Sci Fi movies and novels are Halter’s favourite universe and among his sources of inspiration.

However, Deep Space Tourbillon is not a servile copy of an accessory from the movie industry, or - worst - a indigestible mix of details harvested here, there and everywhere. It is rather a subtle potpourri made of the various cultural influences that Vianney Halter is sensitive to. These have been translated into a genuine timepiece, thanks to the experience, the rigour and the work of a genuine watchmaker.

Deep Space Tourbillon features an invention that was invented more than 200 years ago and therefore it now belongs to the traditional horology.

However, Vianney Halter has designed a sophisticated version of this as his tourbillon swirls around 3 axis and is implemented in the centre of the caliber – which is a world premiere.

Moreover, the rotation around the third axis is possible thanks to an open cradle rather than a closed cage, which makes the show as much visible as possible.

For this purpose, the cradle is supported on only one side by means of a ball bearing. This device is covered by a patent currently pending.

“A fantastic trip beyond the infinite”
(credit : 2001, a space odyssey by Stanley Kubrick)

As Vianney Halter said in his speech during the Grand Prix d’Horlogerie de Genève 2011 :
“Watchmaking is an exploration journey”

He started his journey with the Antiqua, inspired by marine chronometers of the XVIIIth century. He continues his trip « beyond the infinite » with this watch.

Deep Space Tourbillon is his new - and definitely not his last - contribution to the contemporary art of watchmaking.