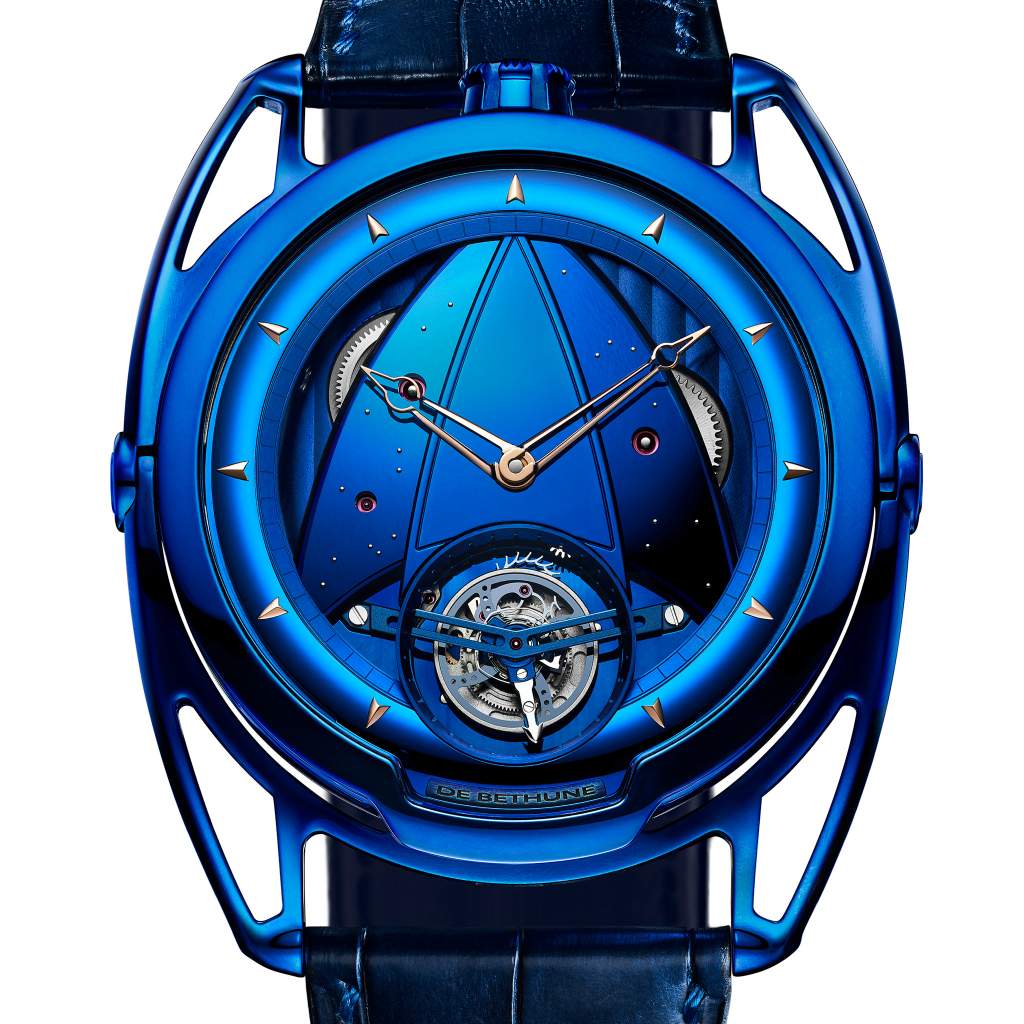 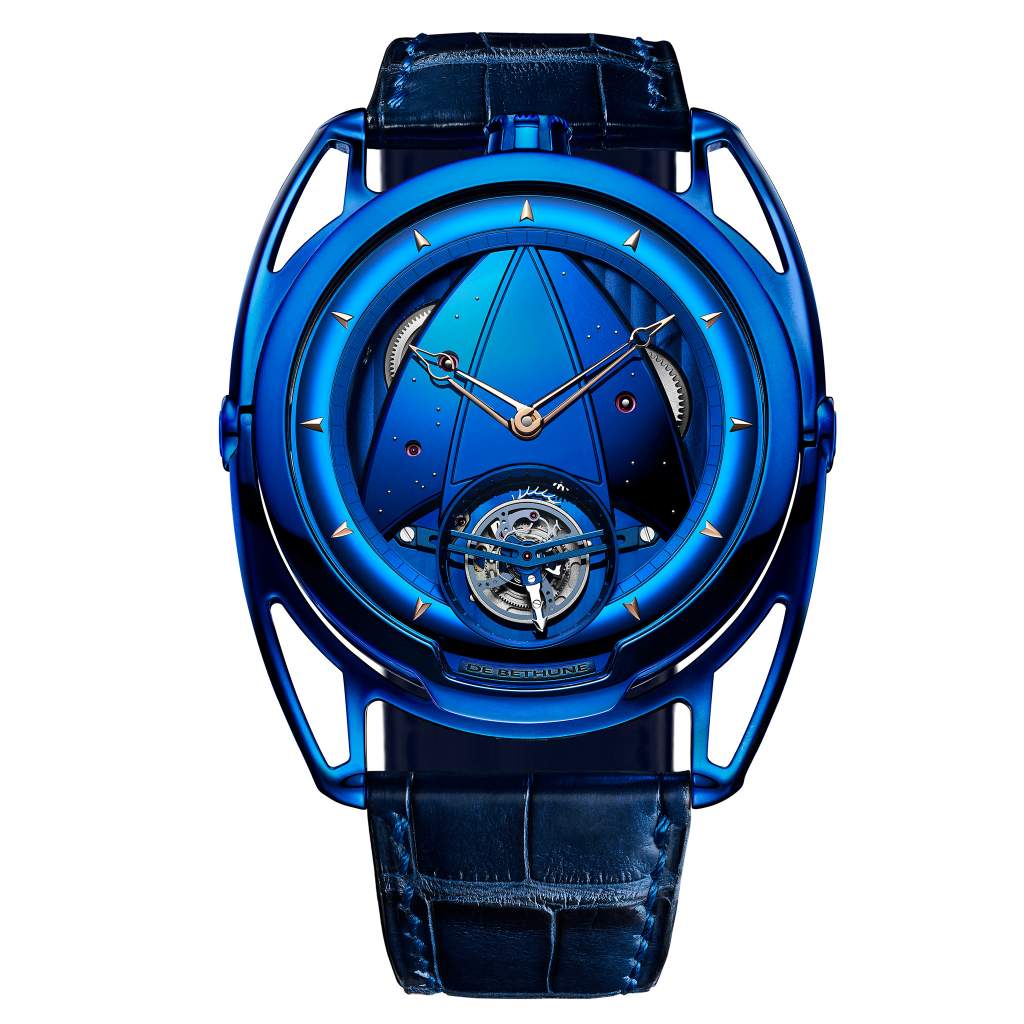 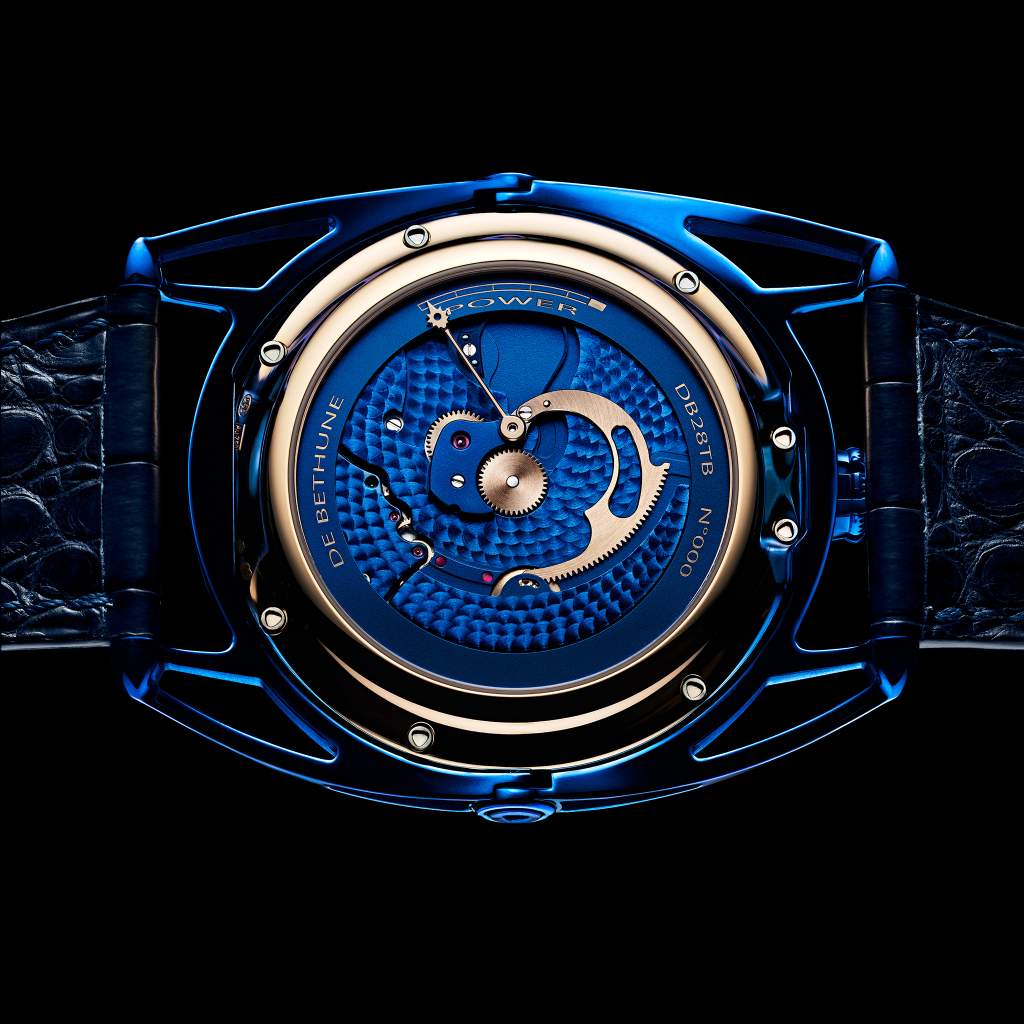 In honour of the colour blue, a fundamental element of its identity, De Bethune presents a monochromatic range of its iconic models, DB28 Tourbillon. Radical and magnetic, its colour is created by an artisanal and natural treatment of the metals.

De Bethune has devoted considerable research into natural blue, because the brand considers this colour to be symbolically related to the concept of infinity and harmony.

Blue is also associated with the notion of plenitude: within and beyond itself, and as far as this unfathomable infinity that is the universe, the source of life. So blue becomes a vector that subtly connects mankind with his physical and his spiritual environment. Seen in the context of artistic expression, the concept of blue approaches the magic of music, which is the inspiration for the name given to this creation.

To create its own blue, De Bethune relied exclusively on a traditional technique, and all the parts in titanium and steel used in Kind of Blue were treated in this manner. It consists of heating the material to colour its surface through oxidation and to modify its physical properties in the process. Since its invention at the beginning of the 16th century, the technique has been used by watchmakers to give a new lustre to watch parts without altering their finishings. It also provides protection against corrosion. The synonym of watchmaking excellence, it requires a preliminary fine polishing, followed by a heating phase, normally by flame, to create a natural and long-lasting protective film, at the same time as it increases the hardness of the piece. Steel and iron were the only materials treated in this manner until De Bethune began its own experiments with titanium. Finalised in 2006, the technique is now applied to the purest form of this material, grade 5 titanium. Entirely done by hand, this extremely demanding treatment involves the development of a whole new repertory of steps, because titanium has proven to be a very arduous material to remodel. To give it its definitive lustre, the artisans at De Bethune have to demonstrate exceptional tenacity with each piece they work on.

The thermal treatment for Kind of Blue is applied not only to the elements of the case, but also to most of the parts of the movement. Thus, each part is studied individually, as the process has to be adapted according to its form and its mass. This preliminary phase is essential to ensure a uniform range of tones in the finished product. However, the human touch and the different typologies of the materials result in very subtle variations. These nuances are essential for De Bethune, because they create a visual resonance that affects the appearance of the finished piece. Actually, the definitive colour comes from the sum of all these variations and it is expressed by a kind of overall vibration.

The DB28T adopts a case in polished and blued titanium held by floating lugs for maximum comfort. Their springs indeed follow the shape of the wrist and its movements.

Its mechanical calibre with hand winding is equipped with a high frequency, ultra fast tourbillon, signed De Bethune. The lightest in the world with its minuscule 0.20 grammes for 63 parts, it beats at one-tenth of a second and makes a complete rotation in 30 seconds for superior chronometry. Its silicon balance wheel, just as its escape wheel, is encircled with a white gold ring. Its flat terminal curve, placed on the same level as the balance-spring, compensates for off-centering and facilitates its fastening. A self-regulating twin barrel developed in-house ensures constant torque in the movement.  Entirely visible, the movement presents a curved delta motion work bridge in polished and blued titanium decorated with applied microsphere stars in white gold.

Decorated by hand, the parts present various types of high watchmaking finishes, with rose-work grinding on the barrel ratchets and on the back, a plate with “De Bethune” concentric graining. The hours are marked by arrow pointers in pink gold, and as an added touch of luxury, indicated by skeleton hands also fashioned in pink gold.

At once supreme and delicate, the Kind of Blue DB28T emits a singular radiance from the very material from which it is made. It truly advocates in favour of a colour that casts a magical spell.