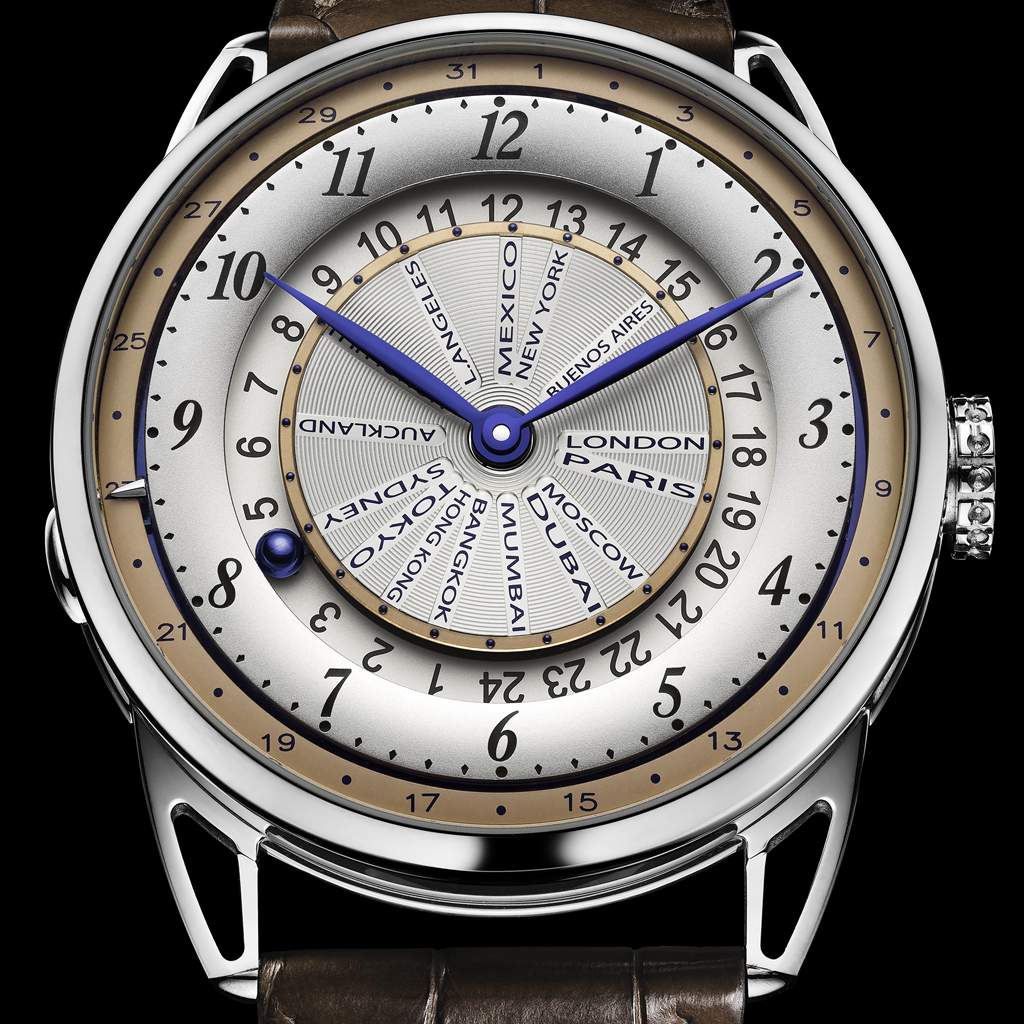 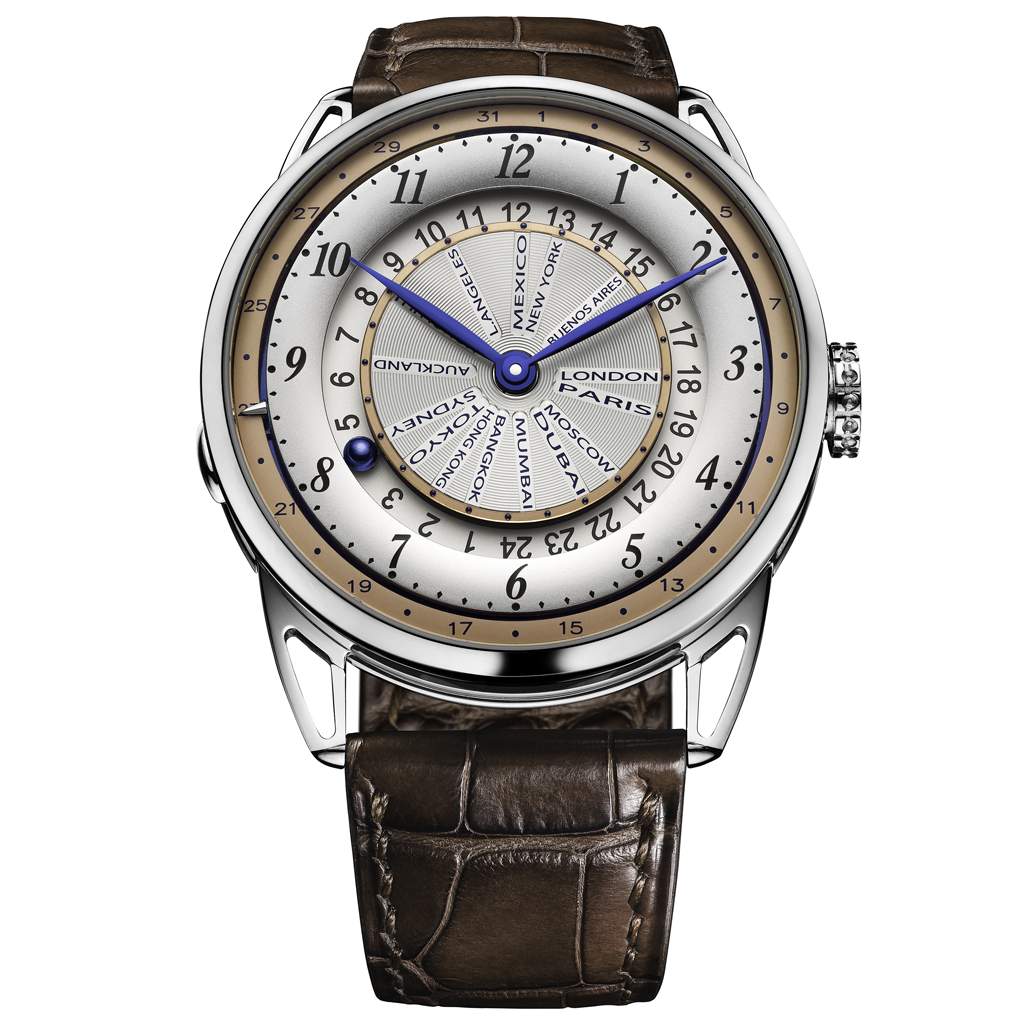 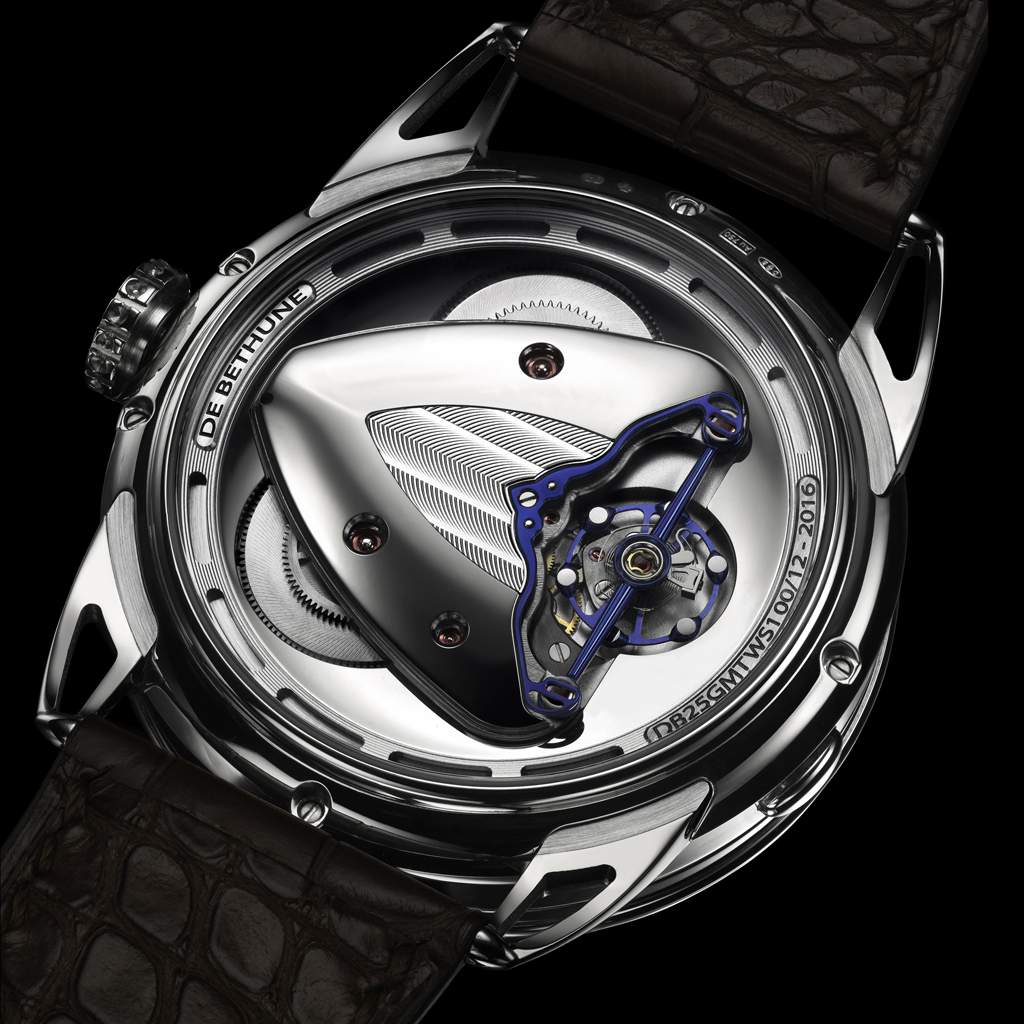 De Bethune presents the DB25 World Traveller, an intelligent watch featuring a second time zone and world time expressed with a mysterious display. The exceptional ease of use and convenient systems for setting and display make this timepiece a world première.

The DB25 World Traveller is designed to become a loyal companion for the long-distance traveller. Although the invention of multiple time zones dates back to the 17th century, the readability and adjustment of the functions on a wristwatch have never been so simple and intuitive. The system is completely secure and each indication can be controlled independently. Once again, De Bethune stands out from the pack by inventing a timepiece that is simple in appearance but conceals a gem of technical intelligence.

Visually, the refinement of the DB25 World Traveller lies in the concentric arrangement of the functions. World times appear on a disc in the centre of the dial, encircled by a graduated channel in which a moving microsphere indicates the reference time – also known as the home time. This microsphere, a technical signature of De Bethune since their invention of the three-dimensional moon-phase, has two halves that allow it to also indicate day and night. One half is blue, the other pink, and they reverse positions when they pass 6 a.m. and 6 p.m. Local time is displayed on the hour circle, and the day on the last exterior circle.

The DB25 World Traveller is equipped with the mechanical calibre DB2547 with manual winding, the latest manufactured. The morphology, performance and high-quality execution of the calibre illustrate the degree of excellence and the philosophy of technical exploration that are so particular to De Bethune. For the first time, the central delta bridge is embellished with a “Côtes De Bethune" decoration in the centre, produced using the Microlight micrometric engraving technique developed by De Bethune. The polished plate is hollowed out to become concave and thus intensifies the reflections of light as a result. The regulator is equipped with a new evolution, a titanium balance wheel with white gold inserts, developed particularly for optimal management of temperature variations.

The DB25 World Traveller transforms the way that a second time zone can be displayed along with a world time indicator. True to the De Bethune approach that focuses first and foremost on the reason behind any watchmaking function, David Zanetta and Denis Flageollet have aimed to make the display correspond ideally to the traveller's needs. They focused their research on readability and comfort, both in wearing the watch and in manipulating its settings.

Starting in the centre, the dial indicates world time, which is set using an almond-shaped push-piece positioned at 8 o'clock. This flexible and precise system moves the city display disc, which is decorated with concentric Microlight, by one-hour clockwise jumps. The first time zone, or reference time zone, is displayed with 24-hour markers and indicated with a mysterious display by the position of the microsphere, which appears to float weightlessly in its channel. Using the crown, it can be set in both directions (clockwise/anti-clockwise). At 6 a.m. and 6 p.m., the crown pivots on itself to present a pink gold face for daytime, or a back side in blued steel for the night. Local time, or the second time zone, is indicated by the blued leaf-shaped hands, whose curve matches the relief of the dial. The minutes hand remains naturally coordinated with the reference hour, while the hours hand is controlled by the crown pulled out to the second notch. The hours hand moves forward and back by direct jumps of precisely one hour. The day indication is the last circle on this display, with a design that evokes the solar system. The day is coordinated with local time only in the clockwise direction, and indicated by a jumping pointer that is adjusted by a corrector at 10 o'clock.

The generous 45 mm diameter white gold case provides plenty of room for this display. The champagne and silver tones also structure the reading by sequencing the succession of the indications. The alternation of decorations and volumes also enhances readability, for example, with the slightly domed hours ring, which is also highlighted with a powdered effect to intensify the luminosity of the surface.
The case stands above the wrist, like an instrument, with open lugs attached to the case back. This frees up the middle so that it is accessible for easy adjustment. The crown is an essential component of the DB25 World Traveller; designed to be thin but wide and slightly raised for greater ease in handling. It moves on three notches that are distinguished from one another by their markings.

A spirit of technical innovation

The mechanical calibre DB2547 with manual winding in the DB25 World Traveller is the 25th calibre designed, manufactured and assembled in-house by De Bethune. In its own right, it is the result of more than 10 years of knowledge and inventions developed by Denis Flageollet and his team. To achieve this new streamlined display, the movement integrates 430 parts.

Visible through a sapphire case back, the reverse side of the movement reveals a new titanium balance wheel with white gold inserts in the rim. The result of in-depth research and prototypes, the balance wheel has the capacity to neutralise the effects of temperature variations through its interaction with the balance spring, with its "De Bethune" flat terminal curve that ensures concentric development. The aerodynamic shape was also designed to diminish air resistance, an important source of disruption, to the greatest extent possible. True to form, it guarantees perfect balance through all stages from manufacture to assembly. Silicon was chosen for the escapement wheel, due to its light weight and in order to increase the power of the calibre. As for the regulator, it is completely maintained by a triple pare-chute shock-absorbing system exclusive to De Bethune. The system combines a titanium bridge that integrates two jewels that act as support columns on each side. A leaf spring system supported by the jewels holds the system in place. The partially visible twin barrels accumulate five days of power reserve through a patented self-regulating power mechanism.

Other distinctive features: De Bethune finishes its movements so that they reflect as much ambient light as possible. For this reason, the finish on the majority of the components is mirror-polished. A number of them, whether they are steel or titanium, are also blued, reflecting De Bethune's signature colour, as seen here on the bridge and the rim of the balance wheel, as well as on the leaf spring of the triple shock absorber. Rose-work grinding is reserved for the barrel ratchets. An outer ring decorated with grained Microlight and perforated by oblong apertures provides the support for the various indications.