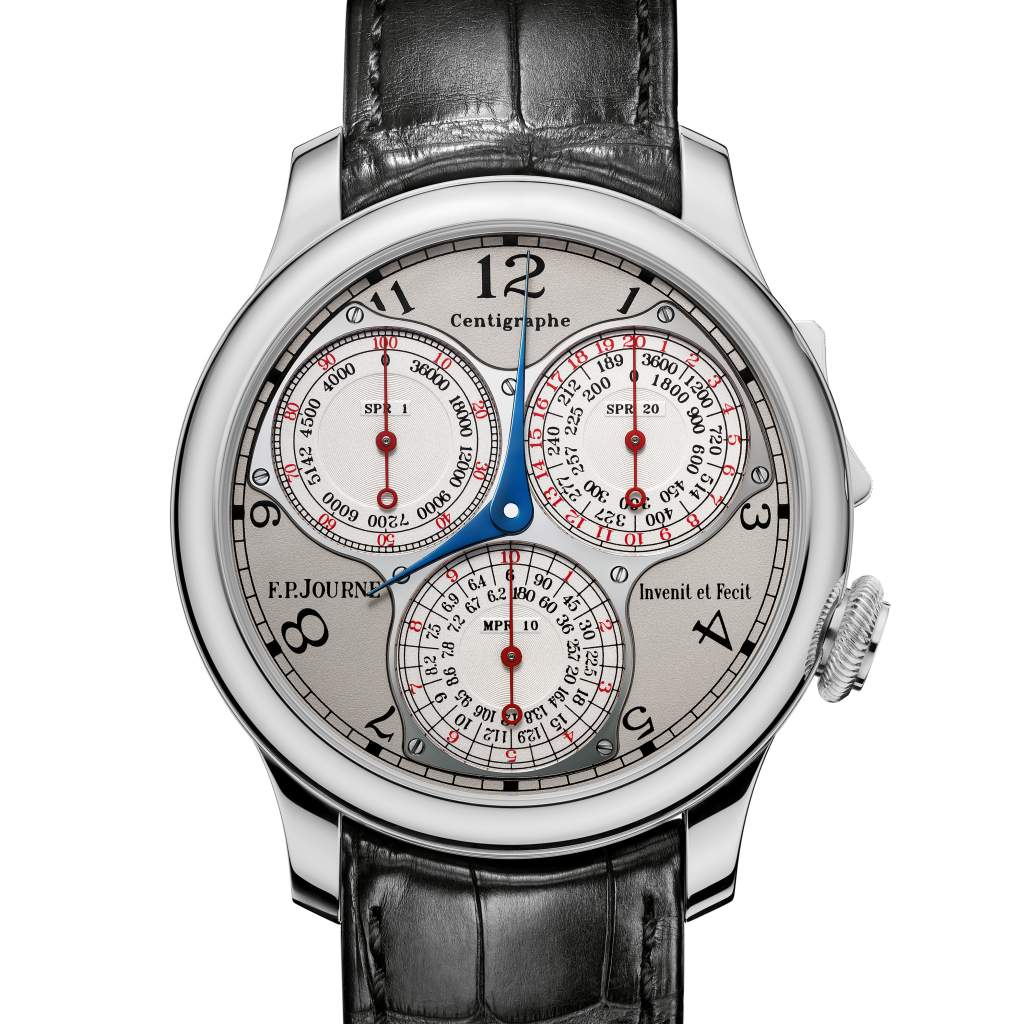 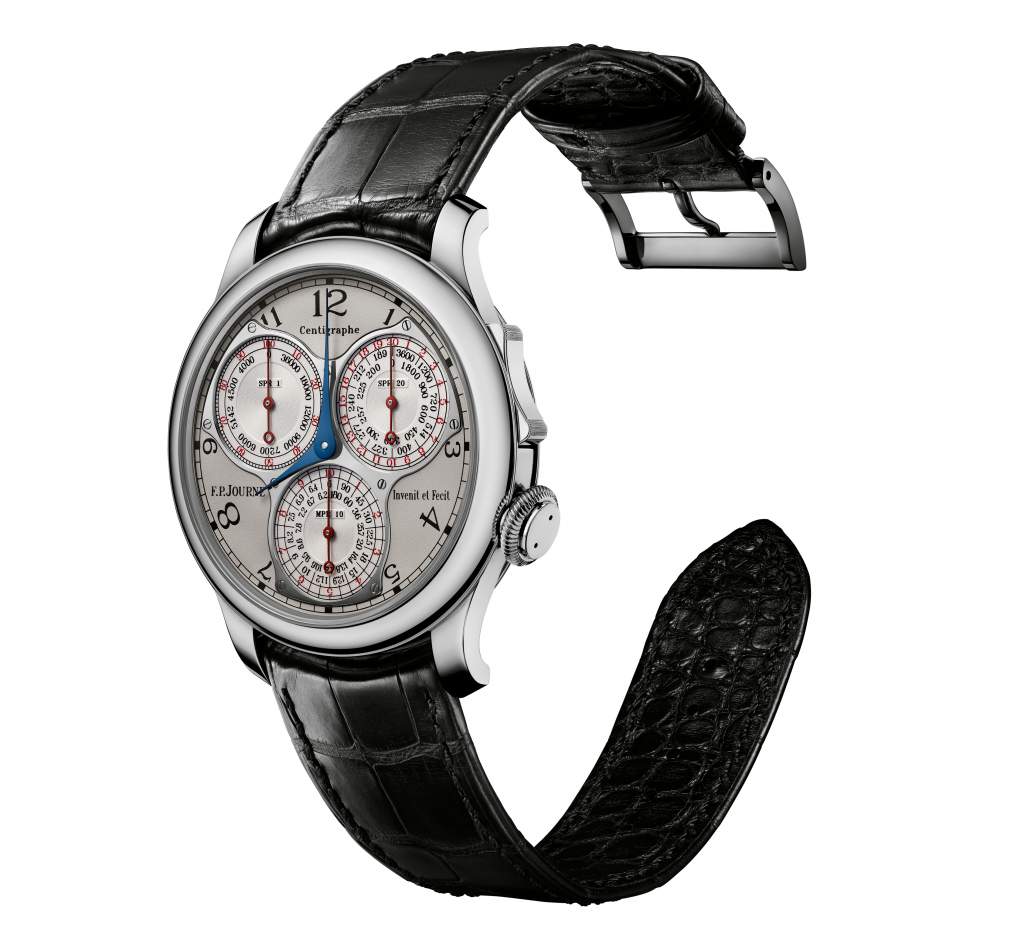 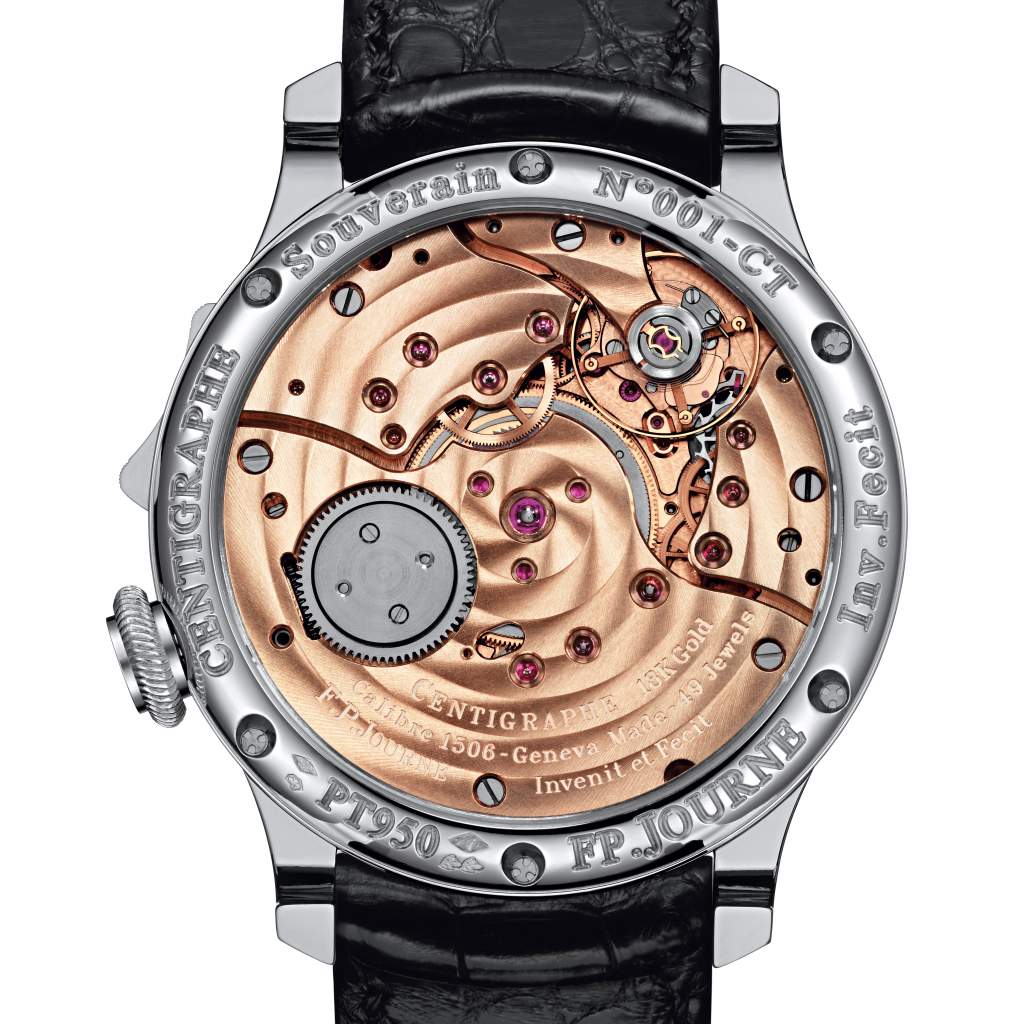 36,000 km/h at your fingertips - the Art to convert 6 km/h in 36,000 km/h - Spectacular new mechanical chronograph unlike any other ever made before.

The hand-wound mechanical movement of the Centigraphe indicates elapsed times from a 100th of a second to 10 minutes, visible on 3 dials, each with a time scale in red and a tachometer scale in black. The tachometer scales convert time units for 1 kilometer into speeds ranging from 6 km/h - walking pace - to 36,000 km/h, well above the escape velocity of a rocket going into low-level orbit (first cosmic speed).

The 100th of a second hand revolves around the dial in one second on a scale marked in hundredths of a second. Theoretically it is possible to time an object moving at 36,000 km/h with the tachometer on the watch face, on which 36,000 is facing the 10 on the 100th of a second scale.

On the dial at 2 o’clock, the hand revolves once every 20 seconds on a time scale divided into seconds. The external tachometer scale indicates speeds.
The third dial, at 6 o’clock, graduated for 10 minutes, has a similar tachometer scale with speeds corresponding to 20-second markers. Thus, for example, a kilometer travelled in 3 minutes 40 seconds represents a speed of 16.4 km/h (to within a decimal).

The chronograph is started, stopped and zeroed by a rocker at 2 o’clock in the case band, instead of the usual buttons on either side of the crown. This ergonomic design, perfectly fitted to the wristwatch, is patented.

A second patent was granted for the mechanism’s ingenious configuration, which effectively isolates the chronograph from the timekeeping function. This means the balance amplitude is unaffected when the chronograph is running.

The hands of the 100th of a second counter, the 20 seconds, and the 10 minutes hand are driven by 2 different wheel trains, themselves driven by the centre of the mainspring (system patented for the Sonnerie Souveraine). Another separate train of wheels, also driven by the barrel arbor, drives the 10-minutes hand.

The Centigraphe Contributes to the Medical Research of the ICM

In purchasing the Centigraphe, you are also supporting the medical research carried out by the ICM - Institute of Brain and spinal Cord - in Paris to help fight brain and spinal cord diseases such as Alzheimer’s, Parkinson’s, and multiple sclerosis…

Along with Professor Gérard Saillant, Luc Besson, Jean Réno, Jean Todt, Michelle Yeoh and Michael Schumacher, amongst others, François-Paul Journe has committed to donating 30% of the profits from the sale of each Centigraphe to the ICM, with no time limit (www.icm-institute.org).