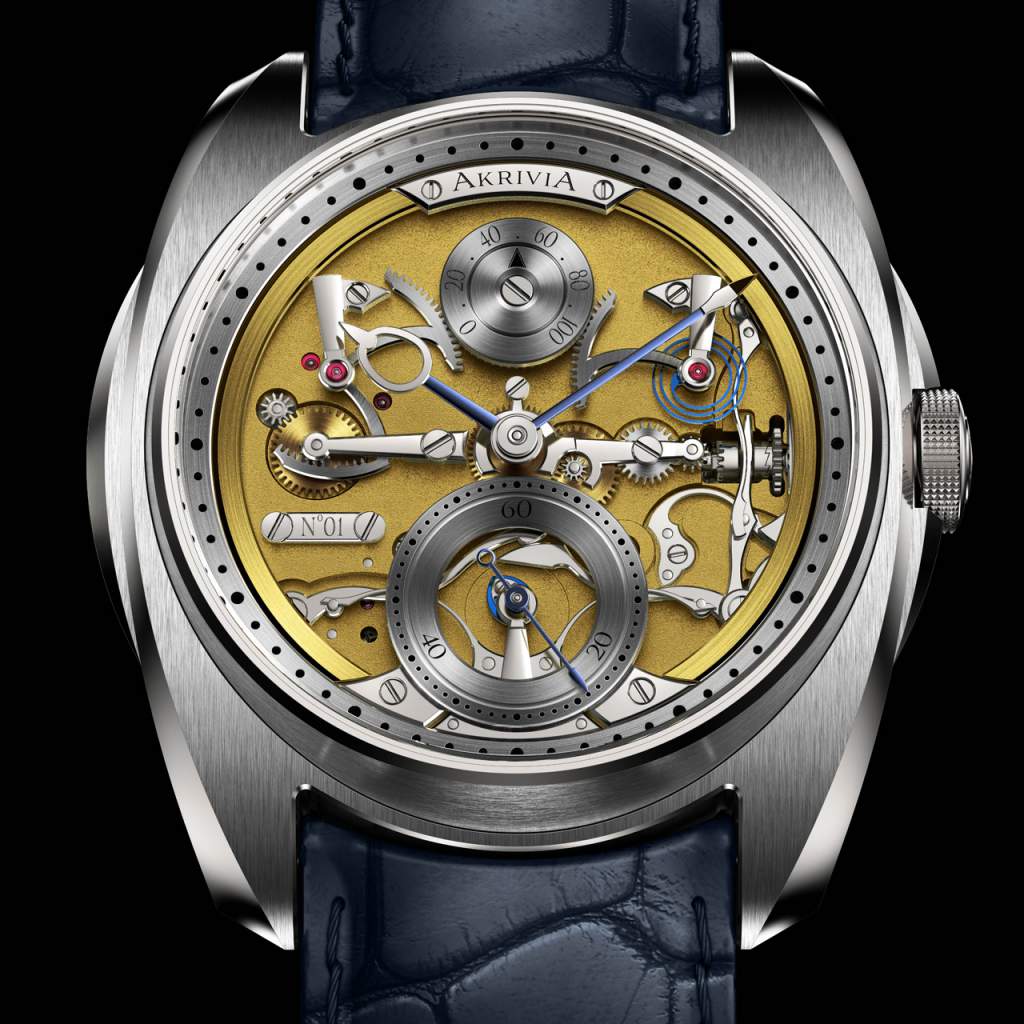 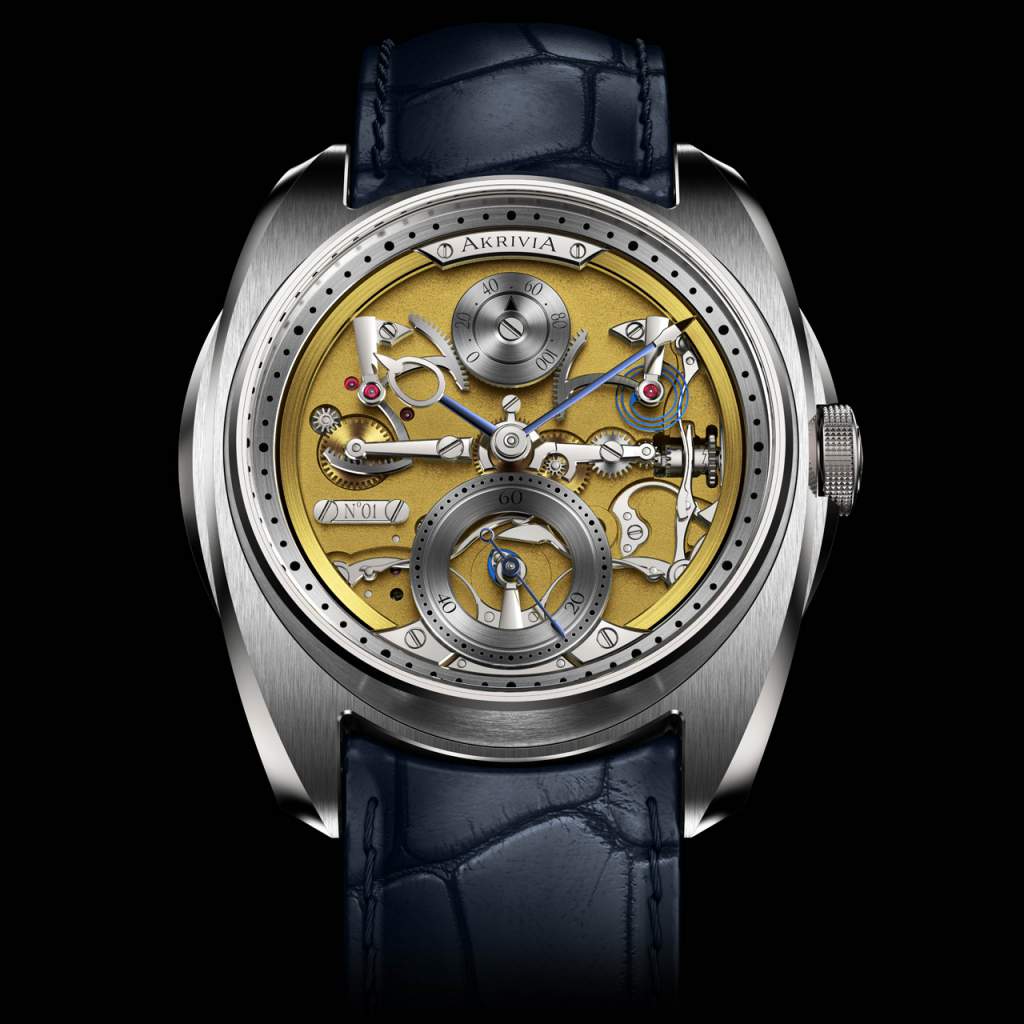 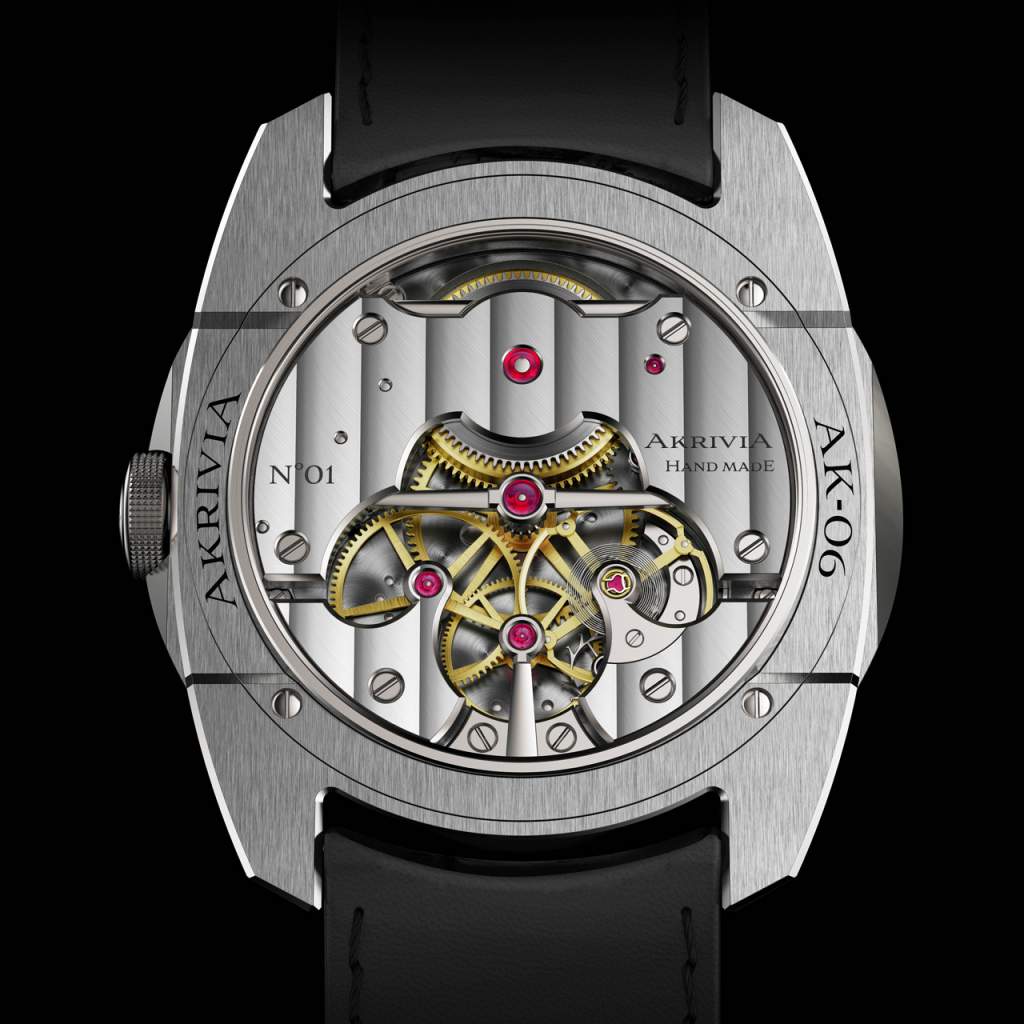 Since its creation in 2012, AkriviA has regularly proven its mastery of the highest level of Geneva’s watchmaking history and tradition with a series of haute horlogerie tourbillon wristwatches such as the Tourbillon Monopusher Chronograph, the Tourbillon Barrette-Miroir and the Tourbillon Regulateur.

Our newest creation, the AK-06, marks the long awaited, and first non-tourbillon wristwatch of the AkriviA collection. Like all our timepieces, this too is a watch that divulges its beauty, secrets and complexities to the discerning eyes of serious connoisseurs of watchmaking. Knowledgeable observers will immediately recognize the round dial under the hand engraved AkriviA nameplate as a power reserve indicator. This two part sub-dial, comprising inner and outer rings, rotates using a differential gearing to reveal the timepiece’s energy flow over the course of 100 hours of power reserve. The spacious winding barrel and its large jeweled pivot can be clearly seen through the sapphire glass on the back of the movement.

A creative approach to the traditional power reserve complication

Rexhep Rexhepi: “The inspiration behind my new interpretation of a power reserve timepiece was guided by the reasoning that for me as a watchmaker, (and perhaps also for owners of wristwatches), one of the most intimate moments is the act of winding the watch up. This is the moment when human energy is literally ‘given’ to the movement, making it come alive…So, I wanted to enhance this feeling for the person who will own this watch, by showcasing the power reserve and hand setting mechanism, allowing all the mechanical parts involved in these functions to be visually interactive for the user. This means that when you wind the watch up, or set the time, there is a lot of activity to be seen. These mechanical solutions have also in turn become visual figures, forming a decorative pattern and rhythm on the face of the watch, which change and move slowly as time passes through the day. This led to a new aspect of discovery, because until now, all the design and finishing of my movements was only visible from the back; with the AK-06 I wanted to ‘open up’ the dial side of the movement.”

The heart of the movement is designed with the same attention to details and also expresses Rexhep’s love of mechanical symmetry found on the dial side. The oversized center wheel on a jeweled bearing is placed on its own bridge, literally at the epicenter of the AK-06’s baseplate. This ‘epicentric’ location of the center wheel is a typical characteristic of all AkriviA’s watches to date and is equally complemented by the perfectly proportioned going train and balance wheel with its micro-adjusters, occupying separate bridges.

Rexhep Rexhepi: “In true high-end watchmaking, there is a lot more to examine than just the chronometric results and stability of a movement. The beauty of the movement itself was always a source of pride and a distinguishing feature, certainly in the tradition of Geneva, and this is a practice that I also want to keep alive. I am not just talking here about exemplary and perfect finishing; like good timekeeping and workmanship, those are always to be expected. What I am trying to say is that the movement architecture, the curves of the bridges, their visual balance and placement, size and proportions, everything has to be a united concept…For me this micro machine has to be beautiful in every way, on the outside and on the inside, in the places you can see as well as the places you cannot….”

A stable and long power reserve is always an added benefit to promoting excellent chronometric results. However, setting the time is often overlooked as a source of inaccuracies. For this reason, the AK-06C movement has a combined stop seconds and seconds reset functionality. The combination of these two results in a very rare ‘mini-complication’ that is rarely found in wristwatches today.

A normal stop seconds function to promote setting the time accurately is well known in watchmaking, however the 0-seconds reset in the AK-06 is an expression of a love for timekeeping accuracy. Through the use of a small heart piece, very similar to that found in the resetting mechanism for chronographs, the seconds hand returns to ‘0’ at the same moment the seconds stop running, when the crown is pulled out. This makes accurate time setting a very simple affair.

Rexhep Rexhepi: “For me, the additional work for this function was a typical example of a love for ‘pure watchmaking”. Of course, a watch must be comfortable to wear, beautiful to see and use and perfectly finished. But, the name AkriviA also stands for mechanical purity - and I never want to forget that my watch, under every condition, is there to tell the time through the course of the day.”

Although the fine finishing of a watch is an art form unto itself, it also fulfills practical functions. The visual effect is all the effort is of course beautiful to behold, but in fact, finishing changes the atomic structure of the outer layers of the metal itself, by simultaneously hardening the surface and sealing it off from the reception of microscopic amounts of moisture, dirt and possible oil from the interior of the movement. It is in fact an act of love with an eye to the longevity and protection of the watch to a time far into the future. This is also why extreme high quality finishing is at the heart of AkriviA’s philosophy.

Looking closely at the movement, you will see that the anglage created on the edges of all parts is rounded in what is called a bombé cross section, in opposition to the standard and fully or partially machine created anglage used today throughout Switzerland at large manufactures. This technique of rounded edges is much more time consuming to produce and cannot be prepared in advance by the use of machines. Starting with the basic flat piece of material with 90∘ angled edges, one of the first steps is to create a rounded edge by filing the edges into shape in several steps, which perfectly follows the edges equidistantly into every curve and corner. Furthermore, all sinks for the jewels also have a bowl shaped cross section, directly complementing this bombé effect of the rounded anglage This is followed by multiple steps of further finishing and polishing with a series of special wooden sticks covered in abrasive material as well as the natural wood itself. From the raw parts to finally finished parts, here is a general overview of the steps required to create perfectly finished watch parts and movement:

Finally, for the highest gloss, a stick of the Gentian plant is used. This plant grows freely in the mountainsides of the valley, and has been used for centuries in such work. The softer, inner layer of the wood is used on its own without additives in order to achieve an extremely high gloss finish. Such finishing is absolutely impossible to achieve with the standard use of electric tools or via CNC machining.

The AK-06 will be available in stainless steel, titanium, 5N rose gold and platinum with  various  possibilities of dial finishes and colors. First deliveries are planned for September 2017.