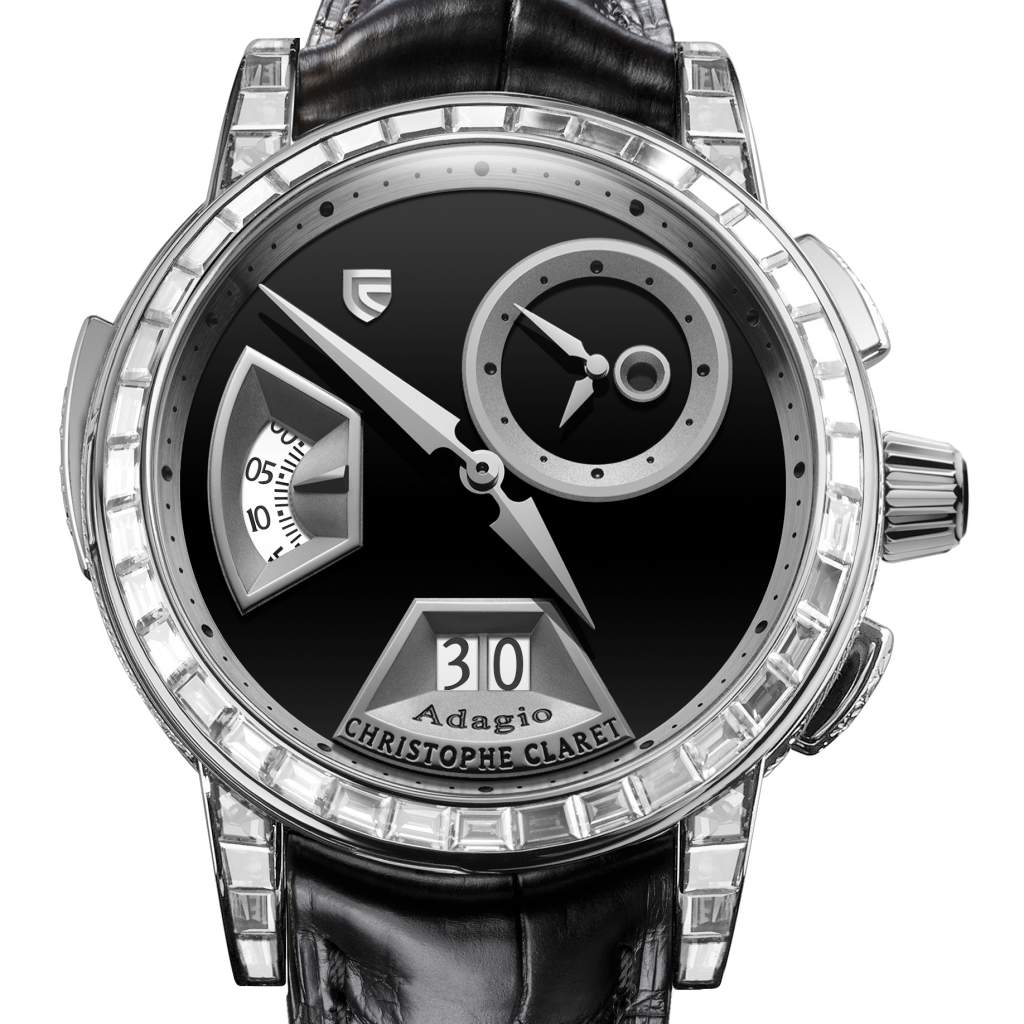 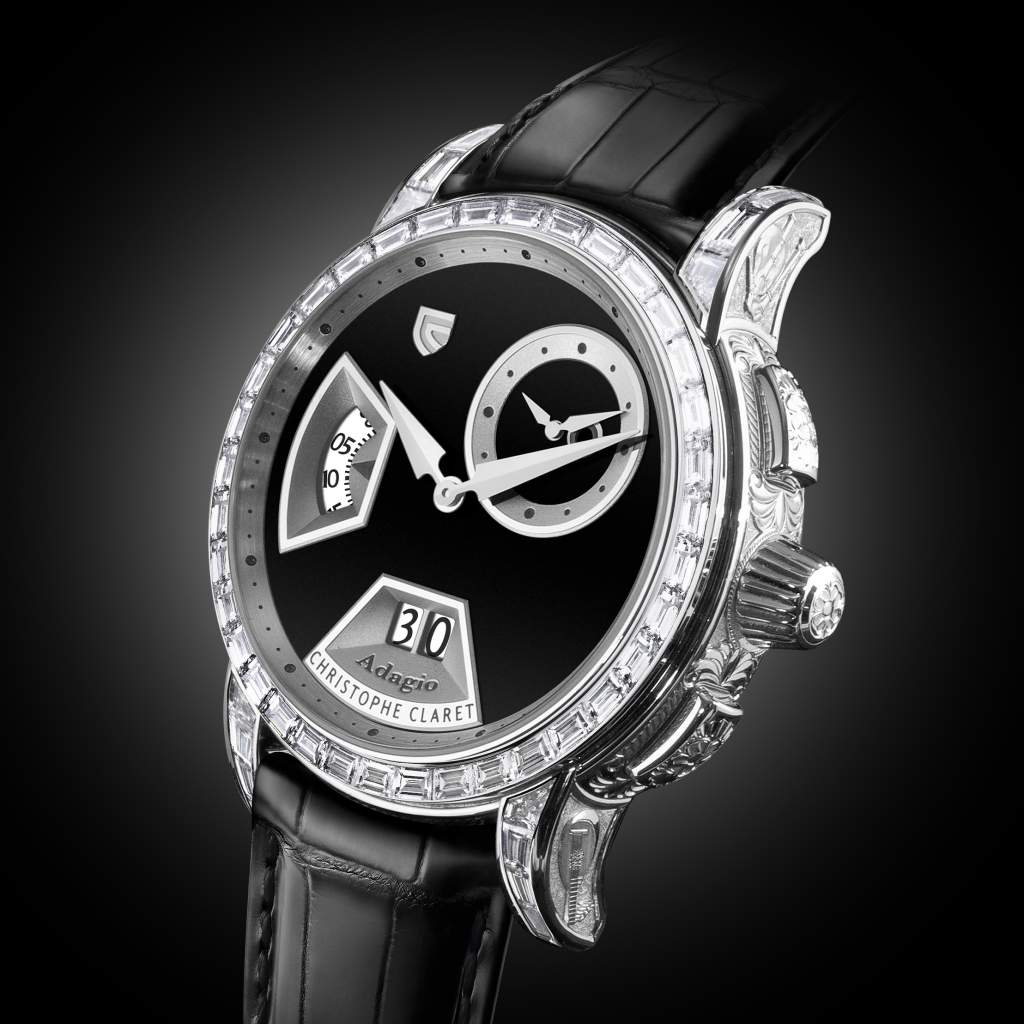 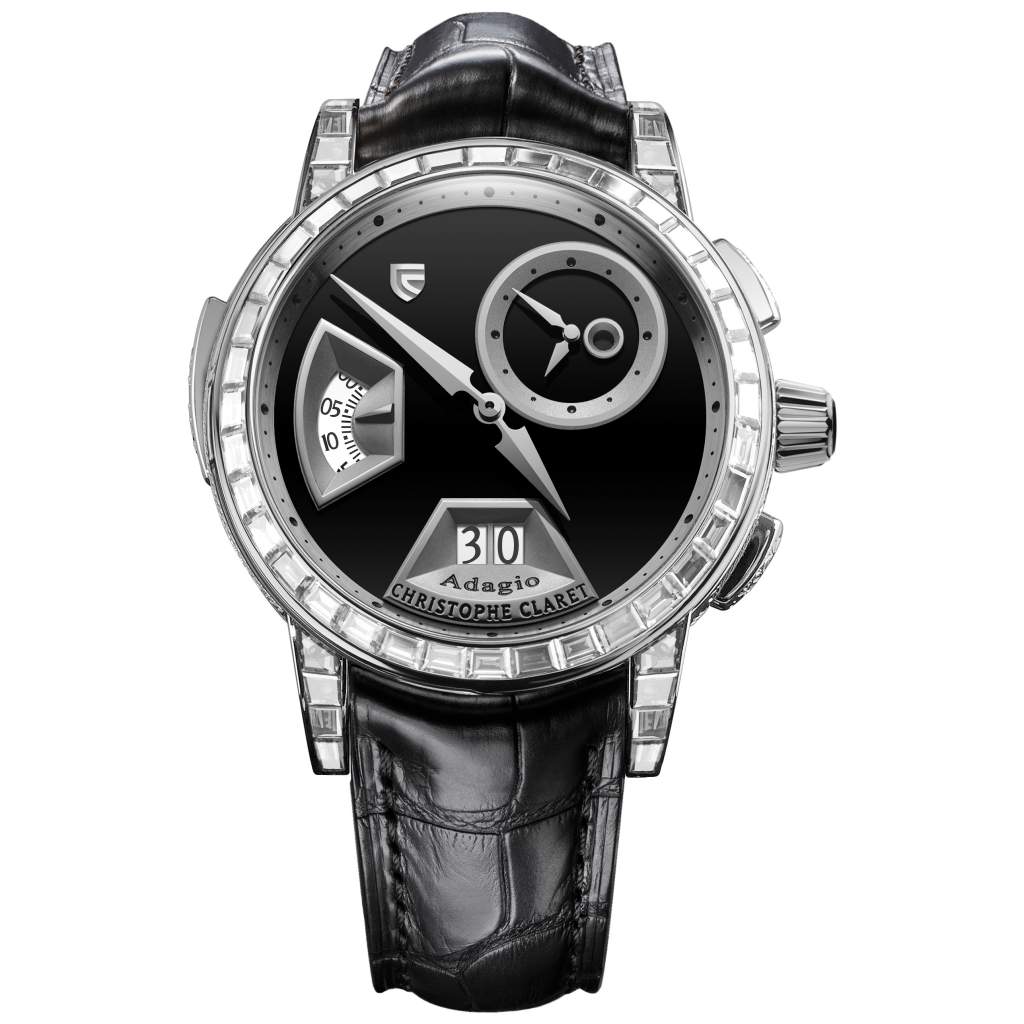 Finely engraved with volutes, dainty flowers and musical instruments symbolizing the Renaissance, the Adagio watch returns to center-stage, interpreted through several one of a kind models. Supreme artistry thus adorns this minute repeater that is combined with large date and dual-time displays. Admiring and listening to these creations will take connoisseurs on an aesthetic journey through the refinement of time.

Christophe Claret would love to have been born during the Italian Renaissance, a period that he appreciates as much for its history as for its aesthetics, its artistic refinement and its intellectual thought. He makes no secret of this personal penchant – better described as a passion that has become an art of living for him – and some of his collections vividly betray this taste for ornamentation and classicism.

The watchmaker’s fascination for 16th century arts is once again conveyed through the one-of-a-kind Adagio creations masterfully engraved by Neuchâtel-based artisan Eddy Jaquet. Working freelance for more than three decades, he is gifted with a rare expertise blending patience, meticulous care and artistic creativity, enabling him to join eye, hand and tools in sculpting matter. These one-of-a-kind new Adagio models were born from a fruitful dialogue between Christophe Claret and the engraver. A concerted, lengthy, passionate and fascinating quest to strike the perfect chord, to define the ornamental motif for the case, and above all to compose the six Renaissance musical instruments engraved on the lugs and the minute repeater sliding bolt. With a degree of finesse that requires a magnifying glass to appreciate each detail, a lute, a hurdy-gurdy, a tambourine and bagpipes appear on each of the lugs, while the minute repeater sliding bolt features two instruments: a sackbut and a bombarde, the respective ancestors of the trombone and the oboe.

In order to highlight these six instruments, notably through remarkable contrasts, the engraver made ample use of the pounced ornament technique used for artisanal medals. Domed or flat surfaces, curves and angles, matt and polished areas… By cutting out the material to be sculpted, by carving it, scraping it or smoothing it down, the engraver successfully creates an amazingly realistic depiction further accentuated by light effects. The fold of a fabric, the slenderness of a string or the softness of wood are revealed with absolute precision.

From yesterday to the present day

It takes around 130 hours of work for the engraver to craft each of these one-of-a-kind models, on which the abundance of the motifs adorning the 44 mm case strikes a powerful contrast with the total purity of the watch face. The deep black onyx or hawk’s eye dial displays the functions and complications in an extremely contemporary spirit. Beating steadily behind the scenes, the 455-part Manufacture Caliber SLB88 drives central hours and minutes, small seconds in a 9 o’clock aperture, a large date appearing at 6 o’clock, and a dual-time (hours and minutes) display with day/night indication in a 2 o’clock subdial.

Melodiously chiming the hours, quarters and minutes on demand, the “cathedral” gongs of the striking mechanism are fitted with a patented device that prevents them from colliding as they vibrate under the hammer blows. The large date with its unparalleled construction is also patented. This 34 mm movement with a 48-hour power reserve features finely decorated bridges. The crown is also equipped with a safety device: when the barrel spring is stretched to the full, a mechanism uncouples the stem in order to prevent any damage due to excessive tension.