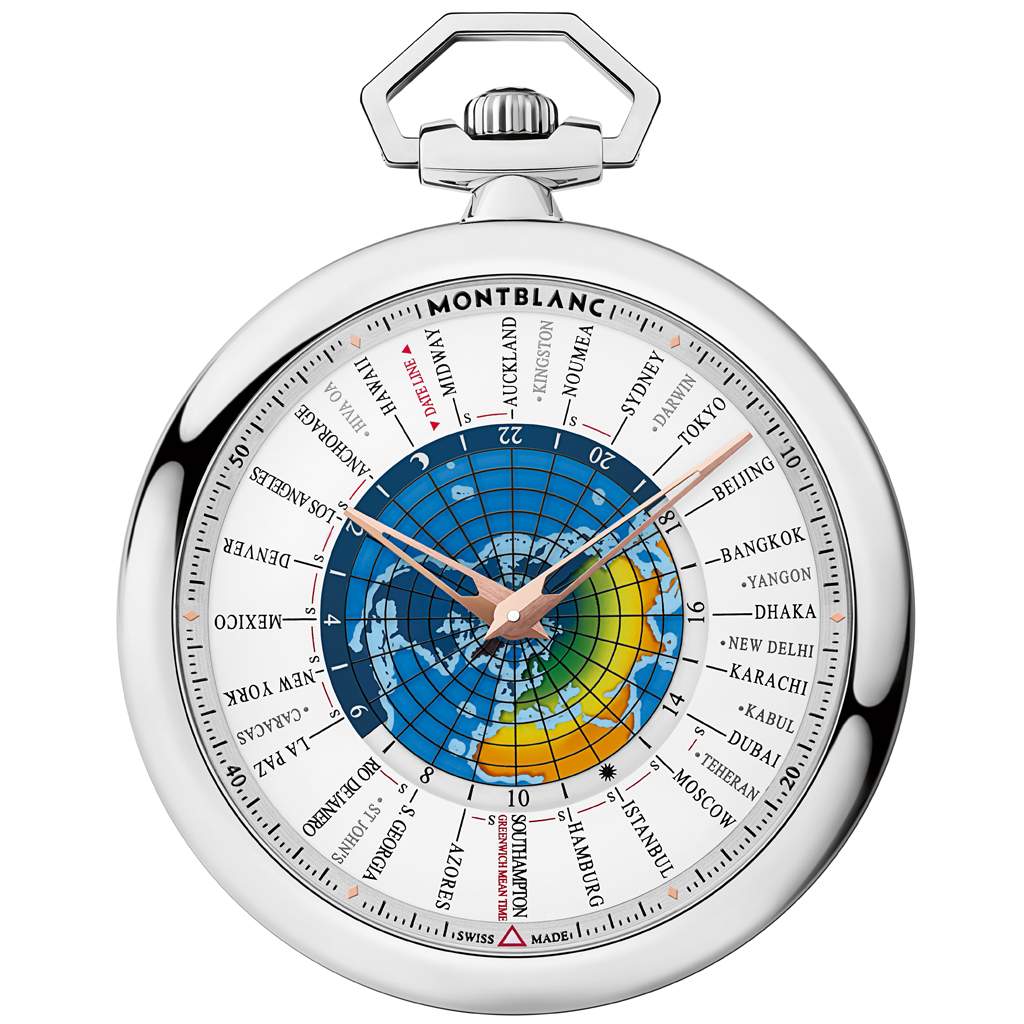 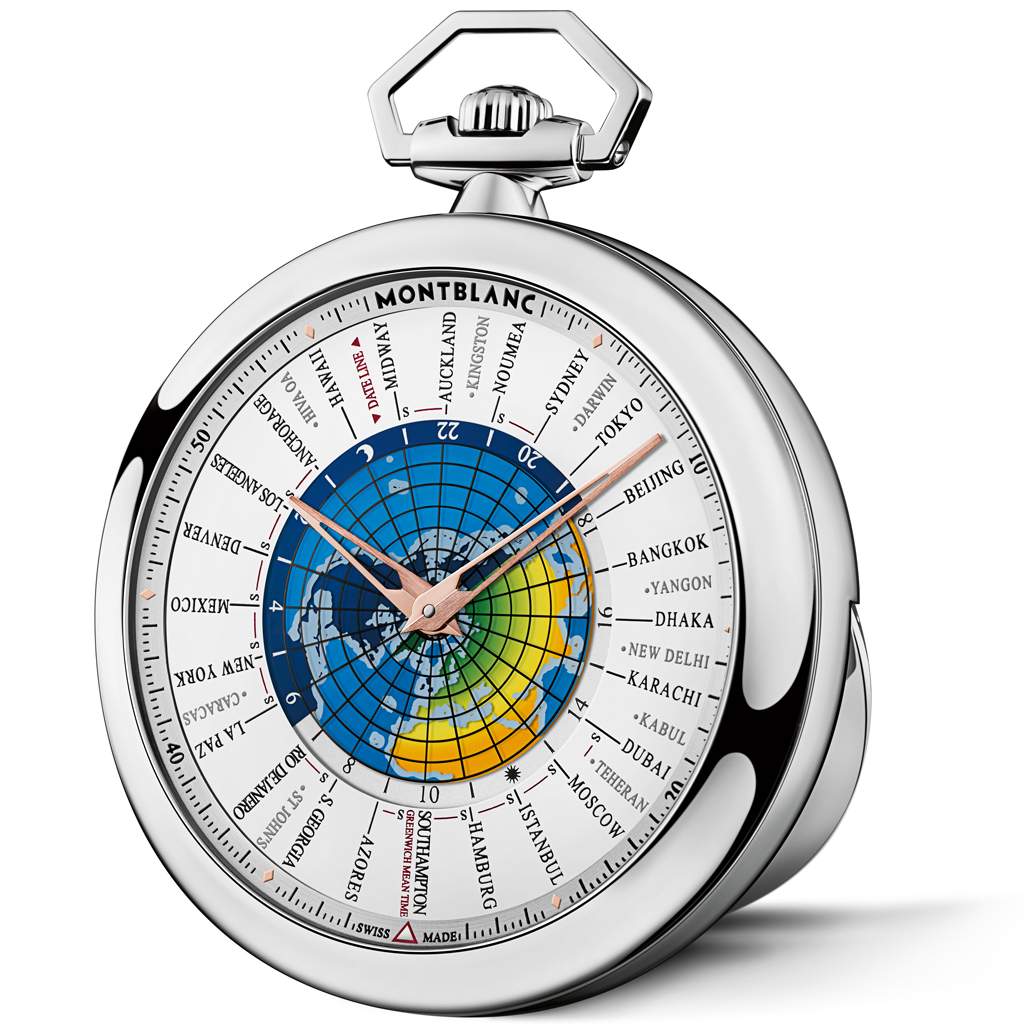 Montblanc marks its 110th anniversary this year with a new 4810 Collection, building on this best-selling line that was first presented in 2006 for the Maison’s centennial celebrations.  The new 4810 Collection respects all the codes of Montblanc’s watchmaking, with its strong, elegant and sporty design, offering a new sophisticated interpretation of this much loved 4810 Collection for the modern traveller who needs a performance timepiece he can rely on.

It was in 1906, during a booming period of manufacturing, that three pioneers travelled to America – engineer August Eberstein, merchant Alfred Nehemias and stationery trader Claus Voß – inspired by what they discovered. They developed a writing instrument with non-leaking technology and a piston convertor.  Eberstein was the visionary engineer of the trio, and had spent many years researching micro mechanical innovations in the United States and England. His vision of performance, innovation and perfect quality became the nucleus and driving force of Montblanc.  Voß, on the other hand, was the entrepreneur. He had been actively seeking for innovations with unique development potential. When he met Eberstein he immediately recognized his creativity and passion for engineering and knew he would be the perfect partner to complement his own entrepreneurial drive.

In 1910, the three founders adopted the name Montblanc, after the highest mountain in Europe, and made it a symbol for their vision for excellence. This desire for the highest quality translated into ultimate performance, true innovation and the finest craftsmanship, values that continue to drive Montblanc today.  The peak of the Mont Blanc Mountain measures 4,810 meters, a number which has always been an iconic figure for the Maison. Today this number is reborn in the new 4810 Collection and honours the spirit of excellence that was set by the Maison’s founders when they began their incredible journey 110 years ago.

The beginning of the 20th century was an exciting time for innovation. It marked a departure for new horizons especially with transportation across the Atlantic driving international commerce and cultural relations.  Thanks to ground breaking new inventions, the rise of the marine steam engine and improved navigational methods, there was a quantum leap in sea travel.  Passenger liners competed against each other for the Blue Riband award—a prestigious prize for the fastest crossing of the Atlantic Ocean.  The record was based on average speed, as ships took different routes across the ocean, and only recognized the fastest speed westbound against the challenging Gulf Stream.  This much-coveted award attracted both passengers and freight companies who sought out the fastest and most powerful ships. The Blue Riband became a true symbol of distinction and high achievement and its spirit is part of the new Montblanc 4810 Collection, embracing peak performance and horological excellence.

During these enterprising times, the cities with the largest ports experienced the most vigorous growth and development, becoming hubs for trade, cultural exchange and innovation.  The port of Hamburg was among them; as Germany’s largest port it soon became referred to as the country’s “Gateway to the World”.  Thanks to the port, the city of Hamburg was thriving with international trade, but also the manufacture of Germany’s own sumptuous ocean liners, which were quickly recognized as the world’s most important and modern shipping vessels. Montblanc’s roots were set down in Hamburg during these dynamic times and are celebrated in the new Montblanc 4810 Collection from both a technological and aesthetic point of view.

Montblanc unveils a limited edition in its Montblanc 4810 Collection – the Orbis Terrarum Pocket Watch 110 Years Edition. This timepiece finds its inspiration in the golden age of travel across the Atlantic Ocean when Germany was leading the way with its powerful and lavish cruise ships that were a symbol of the explosion of industrial and artistic innovation occurring at the time.  All the ships crossing the Atlantic at this time strove to win the Blue Ribband, an award given to passenger liners breaking the speed record westbound against the Gulf Stream. This recognition was the utmost achievement for excellence and performance, and is the inspiration for this new limited edition. This limited timepiece pays homage to this era with different artistic illustrations of the world’s oceans on its unique dial.

This is the first time Montblanc has created a pocket watch, and what better occasion than the Maison’s 110th anniversary to introduce such a new timekeeper into the 4810 Collection.  The Montblanc 4810 Orbis Terrarum Pocket Watch 110 Years Edition not only harks back to the beginning of the 20th century when pocket watches were the timekeepers of choice, but also features the highly appreciated world timer function—the perfect complication for the modern traveler.

Setting the timepiece is simplicity itself. The wearer starts by setting the home time zone by pressing the corrector between 5 and 6 o’clock until the home city (or the nearest city indicating the wearer’s own time zone) is positioned in front of the arrow at 6 o’clock.  The hours and minutes are then set via the crown at 12 o’clock, paying attention to turn the hands until the central map features the correct day/night indication. Once complete, the 24 time zones can be easily read at a glance thanks to a large open dial. Travelling is equally simple, as the wearer only has to press on the corrector between 5 and 6 o’clock until the new local time is featured in front of the red arrow at six o’clock. The day/night indicator and the hour hand also advance with each push, requiring no further setting as the home time doesn’t change, keeping track of the time simplicity itself.

Powered by the Calibre MB 29.20, the world timer complication has been developed and assembled entirely in-house by the Maison’s watchmakers. The dial is highly legible thanks to the 53 mm “Lépine” style steel case and a pure design, which leaves plenty of room for the 24 city names. The multilayer dial is crafted out of layers of sapphire crystal showing the continents as viewed from the North Pole. Around the map are the names of the 24 cities representing the different time zones, while under the map a disk indicates the passage of day and night, as well as the 24 time zones. This disk rotates with the movement mechanism, causing the continents to change colour as the day evolves into night.  The size of the disk depicting the globe and the names of the cities is much larger in this 4810 Orbis Terrarum Pocket Watch than it would be in a wristwatch, making it more challenging to turn.  The Calibre MB 29.20, however, was more than strong enough to support the extra size and weight, enabling Montblanc to present this new larger dial aesthetic.

The pocket watch is completed with the addition of a refined steel chain that has been crafted like a ship’s rope, recalling the theme of Atlantic crossing and the Maison’s passion for aesthetic perfection and technical performance, just like the luxury cruise liners of the last century that conveyed the innovative spirit of the age.