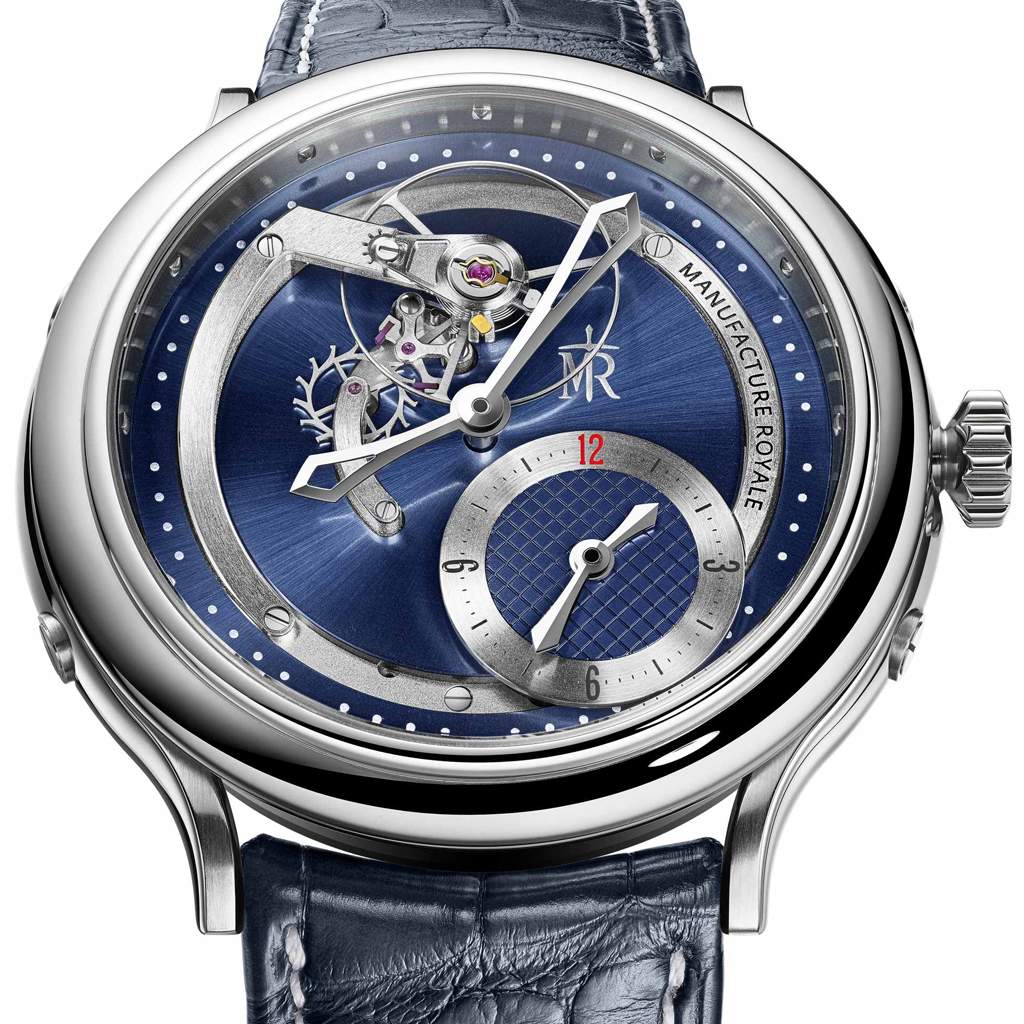 Manufacture Royale is enriching the 1770 Voltige line with a new version, the 1770 Haute Voltige. Manufacture Royale designed it as an aspiration to freedom, with an easy-to-set second time zone and a raised balance wheel that dominates the dial.

"Man is free at the instant he wants to be", wrote Voltaire, the eighteenth century philosopher and Founder of Manufacture Royale in 1770. The 1770 Haute Voltige encourages the freedom to travel by offering a choice of two time zones, directly adjustable by the crown. The 1770 Haute Voltige is freed from the constraint of one single time and instils a taste for adventure. In this highly ethereal composition, Manufacture Royale has raised the balance wheel and counter on the second time zone above the dial, like a stunt-flying demonstration.

The two finely sculpted bridges of the 1770 Haute Voltige progressively rise up on either side of the dial. The first, very ethereal, bridge holds the balance wheel above the setting mechanism, whereas the second bridge harmoniously positions the second dial at a different height. These raised elements create an impression of lightness and movement with captivating shadow and light effects.
The construction offers a view of the oscillations of the ultra-light balance wheel and the motion of the escapement, the beating heart of the watch.

Positioned at 5 o'clock, the small dial of the second time zone contrasts with the sunray of the main dial through a quilted pattern and fine polished rim. Open-worked hands indicating the reference time and full hands on the second time zone complete the very characteristic architecture of the 1770 Haute Voltige, for optimal legibility.

This new movement is called the Calibre MR07. It is the 7th developed by Manufacture Royale since its rebirth in 2010 and thus demonstrates the creative energy and skills brought together in its manufacture.
This calibre highlights a double technical feat: a central hour-and-minute display linked to an off-centre secondary time zone display.
This second time zone comprises an additional difficulty with a setting by the crown instead of the usual push-buttons.  This offers comfortable use and pares down the case middle. Its display on an independent dial adapts to all types of time zones, including rare ones, which vary by a half hour or a quarter of an hour.

The hand-finishing of the Calibre MR07 is visible through the transparent sapphire caseback. The connoisseur will notice the three bridges including a very ethereal one whose shape, imitating that of the rotor, gives a view of the multiple movement wheels.

The 45 mm diameter steel case features the aesthetic and technical codes of the 1770 collection. It features two lateral stretcher pieces that grip the central part and form the horns at each end. Four screws fix them to the case on the side. The lines are taut, both gentle and powerful, and give the 1770 Haute Voltige the energy and flexibility of a genuine instrument for travellers.